Because I don't have shit else to do.

I've spent a lot of time around the house the past few days.  New house, lots of shit to do and all that.  I really didn't do much around the house though.  Instead I spent time actually enjoying our new domicile.  Being on call for work meant that I had to be near a computer/WiFi, but I got to a point where i just had to get out of there.

The bets thing I could think of was to grab a bike and go on another adventure.  I'm tired of the road bike though.  I'm primarily a mountain biker (when I ride at least), but I didn't have time to drive to a trail.  I don't know my surroundings well enough yet so I took my mountain bike out on the road again, hoping to find something, well anything, that would be fun to ride. 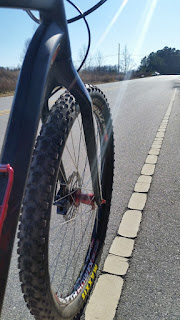 With empty roads ahead of me, I pedaled away toward Parts Unknown (Where all those wrestlers from my youth were from.)  I crossed an Interstate... 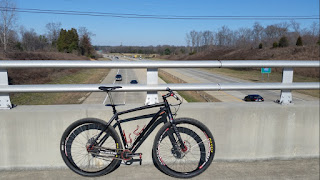 I was still sorta "out in the country."  I haz picture of cows to prove it. 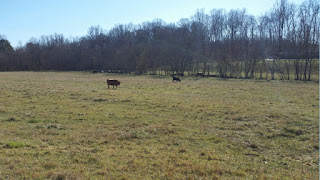 I ended up in a neighborhood, but it was still quite nice.  There is a little creek that runs through it, so I stopped for a spell. 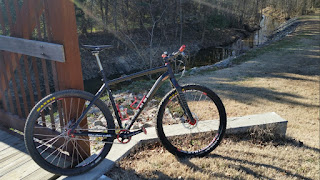 I wandered around for a bit, with no particular destination in mind.  I eventually spotted some woods nearby, and my bike (or The Force) directed me to explore them.  I'm glad I did because I found a little trail. 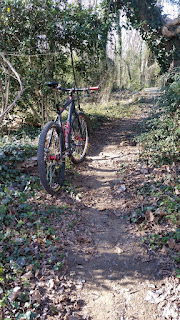 If I was in the city, I'd think this was a homeless path (i.e. bum trail.)  But I was still way outside of Charlotte proper, and this was a "real" trail.  Maybe not for bikes, but someone had made this path through the woods.  And that "someone" also made this janky ass bridge... 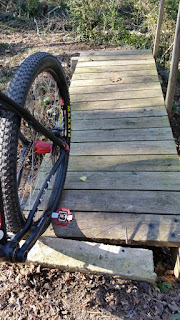 It needed some work, just like the rest of the trail.  I explored a bit, and realized that something this close to my house could be really fun if I put a little effort into it.  There's plenty of land to have a little fun place to play with the bikes, and I might be able to pour syrup on shit to make pancakes so to speak.  I was happy I found it, so I started making plans to return with tools.

I felt like I was pushing my luck with being on call and not near my computer, so I started heading home.  I kept thinking about this new (to me) trail and what I could do there.  One of my bike friends lives nearby, so maybe I'll hit him up too.

Oh yeah, and on the way back home I stopped by to see my horse friends again... 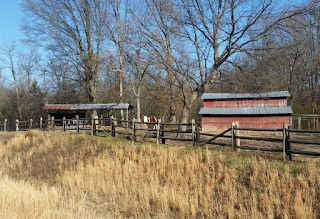 They love me.  I'm glad someone does.

what - up, Chris. I was trapped behind the PC this weekend too. My adventure consisted of Raking Leaves in the front Yard.