Part Two For No Particular Reason

We were just sitting there drinking beer and watching this girl hang out on the zipline.  It seemed like forever.  I wasn't worried because we had plenty of beer, but I reckon that she was concerned.  A while later, some guy (that works there presumably) rolled out on the line to attempt a daring rescue. 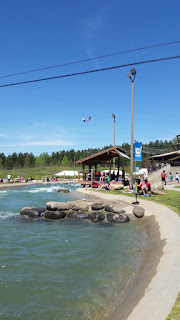 He pulled her back in and it was all over.  Not very dramatic I must admit, but it made for good entertainment.  We decided that we should head out, so after the beer was consumed we rolled out on our bikes to hit one last trail on our way out.  I was joking about how Lunchbox always gets a flat when we ride mountain bikes and that we finally made it through a ride without that happening.  I was happy, but I know he was.  We exited the park and hit the road home.

About a mile from the house, we hit a downhill and I was flying.  I looked over my shoulder for a second, and I noticed that my two companions were falling way behind.  I turned around to head back, and when I got to them I saw this: 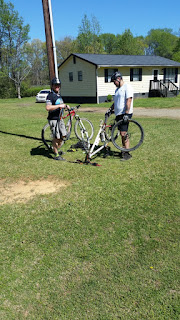 Less than two miles from home, on pavement, and the man-child got another flat tire.  He has such bad luck.  Luckily Ed had a tube so we were on our way pretty quickly.  Once we got back into the neighborhoods, Lunchbox had apparently forgotten about his flat tire.

He was back to having fun again. 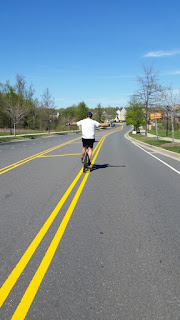 Despite the small issue, it was a great adventure.  I said it before, but I'm happy to be in a new place that lets me ride to some fun trails pretty easily.  We decided that some Mexican food was in order at this point, so we cleaned up and headed down the road to eat.

The little lady decided to join us at this point too. 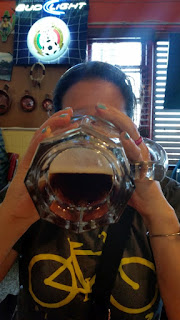 The food was good, but the highlight has to be when Ed shouted out, "Found him!"  Unsure what he was talking about, I took a picture to see who he he'd spotted. 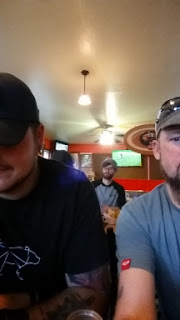 Have no idea who this is?  Mebbe Lunchbox's clever edit will give you a big hint: 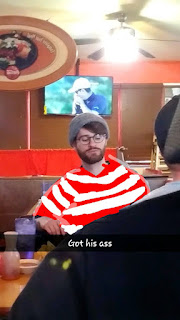 It wasn't as difficult as I thought it would be.

Such a rad day.