With the 6 Hours of Warrior Creek only two days away, I was itching to get out on the trail for one more ride. When I said I wanted to try to get out to a trail after work (instead of riding the road bike), Little Miss Sunshine suggested that I hit up the U.S. National Whitewater Center. I liked the idea, especially since it’s the closest place around here that has any kind of toughness to it. I packed up my bike and headed over there after work.


I was hoping for a trail ride so I could make sure that my bike was in working order, hoping that I would have plenty of time to make any repairs or adjustments. Also, I had another test to do. Even though I’ve done several reviews on the Awesome Strap, I wanted to try something else. Of course, the Awesome Strap passed with flying colors for it’s intended use, but I had another idea. Since I have a few extras, I decided to see if I could use one of them to hold my manual pump somewhere on my frame, rather than carrying it in my jersey pocket and risk losing it. The Back Forty was meant to hold a ton of shit, but could it manage holding a measly air pump all by its lonesome? 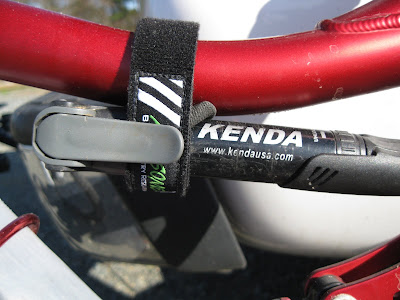 I didn’t have a lot of time, so last night’s ride was far from epic. I did however; get to test both my bike and my bike handling skills to their fullest. Just like the first time that I tested the Awesome Strap, I tried to keep from checking it the whole ride. Although I like my old shitty Kenda hand pump, it wouldn’t be a big deal if I lost it. Besides, I was testing the limits of the Awesome Strap, and I wanted the test to be accurate.


The ride went well. I didn’t blast through the trail at a super-human rate of speed (I’m not capable of that anyway.) I kept a decent pace though, and didn’t stop to rest. I did stop once though, because my sunglasses were coated in sweat and I couldn’t see. Even at that 5 second stop, I didn’t look down to see if my secondary Awesome Strap had lost its contents. I just cleaned off my glasses and got on my way.


After completeing my one and only lap, I pulled into the parking lot to see if I needed to buy a new pump. And wouldn’t you know, it was still there, in all its Awesomeness. The damn thing didn’t move an inch either. Even though the Back Forty is designed to carry tons of crap, it did just fine carrying one lonely, ancient hand pump. The folks at Backcountry Research are even more awesome than I originally thought. Big thanks to Richard at BR for hooking me up with extra awesomitude (yeah, I made that word up.) 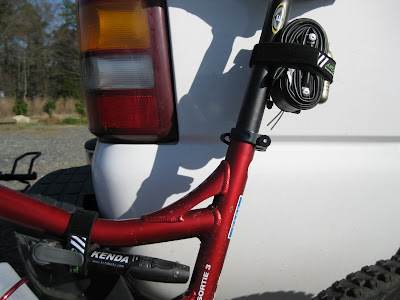 Now I am twice as awesome.

I only found some minor things wrong with the bike, which was expected. I’m only working a half-day tomorrow, so that will give me plenty of time to correct the issues. I have a small braking issue, plus a few not yet identified squeaks to address. It will be another fun day of bike mechanicin’. I’ll probably be back here tomorrow as well, so lucky you again. See ya.
Posted by TheMutt at 8:54 AM