Yeah, last night was another race in the Summer Series, and I decided to give it a go. This turned out to be a bad idea, I later found out, but I’m glad I tried anyway. It’s been far too long since I’ve tried to race competitively anyway, but last night was far from competitive. I learned a few lessons as well.


Lesson 1: Don’t take your newly assembled bike out to a race for its very first ride.


As you probably already know, last Saturday I quickly moved all of my parts over to the new frame after breaking the The Big O. I was in a hurry so I could try to race in the Southern Classic Series race at Dark Mountain Sunday morning. In my haste, I neglected to tighten a few bolts here and there, and I also didn’t take the time to adjust the gears properly.


When I tried to get in a warm-up lap last night, I immediately noticed something wrong. My crank arm fell of, due to the fact that I never bothered to give it the once over after the build. Shitty mistake on my part, but at least I had time (I thought, anyway) to fix it. I hurried back to my truck and grabbed some tools, but the race start was rapidly approaching. I got it back on, but it probably wasn’t the best mechanical job I’ve ever done. I took a few minutes to spin around the parking lot, but by them it was time to head down the hill to start the race. This leads to my next lesson learned.


Lesson 2: Don’t try to race when you haven’t warmed up properly.


You would think that I would remember this, since it’s happened so many times before. This time though, it wasn’t totally my fault. Well, unless you count the fact that the B-43 mechanic did a piss poor job, which resulted in me having to perform a little pre-race maintenance. My actual race was a sufferfest, and I struggled the entire time. Not just physically though, since my shifty bits weren’t shifting properly. I was skipping gears all over the place, which made the race even more difficult. Maybe it’s time to hire a new mechanic.

Since I’m not a mega-super-fabulous mountain bike racer, I just don’t have the budget to hire a new mechanic. Sure, I have a few sponsors, but that only gets me a little product once in a while (which is fine, by the way.) I’m not big-time enough to hire any full-time staff for the team here at B-43. So, I have to do the next bext thing and try to get a mechanic to work for free (or food, whatever.) I looked around the B-43 compound, but it was slim pickings. I’ve narrowed it down to two choices. 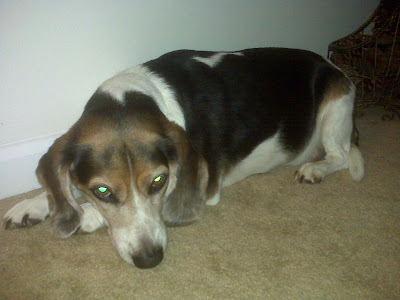 This is Bailey. He’s not good for much, other than sticking his nose in places it doesn’t belong, and keeping me awake all night with his little doggy dreams. He’s actually kind of dumb, but he makes up for it with enthusiasm. I would only have to pay him with dog food, since he doesn’t drink beer. I’ll give him a thourough interview this evening to see where he stands. Let's go to the next potential candidate. 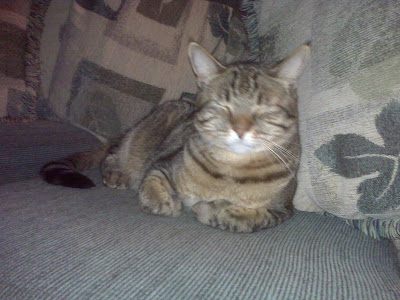 Next up is Paul. He’s the more logical choice, since it’s all I can do to keep him out of the garage every day. He seems to really like bikes, but he has a bit of a lazy streak in him. Also, I always seem to find him on whichever piece of furniture I want to park my ass on, so he does get in the way sometimes. He’s a bit fussy too, but I guess that is normal for an adolescent male feline. The plus side is, he’ll work for cat treats, which is a really cheap alternative to the standard mechanic pay (you know, money or beer.)


That’s all I have to work with right now. I’m sure there will be a learning curve for either one of these to candidates, but I’m willing to train them. If they can’t perform their job functions, it won’t make much of a difference. My race season is all shot to hell anyway, so I can’t imagine it getting any worse.


I know, I said I would talk about the mystery sponsor box I received, but you’ll have to wait. I’ll get to that tomorrow though, I promise. Meanwhile, I gotta figure out this whole mechanic situation.
Posted by TheMutt at 9:49 AM

I vote for the cat. Just because he's cool.