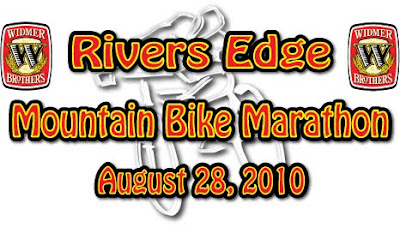 I’ve been hinting around about possibly doing the River’s Edge Mountain Bike Marathon (which is tomorrow morning by the way.) I haven’t been “training” for such an event, but that doesn’t worry me in the least. I can suffer my way through it if need be, and that’s what I was planning on doing. So, the fact that I’m not in “Endurance Racing Shape” doesn’t affect my decision whether or not to participate in a 50 mile mountain bike race.

With all of my bike issues as of late, you would think I was worried about breaking something during such a grueling event. Well, I’m not worried, since there’s not much else left to break. Shit, maybe I just jinxed myself. Anyway, I took The Big O out for some test riding at the U.S. National Whitewater Center da udda night, and everything was fine. Well, that is until I went barreling down the Carpet Trail at a reckless rate of speed.

I didn’t crash or anything, but I might as well have. While I was celebrating the fact that I made it down the last section without a flat (unlike the XTERRA fiasco), I noticed something strange. I tried to pedal out of the flat section to get back onto the main trail, but nothing happened. My shifter was shifting, my chain was uh, chaining, but my wheels weren’t playing along. Basically I was pedaling but going nowhere. I flipped the bike over and noticed that my cassette would spin freely in either direction, and it wasn’t engaging the wheel like it normally should. That’s not really a trailside repair, so I walked it out.

I haven’t had time to look at what’s going on inside my rear hub, so basically I would be without The Big O for any race/ride this weekend. I’ll get to it eventually, and I know I can take care of it somehow. Besides, I have two bikes, so it means that my brand new trusty Goose gets the nod for any racing this weekend. Bike problem solved.

That covers the riding fitness and mechanical issues, but I had something sneak right the hell up on me this week. With all of the riding I’ve been doing, I’ve apparently developed some sort of knee ailment. I’ve had issues with this knee in the past, but I’ve been mostly pain-free for quite some time now. Well, up until this week anyway. So, I guess this means that I’m still not sure if I’m doing the River’s Edge.

I know, you came here today and had to put up with all of this babbling and nonsense, and I still haven’t given you a definite answer. I’m not gonna call it quits just yet, so it will be more like a game-time decision. When I arrive at the race tomorrow morning, I’ll figure out if my knee can take the abuse of riding 50 miles. If I do it, I want to be able to do the whole thing and not just quit after one lap because I’m in pain. If I don’t race, I’ll just hang out and volunteer. Either way I’ll get some interesting stories out of it. Meanwhile, a little ice is in order until tomorrow morning: 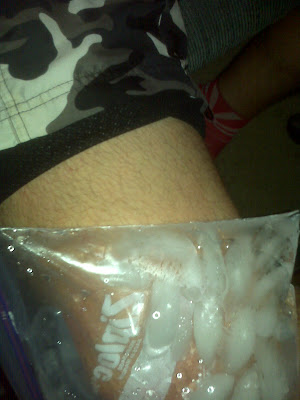 I have the same problem with knee pain sometimes. Adjusting the seat helps but I have found (either through the placebo effect or actually it working) that a knee strap helps. You can also pick them up for like 10 bucks which is nice too.

I was using the knee strap thingy full time up until recently. When the pain became so bad, I switched to the full on bionic knee brace. Hopefully this will heal up soon. See you there tomorrow morning.