Do I Need A New Wingman?

I didn’t mean to leave y’all hanging yesterday, but I had to cut it short. If your attention span is anything like mine, a big wordy blog post can cause you to lose interest. Okay, I did mean to leave you hanging, but that was only so you would keep coming back here to read my nonsense. I write, you read. It’s simple. When I left off yesterday, I had taken my bike to a local shop, which was suggested to me by the Dirty Party Cycle and the fine folks at Diamondback. The Dirty Party Cycle is a stickler for good customer service, so how could I go wrong?


I headed over to the quaint little town of Lincolnton, North Carolina with my broken bicycle, and hoped for the best. I was prepared for the worst though, when I arrived at Ride-A-Bike Bicycle Shoppe. I had never been there before, so I didn’t expect them to jump all over the chance to help me with my warranty issue. Even though the shop was highly recommended by the DPC, I still thought that there was a chance that I would never ride another full squishy Diamondback again. I reminisced for a moment about my poor little Goose (in it's non-broken form of course.) 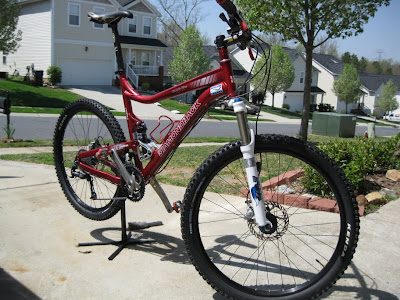 The shop was actually pretty cool, and it had that nice home town feeling to it. I was greeted immediately by the owner, Chafin, and he asked what he could do for me. I told him about my bike issue, and that my former shop had closed down. He said to bring my broken bike around to the service entrance, and he would take a look.


I was still pretty nervous at this point, but Chafin made me feel better with his assessment of the broken frame. He said the seatpost height looked fine, and this it was most likely a manufacturer defect. Whew, I thought. He parked the bike in the back and headed over to the phone to call Diamondback. Since they are located in the Seattle area (think about the time difference), the warranty guy wasn’t in the office yet. Chafin left a message, and now I would play the waiting game.


He took down all of my information, the serial number of the bike, and told me not to worry. These things take a little time, so I had to wait. I told him I was heading to Florida for vacation, and that I would call in a few days to see what they would do about my frame. I left the next morning for The Sunshine State, still with the wounded Goose on my mind. Would he be okay in his temporary home? 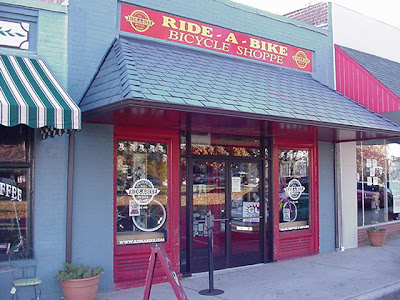 A few days later, I called up Ride-A-Bike to find out the verdict. Chafin told me that they would indeed do a warranty replacement on the frame, and that it will take a few days for the new one to get there. I told him to proceed, and I would await the next call.


The day after I got back from Florida (last Tuesday), I got a message on my phone that my new bike was ready. I called them back and said I would be right there to pick it up. After a short drive, I arrived at the shop to see my new ride. The fine folks at Diamondback Bicycles had sent me a shiny new 2009 Sortie 3 to replace my 2008 model. 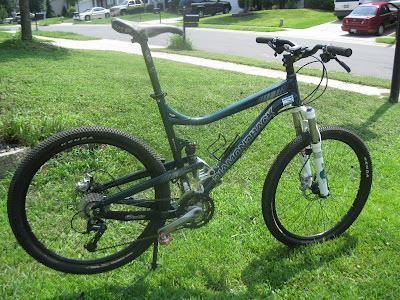 I was so happy to have a new frame, especially since it was nearly identical to my last one. Even though it’s not even close to my favorite color, I really like it. The color is called Metallic Deep Dark Sea Cave Green (WTF?), but it looks really dark so I don’t mind. Since I have an affinity for red, I had to do something about the whole color scheme for this new and improved version of Goose. All of my red accessories had to go, and I replaced everything with black (what I had in the shop.) Lizard Skins chainstay protectors and grips are on every bike here at B-43, so I was happy to have some black components readily available. The red Crank Brothers Candy pedals are still on there though, but the Big Brown Truck should be delivering some new ones any day now.

Everything else was easily replaced, although my headset spacers are not ideal. I had some of the black composite Cane Creek Interlok spacers to put on, but I have requested some shiny black anodized ones from my friends over there in Fletcher, NC. I hope they have heard my pleas for fashion conformity. Luckily, my Awesome Strap has a hint of green, so it compliments the whole “green bike” thing. That color must be a favorite of people in Seattle, or at least one could assume.


So, even though Diamondback Bicycles took care of my warranty issue, I have to give a huge thanks to my new shop, Ride-A-Bike in Lincolnton, NC. The customer service was great, and I was pleased with my new bike build. I’m throwing my support at them from now on, since I was really impressed with the service. I hope you, my legions of followers, will do the same. They’ve been in business since 1981, so I don’t think that they will be closing their doors anytime soon. I’m not easily impressed (unless it involves shiny new bike parts), so it means a lot to me that I found such a great shop. Now it’s time to plan a ride with the new and improved Goose, my Wingman in the Woods.
Posted by TheMutt at 8:03 AM

Green must be a seatle thing. Look at the Seahawks jerseys and my personal favorite soccer jersey, MLS team Sounders. Those are green