It’s been crazy around here lately, and I’ve been lagging behind. Some of these posts have been out of order due to various reasons, and I’ve been feeling like I’ve been in a time warp lately. I’ve been thinking about calling up Doc Brown so he can get me back to 1985. 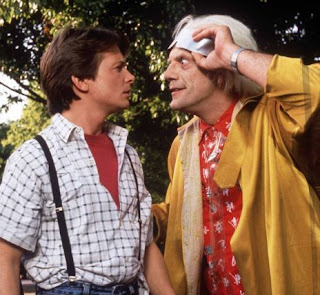 Well, 1985 is a little too far back, but I needed a good laugh so deal with it. Let’s go back to the weekend before last, when Little Miss Sunshine and I participated in the annual Blue Points 5K. I told her I would talk about it on here, but for some reason I never got around to it. Maybe I’ve been a little too busy lately breaking bicycle frames to worry about some little ol’ running event. Well, thanks to Doc Brown and his shitty DeLorean here it is. 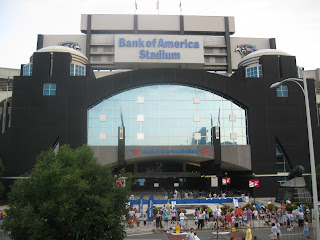 As you can see in the photo above, the event kicked off at the Bank of America Stadium here in Charlotte. Since this is the home of the Carolina Panthers NFL team, the running event corresponded with their fan appreciation day. We didn’t stick around for that stuff though, since my football loyalty lies with another team. Anyway, since football season is pretty much upon us there was a huge turnout.


The race was pretty much standard for a 5K, but there was some interesting stuff going on. Little Miss Sunshine has been spending the last year or so recovering from a stress fracture in her leg, so she’s easing back into this running thing (and the bike too.) We lined up in a sea of people to start the race: 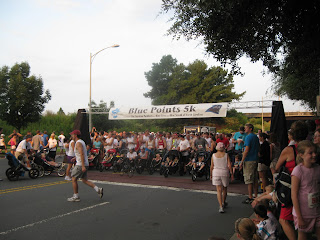 The baby joggers were the first to go, and we kind of hoped we would at least catch up to them. The rest of the group (including us) soon followed: 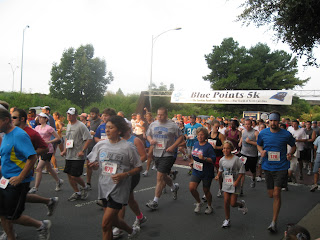 Like I said, there was some interesting shit out there. We got beat by some notable people, including this leathery guy: The best one had to be the blind guy, who has beaten me in several running races now. You gotta admire that kind of skill: 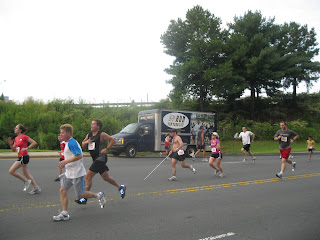 Our most notable running adversary was the King, and I don’t mean this crybaby that calls himself The King. I’m talking about the so-called King of Rock and Roll, Elvis. He hauled ass on the 5K course, jumpsuit and all. 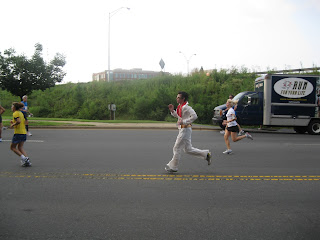 After all of the silliness, Little Miss Sunshine and I finally came strolling in: 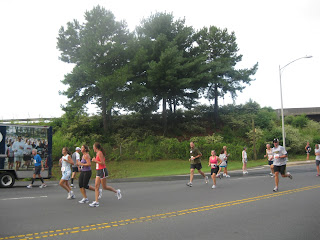 We didn’t do to bad, especially with the level of talent out there. There were about 1000 participants, and we finished somewhere around mid-pack. The highlight of the day for Little Miss Sunshine though,  was that she was able to meet her favorite sports mascot, Sir Pirr: 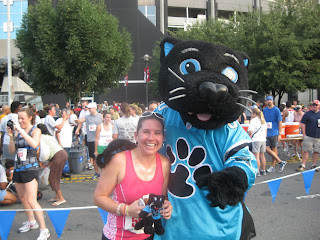 
She’s not a fan of that team either, but she just can’t resist a guy in a big fuzzy cat costume I guess. After surviving yet another running event, she was pleased with her injury recovery process. It was a lot of fun, and as usual the organizers put on a great event. I know, it’s not bicycle-related, but at least we’re getting off of our asses and doing something. Sitting around the house can make you very tired: 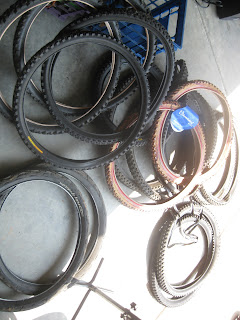 There, some bicycle shit for you. I’ll be back tomorrow with some more, including the mystery box that showed up from one of my sponsors. Stay tuned.
Posted by TheMutt at 8:28 AM

Isn't The King supposed to be fat?