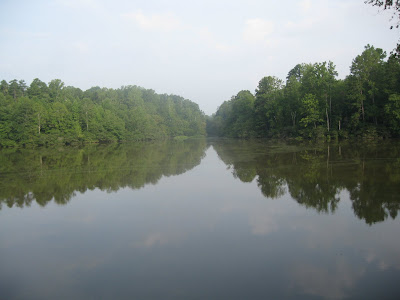 Saturday, Lunchbox and I got up bright and early and headed up to Lake Norman State Park for a little racing action. It was time for the annual Cackalacky Cup, and this time we were competing. The Dirty Party Cycle showed up to give a little volunteer assistance, and also to serve as the official B-43 photographer. Here was the obligatory pre-race photo: 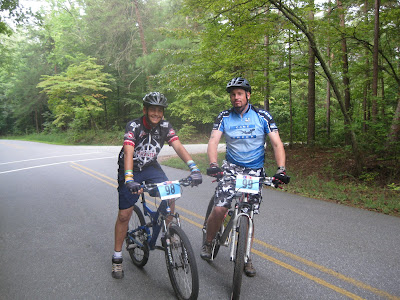 Although he was a little nervous, Lunchbox was ready to go. He’s never done this type of race before (and neither have I), but that didn’t mean that it wouldn’t be fun. We don’t ride the trails up there very often, but it’s so fun that it wouldn’t matter. This would also be the first ride up there for me on big wheels. Would I survive without breaking something this time? Would Lunchbox get on the podium in the Junior division? We would have to race to find out.


I was excited too, but only because I was out to have a little fun. I wasn’t trying to be super-competitive, and that always makes for a great race. I only do this for fun, and I don’t want to have it any other way. Anyway, the race consisted of two separate time trials, the first one being technical. Various obstacles littered the short course, and I was not prepared for any of them. When the race started, you immediately had to ride over a small skinny, which was supposed to be pretty easy. 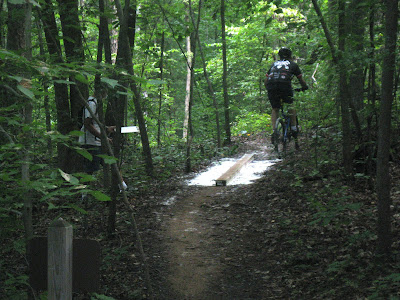 Then I was next: 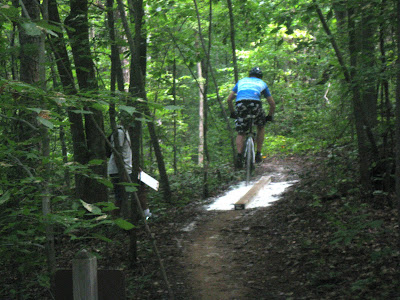 As you can see, neither one of us were successful. I’m not sure why, since this was one of the easiest obstacles I have ever seen. I guess we could chalk it up to race jitters. We both acquired a 30 second penalty for missing it. After a short while, we would come up on a set of cones, set up like a slalom course. Since the DPC wasn’t out there on the trail to get any photos, I have to tell you that we both cleared the cones with no issues. After the first set of cones, it was off to the next trail feature, the limbo. No photos here either, but that one sort of sucked for me. Since my bike is huge and I’m so tall, I couldn’t get under the first pole, which was about four feet off of the ground. I tapped it with my helmet, knocking the pole to the ground. Another 30 second penalty, but I would clear the second one. It was 5 feet off of the ground, so I had a little room to spare. Lunchbox cleared them both, probably because he’s still a little smaller than me.


The last obstacle was another set of cones, which were placed just before the finish line. These were a little more difficult, but we both managed to clear them with no problems. Even though last year I laughed at how much trouble the “big-wheel” crowd had with the cones, here I was navigating them on my own set of clown wheels. Here’s Lunchbox showing us how it’s done: 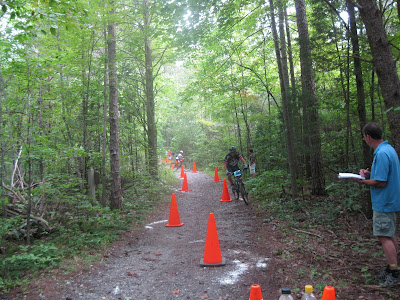 After the first time trail, we checked the standings. I was sitting in 8th place in my group, and Lunchbox was also in 8th in his. We would have to make up a lot of time on the speed time trial, which was held on a ~6 mile loop. When Lunchbox took off, he put the hammer down. I left the start line about a minute after him, and caught up quickly. As I passed him, I shouted some words of encouragement and told him to try to stay with me. I was going all out though, and he quickly faded into the distance. I had a lot of ground to make up, so I had to hurry.


When I crossed the finish line, I was hauling ass. In fact, I’ve never done that loop that quickly before, and I knew I made up at least a little time on my fellow classmates. I felt pretty good too, but I would have to wait and see where I ended up. After the last rider took off, the DPC decided to play Race Bandit and he hit the trail too. Eventually he caught up to Lunchbox too, but he stayed with him to give him a little push. I ran up the trail a bit and saw them coming in, and I yelled to him that he was almost there. He turned it up and crossed the finish line at lightning speed.


We all headed over to the pavilion for the post race food and awards ceremony. As we waited for the final results, I gazed over at the trophies for the event. They were pretty cool: 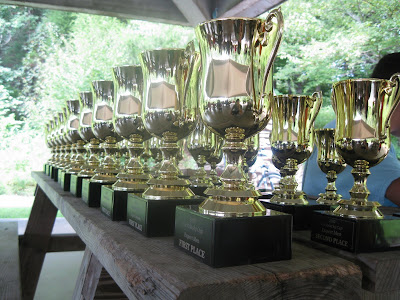 Lunchbox was happy with the effort he put forth, so he was a little more relaxed now: 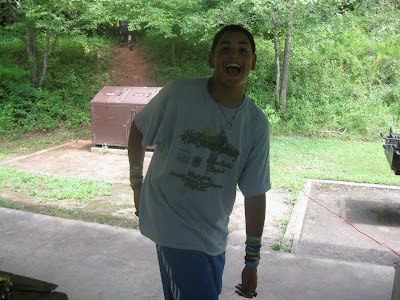 When it was all said and done, I ended up with a kind of respectable 5th place finish. I was actually only 5 minutes out of first place, which means I should have pushed a little bit harder during the first time trial. I was happy though, since I didn’t really take it too seriously. Lunchbox ended up with a 4th place finish, only missing the podium by two minutes. He was a little disappointed, but I told him I was still proud. Now that he’s come so close to making the podium, I think he might be a little hungrier now. That’s good, since I think that means he might actually work on his racing skills. I’m sure it won’t be long until he brings home some race hardware.


I would consider the race a success. As always, the event was run flawlessly, since it was run by the good folks at Charlotte Sports Cycling and First Flight Bicycles. My bike didn’t fall apart this time either, and I also managed to keep the air in my tires. That is a victory for me right there. It looks like the search for a new mechanic here at B-43 might have motivated the current one to do his job properly.
Posted by TheMutt at 9:47 AM