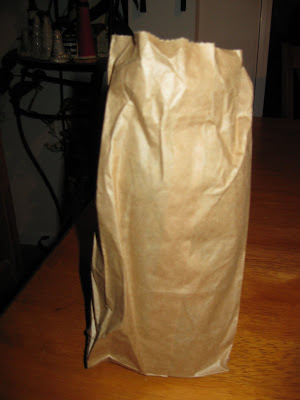 What’s in the bag? Well, since I haven’t been able to ride as much as I’d like to lately, I decided that I would try something different. If you’ve been around here for a while, then you might know that I like beer. Well, not just any beer, but good beer. I don’t drink the cheap stuff, which keeps me from getting hammered every time I wanna pop open a few cold ones. Some might say that I’m sort of a beer snob, and I’m okay with that. I’ve been thinking lately that I would try something different, and hopefully justify the fact that I usually spend good money for good beer.


I don’t drink the cheap stuff, even if someone else is buying. I would rather not drink a beer than drink something shitty, especially one that comes in a can. In a vain attempt to see how the other half lives, I bought the crappiest beer I could find for a taste test (to see if I was even capable of drinking horrible beer.) I opened the bag and took out its contents: 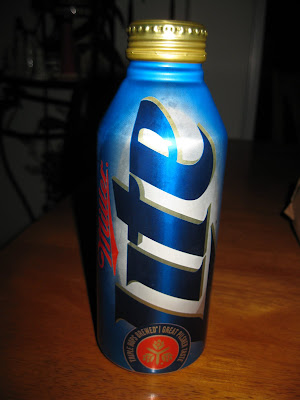 Yeah, that’s a Miller Lite. All I needed was a NASCRAP t-shirt and I would be all set. Most of the good beer I drink is of the hoppy variety, so I figured that the “triple hops brewed” contents of that aluminum can would be tolerable. Yeah I know, it's shaped like a bottle, but it's still just a can. I poured the beer in my favorite Cane Creek pint glass, and took a look. 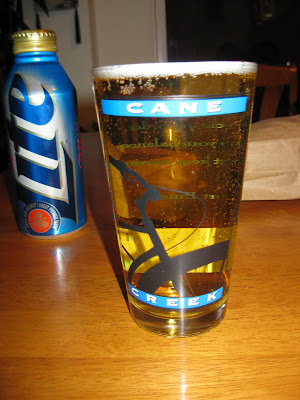 Well, at least it looked like beer. I don’t even drink good beer without a glass, so there was no way in hell that I would drink this concoction straight out of the can. I know, this in an experiment, but I have to draw the line somewhere. Anyway, I put my nose up to the glass to take a sniff, and I was uh, underwhelmed. Instead of smelling like hoppy goodness, it smelled like a stale bar (now I know where that smell comes from at least.) There was absolutely no sign of hops at all, but I continued the test (for blogging’s sake.)

I took put the glass up to my lips and took a small sip. The taste resembled beer, but that’s where the comparison stops. I took another larger sip, and I was utterly disgusted. “Who the hell drinks this shit?” I said out loud. Since I was talking to myself, I got no response. I took another gulp, hoping that it would get better. It didn’t. That shit tasted like stale, slightly beer-flavored water, and I was not pleased. The only thing left to do was this: 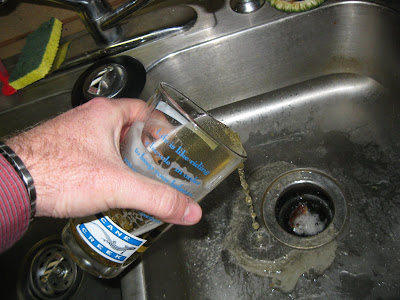 Yuck. I am usually not one to pour out beer, but this was an exception. I thought for a moment how I would get that awful taste out of my mouth. For a second I considered running over to the liquor shelf and chugging a bottle of Jack Daniel’s, but I didn’t want to make myself sick. Back when I was in my 20’s I would drink anything that had alcohol in it just to get tore up. Now that I drink for pleasure, I had to be civilized about it. I grabbed the best beer I had in the fridge: 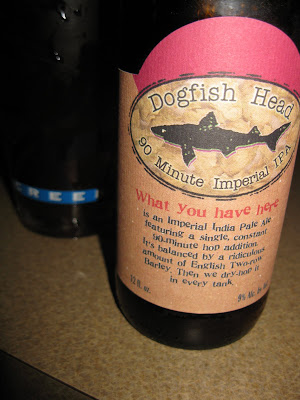 Yeah, that’s better. A little Dogfish Head 90 Minute India Pale Ale. More hops than you could shake a stick at, especially if one were so inclined to shake sticks at beer. I could no longer taste the crap that was in that shitty aluminum can, and I was happy. Lesson learned.

Being somewhat of a beer snob can be difficult sometimes, but it’s well worth it. I thought that by drinking some mass-marketed beer substitute that I would have more appreciation for the finer beers in life, but it turns out that I didn’t need to do that. I’ll stick to what I like, and save the crappy stuff for the uninformed consumer.

What, an entire blog post about beer? Yup. No bicycle stuff today? Nope. Will I be back tomorrow with some bicycle crap and nonsense? Well, I’ll answer that question with another question:

Does a bear shit in the woods? 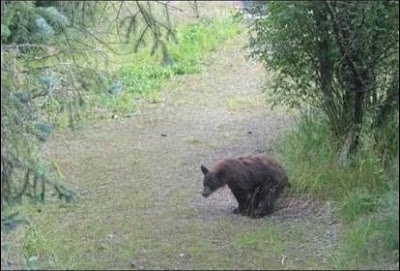 Email ThisBlogThis!Share to TwitterShare to FacebookShare to Pinterest
Labels: and more beer, beer

Should have gotten the 24 oz PBR.

Yuck. I said I didn't want to throw up. I know you love that shit though.

That bear, by friend, is shitting in the clearing, not in the woods...how is that for your bike post? MORE BEER. Cruise over to my blog, which is mostly about good food, with some good beers thrown in. This does make me want to do a taste test of my own...maybe some of the 4th installment of the Sierra Nevada 30th aniv. series for tonight.

Close enough to the woods. I don't see any porta-potties nearby.