Lunchbox and I had the day off last Friday, and I told y’all that we were heading up to Bent Creek for a little fall riding. Little did I know that the word “fall” would end up with a different meaning to me. Anyway, since we were passing by one of my favorite businesses along the way, we decided to stop in and say hi: 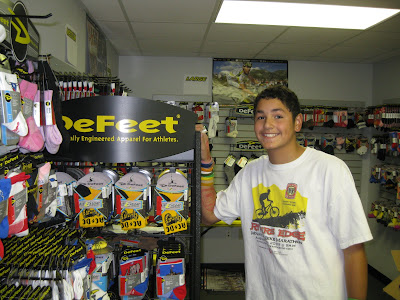 Yep, that’s Lunchbox posing in front of a display at DeFeet International. We were hoping to pay a visit to some of our friends there, but we didn’t see anyone we knew. All was not lost though, since we still ended up with some pretty cool socks. After a short visit, we kept traveling westbound on Interstate 40, headed towards Asheville, North Carolina. We stopped in for a visit at the Carolina Fatz Bike Shop, since I needed a map of Bent Creek and a few extra tubes. The folks there were very friendly and helpful, so next time you head out that way to ride make sure you stop in to pay them a visit.


A few minutes later we arrived at the trailhead. After unloading our bikes and getting dressed, it was time to ride. It was a little chilly outside (around 45 degrees or so), so we hoped that the long climb to the top would warm us up a little. On the way up on the fire road climb, Lunchbox wanted to pose in front of this cool dude for a photograph: 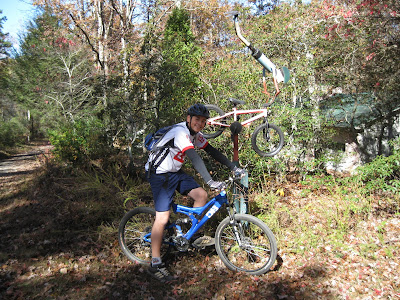 After that, it was more climbing. It wasn’t a bad climb, and Lunchbox was looking forward to getting to the top so we could bomb the downhill stuff. He did a great job on the climb, and seemed to be having fun: 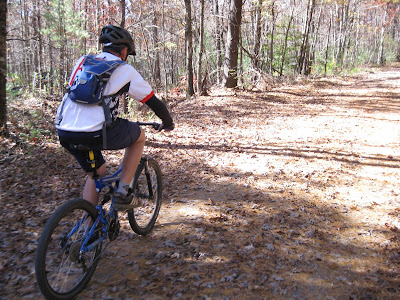 A short while later, we started to see some of the cool fall colors we were hoping for: 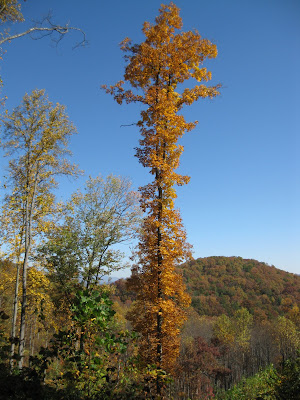 Lunchbox was happy to be so high up on the mountain, but the climb had tired him a little: 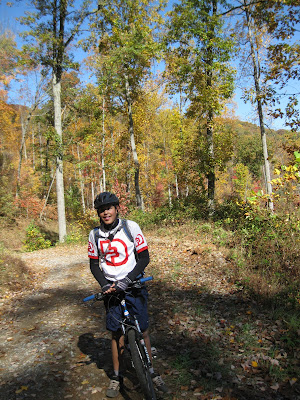 It was all worth it when we saw the sights all around us: 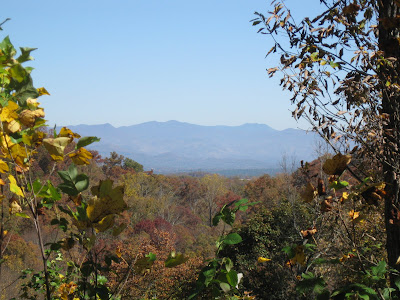 We climbed a little more (on some singletrack this time), and made it to another clearing with a cool view: 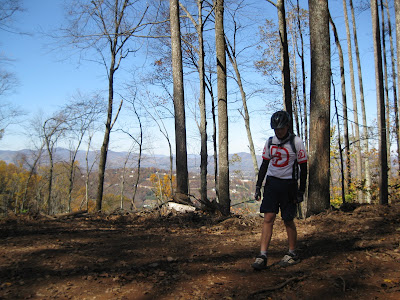 It was then time to head downhill on one of my favorite trails out there, Ingles Field Gap: 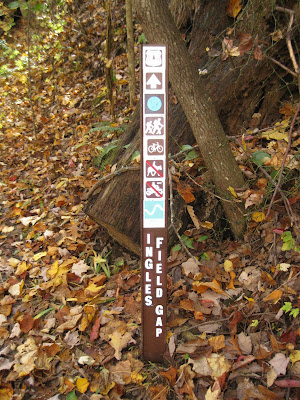 I ran my shitty video camera, but I haven’t had a chance to go through the footage yet. I can tell you that it was super fun though, and we were flying down the trail. I looked down at my speedometer every once in a while, and noticed that I was hitting speeds of nearly 30 miles per hour. The trail was covered in leaves though (it is fall, you know), and that made it tough to stay on it around the tight, twisty singletrack. I took all of the jumps and berms at full speed though, with little regard for my own safety. It was well worth it, and Lunchbox agreed: 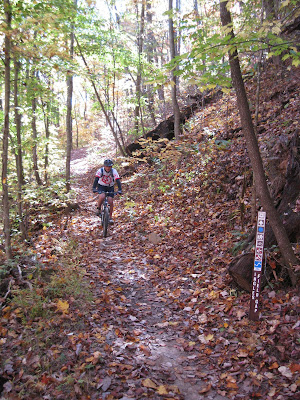 We rode back up the fireroad for a bit, and caught another singletrack section, Wolf Branch. This trail was fun too. It wasn’t covered with as many leaves, so it was easier to go fast. The trail leads back to the parking lot, and I was going a lot faster than I should have. After some more fun downhill, the trail leveled off a bit. This is the part where things went bad.


As we got a little closer to the parking lot, I started picking up speed. I passed over a small rock garden that leads into a small bridge, and I lost control on a pile of leaves. My rear wheel slid out towards the end of the bridge, and it got caught on the edge. My bike quickly swerved the other way, and threw me towards the ground. I remember hitting the ground on my right side, with my elbow tucked into my ribcage. I heard a loud crunch, and then everything went dark. I thought I hopped right up, but Lunchbox said I was on the ground for a minute or so.


I guess I was out, but I did get back up after a few minutes. I could hardly breathe, and my leg was covered in blood. I took off my helmet and noticed that it was scratched on the right side, which would probably explain why I was out for a moment. Those stupid leaves (brown ice as they call it out there during fall) caused my crash, and now I wondered how bad I was hurt. After walking around for a few minutes, I found my bike on the ground with a flat tire. I guess the edge of the bridge had caused my tire to loose its air, so now I had a dilemma.


I asked Lunchbox if he wanted to walk out the rest of the way, and he said it was up to me. I was in a shitload of pain, but I felt like I would be okay to get back to my truck. I decided that I would change my tube so I could at least try to ride it out, and then I would be able to fully asses my injury. Always the quick thinker (and great photographer), Lunchbox grabbed the camera and took a picture of me while I changed my flat: 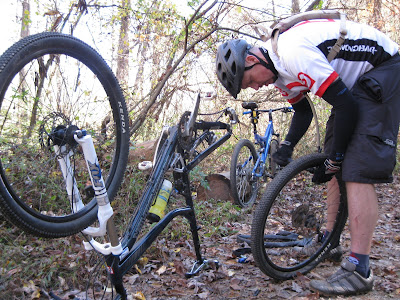 He could have helped change the tube, but his job around here is to take photographs. He offered his assistance, but I kept playing the tough dad and told him I would be okay. After getting my tube in the tire and airing it up, we slowly rode back to the parking lot. I was hurting a lot more by then, so he helped my load the bikes back on the truck for our 2 ½ hour drive home: 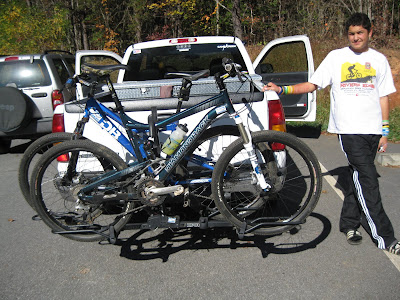 I poked around my ribcage for a minute, and felt the crack. One broken rib was all I found. Not snapped all the way through, but damaged enough that I could feel it. It hurt to take deep breaths and it hurt to sneeze, laugh, and cough (still does.) I also got a nice scrape on my knee: 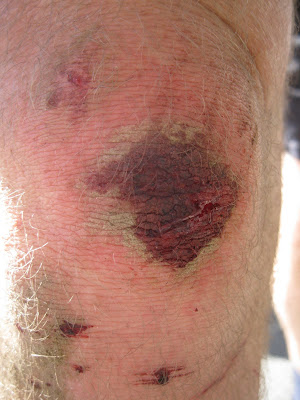 My helmet was scratched up, but my head was okay. I wasn’t dizzy or anything either. I had a nice bruise on my hip, and my shoulder has one too. Since I was almost certain that a trip to the emergency room would be a waste of time (they can’t really do anything for a broken rib), I decided that we would get something to eat before we drove back to Charlotte. We stopped by our favorite local spot, Papas & Beer, for a nice Mexican dinner (and 16 ounces of “medicine.”) We got home that evening, and the fun was just beginning.


Little Miss Sunshine (being a former medic) checked me out and decided that I shouldn’t drink anymore beer. She was worried that my injuries were far worse than I could see, and that I might not wake up the next day. Shit. I wasn’t worried about the not waking up part though. Instead, I was more concerned that I was supposed to ride with my friends at the Kerr Scott Trail System the next morning. I got The Big O ready that night, and hoped that I would be able to ride when I woke up, if I woke up at all.
Posted by TheMutt at 8:56 AM