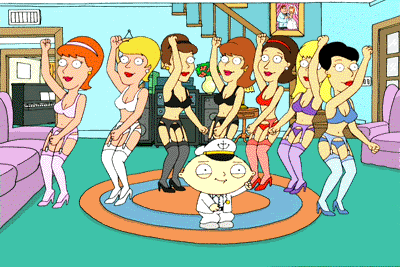 On Saturday it was time to party. Our local mountain bike clubs, the Tarheel Trailblazers and the Dirt Divas held their year-end party at Anne Springs Close Greenway down in Fort Mill, South Carolina. The party is a way for all of us locals to get together every year for riding, socializing, good food, and beer, and this year was no exception.


The party started at 2:00 p.m., so we left the B-43 compound with plenty of time to spare (at least I thought so.) After a couple of stops along the way, we came screeching in the parking lot right at 2:00. We hopped out of my truck and started getting ready, since everyone was preparing to break off into groups and ride the trails. It took me a bit longer to get ready than I would have liked, since everyone I knew came over to say hello and inquire about my rib injury. As I finished getting ready, I saw that everyone else was preparing to leave: 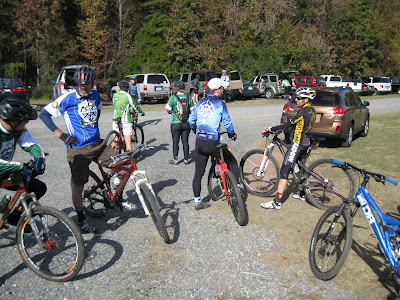 In the photo above you might notice local celebrity Rich Dillen perched atop his brand spanking new squishy geared bike. I had no idea that we would have famous people at the event. Awesome.


Anyway, there were a couple of guided tour groups based on skill level, and some other folks broke off into their own speedy groups. As much as I wanted to join one of the fast groups to see how quick I could fall off the pack, I decided that I would join the slowest group. My rib is still hurt, and I didn’t need to bust my ass (and another rib) out there trying to keep up with the cool kids. Little Miss Sunshine, Lunchbox, and The Dirty Party Cycle rode along with this group as well.


We took off at a nice social pace, and my rib felt pretty good (I touched it several times to be sure.) We stopped every so often to let the group catch up, and I was enjoying this slow, easy ride. I didn’t want to risk further injury by taking photos while I rode, so I only busted out the camera when we stopped for a break. Here’s a “rest stop”: 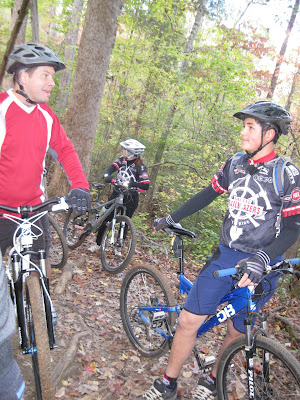 The Dirty Party Cycle is telling Lunchbox about his new found love of big wheels.


We rode with the group for a while, and then we all stopped to cross a bridge. Since this was a beginner/slower group ride, we made sure everyone made it across. At this point Lunchbox, The Dirty Party Cycle, and I let the group go on, as we had to heed the call of nature. We let our bikes get a rest while we ventured off the beaten path: 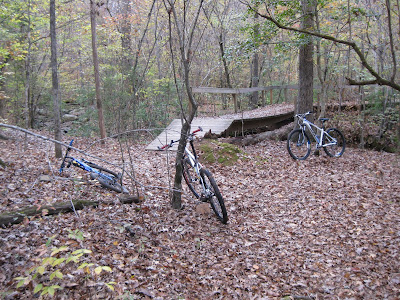 We eventually caught back up to the group, but they were skipping one of the more advanced sections out there. Our little group within the group decided that we would permanently split from the main pack and go off on our own. We rode at a much faster pace now, since I was feeling pretty good. We had to stop at one point because Lunchbox was complaining of shifting issues though. After a short inspection, I saw that his front derailleur cable had snapped, causing his chain to remain in the granny gear. We tried to adjust the front derailleur to put the chain back on the middle ring, but it wasn’t working. We decided that we would slow down a bit and I would fix it when we got back home.


A little while later, I had an idea. At the top of a climb I decided that I would remove the quick link from Lunchbox’s chain, and place the chain on the middle chainring. This way the big ring and the front derailleur would keep it in place, allowing him a better gear ratio to continue the ride. Just when I thought I had solved the world’s problems,. I saw him coming up the hill and I noticed that something wasn’t right: 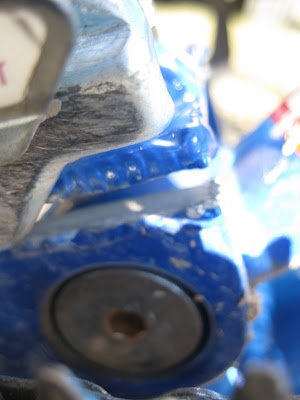 His bike was bouncing all over the place, and it wasn’t because of his suspension. His frame had cracked right at the pivot point on the rear triangle. Great, now Lunchbox was a frame killer too. I guess I’ll be ringing up the folks at Diamondback this afternoon to inquire about the warranty. They should take care of us, but I have a backup plan if they come up with some bullshit reason to keep us from getting a shiny new frame. Although he’s been wishing for a big-wheeled bike, this wasn’t the way he wanted to go about it. He finished the ride, but his spirit was broken.


We finally made it back from the ride, and Lunchbox was happy to get off the trail. He was heartbroken, but he will be riding again soon. As for me, I didn’t re injure myself, so I felt like I had to ride a little more. Rather than leave Lunchbox with his broken bike, I busted out my one-wheeled machine for a little play time. 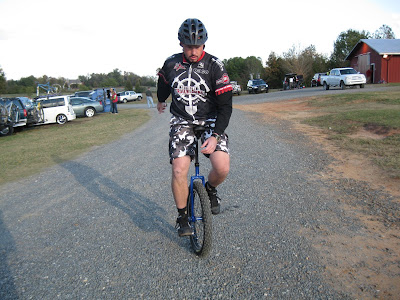 This tuned out to be a very bad idea. I had forgotten the Muni’s tendency to violently throw me from it’s seat at any given time, and I took a small spill. My ribs didn’t sustain any further abuse, but I busted open an old wound: 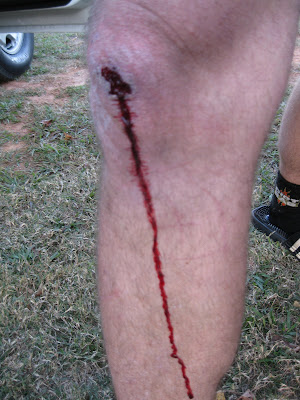 I guess I’ve learned that I can ride the bike again (albeit carefully), but the Muni needs to stay in the garage for a while. I do the dumbest shit sometimes, but it’s usually for your entertainment. You’re welcome.


The party kicked off shortly thereafter. There was plenty of good beer, food, and even a raffle. I didn’t win shit, but Little Miss Sunshine made out like a bandit. We stayed until the sun went down, as you can clearly see in this photo: 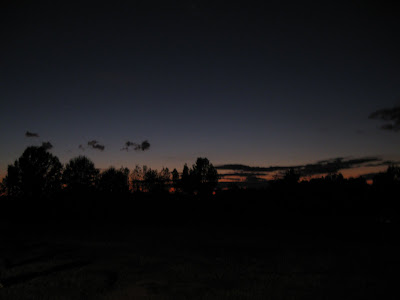 I’ll be back tomorrow with more crap, and maybe even some news about Lunchbox’s bike.
Posted by TheMutt at 8:40 AM