I’ll Take Care Of It Myself 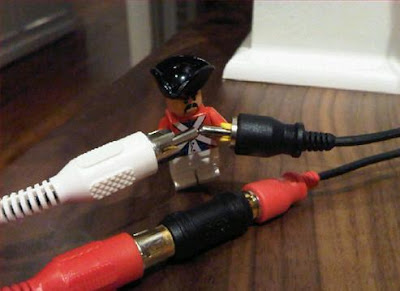 Remember when I told you that I took Lunchbox's bike to the shop to get it replaced under warranty? Well, there’s more to the story. I guess I should start from the beginning. I took his bike to a different shop because it was close to my work, but in retrospect I should have taken it to Ride-A-Bike Bicycle Shoppe, where I got the warranty work done on my own bike. I thought it would be okay, but I have since learned that I made a mistake.


I won’t call out the shop here on my blog (at least directly), but you can find it by clicking here. This particular location is where my problem lies, so I won’t bash the whole organization (although they should pay closer attention to their individual locations.) Why did I take it to a different shop when I had such good service at Ride-A-Bike? Aside from it being closer to my work, I guess it’s because I thought they would take care of me. I’ve been in there quite a bit over the years, but I mostly used them to browse for deals on basics and consumables, and sometimes they had some good sale prices. I like to think that I support all of the shops here in Charlotte about the same, but in this case I was a little limited when it came to authorized Diamondback dealers.


When I originally called Diamondback, they said it would be okay if I took it to any authorized dealer. I didn’t mention before what happened when I first went in the store, but I guess now I should. I brought the broken bike into the shop and stated that I had a warranty claim. When I told the guy that greeted me this he said, “What do you want me to do?” I sensed a little attitude in his voice, but I shrugged it off since I had been in there several times. I figured that they were just messing around with me. They called me a little while later and said that they talked to Diamondback, and that they would send out a new rear triangle to replace the broken one. I was happy, and so was Lunchbox when I told him. I know I already mentioned that part, but after that things started getting strange.


After well over a week, I hadn’t heard anything. I called the shop last Friday and asked what was going on. The guy I spoke with said that he thought that they were sending out the new part, and he said he would call Diamondback right away. After about 30 minutes I got a return call. The guy said that Diamondback didn’t stock the part I needed, but they would gladly offer me a discount on a replacement frame. He gave me a quote of $165 for the frame and $100 for labor to change everything over (that’s what I paid at Ride-A-Bike.) I told him that would be fine with me, and to go ahead and get it going. I couldn’t wait to tell Lunchbox that he would be riding his (new) bike again soon.


A little while later I got another call from the shop. A different guy (maybe a manager?) said that they quoted the price incorrectly for the “warranty replacement.” He then told me that the cost would be $230 for the frame and $200 for labor. Really? All of a sudden it’s double the labor to swap parts to a new frame? The guy also told me the shock isn’t compatible. Bullshit. It is the same size shock (I’ve researched this bike in the past.) They basically sounded like they wanted me to either give up and go elsewhere, or get suckered into getting ripped off. The guy then suggested that I take the bike to a local sporting goods store, and that they should give me in store credit for the bike so I could buy a new one. I was pretty pissed at this point.


I called Diamondback, and they said that dealers basically buy the parts from them and can mark them up for a profit. This must be what happened. They probably thought that they initially quoted me too little, so they changed it. This didn’t explain them doubling the labor charge though. I told them I wanted to see who was jerking me around, and to make sure I should stay loyal to Diamondback. I spoke to the National Accounts Manager at Diamondback, and I was reassured that they were being fair. I thought that the shop was blowing me off or trying to hustle me for ridiculous labor charges though. I asked Diamondback if I could get a new frame directly from them, but they said that I had to go through a shop. That was understandable. I then asked if I could take the bike to another shop to obtain warranty service, and they said I could. I decided that I would retrieve the bike from the clutches of this not-so local bike shop and go from there.


I hurried down after work to pick up the bike, and as soon as I walked in they joked that, “The “local sporting goods store” is waiting for you.” I was pissed but I said nothing. I thought that I had a bit of a relationship with them since I went in there on occasion to buy stuff. They knew me from going in there so much, but that didn’t seem to stop them from trying to give me the shaft. I’ll stick with Diamondback, but I will no longer give my money to this "shop". I buy stuff from shops all over the area, and it’s mostly a matter of convenience. I know most of the shop owners in town, and I enjoy the feel of a “true” local bike shop. Lesson learned I guess.


Now I had a decision to make. I asked Lunchbox what he wanted to do. I actually have the same Diamondback frame (in a different size and color though) hanging around unused in the shop, and I told him he had a choice. We could try this again at a different shop, use the rear triangle of my old frame, or build up his bike with my entire frame. He picked the last one, especially since it’s a larger size. He also told me that since he wanted a 29er, he probably wouldn’t want to ride his squishy bike much anyway. I’ll get him a 29er soon, but in the meantime I had some bike building to do. 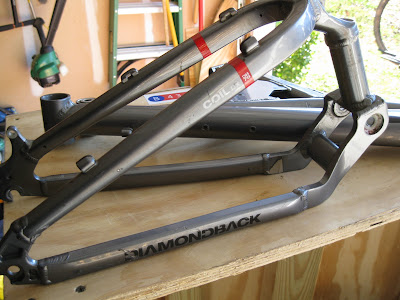 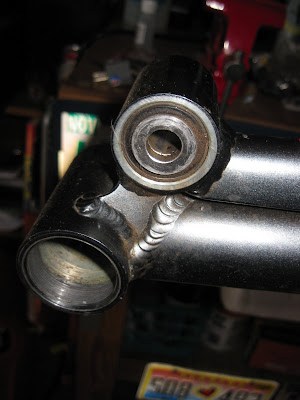 These two halves of the bicycle had to be put together, and then I could start building his “new” bike. I also had to install the Cane Creek headset. 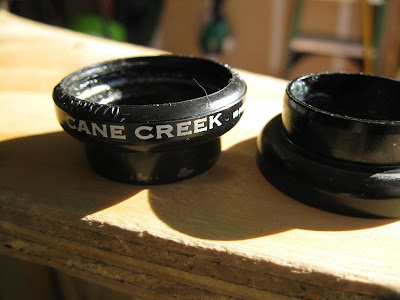 This would be a bit of a challenge without the right tools though. I needed a headset press, but I didn’t want to shell out big bucks for something I wouldn’t use very often. After doing a little research on The Internets, I went out and bought the hardware to make this: 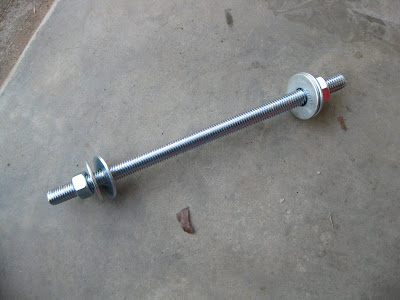 After applying a little grease to the headset cups, I lined them up and got ready to press them in: 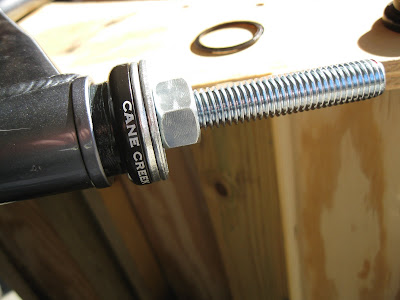 Using two adjustable wrenches, I carefully pressed the headset into the headtube on the frame: 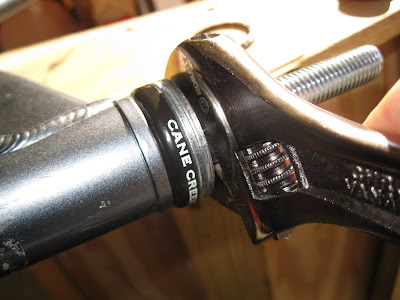 Success! I spent less than 5 bucks for this “tool”, and it did the job perfectly. I installed the rear shock and seatpost, and I was ready for final assembly: 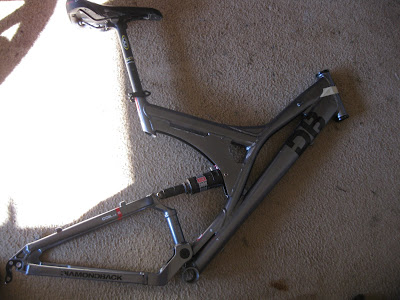 When I started the build I cracked open a beer (as usual.) However, I got so into this build that I didn’t take a drink of it other than the initial sip. That’s odd for me, but I did get the bike built in record time. Also, I saved myself $200 bucks, and probably did a much better job than the “unmentioned” shop would have done. I’m not so bad at this bike mechanic thing, you know. Here is the finished product: 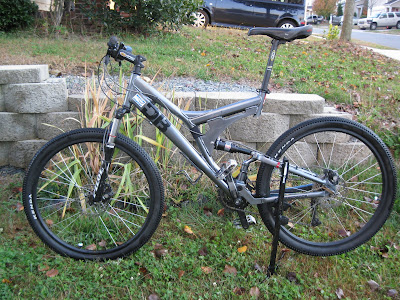 I rode this frame (built up nearly the same in fact) for a couple of years, and it served me well. Lunchbox was happy to be riding his own bike again, but we both know that this is temporary until he gets on big wheels. I can’t wait to see him out there tearing up the singletrack on his very own 29er, but this bike will do for now.


I will never visit that shop I mentioned again, but I am still 100 percent behind Diamondback. They stood up to their end of the deal, and I will keep riding their bikes. We have a ton of love for the fine folks at Diamondback Bicycles, and I won’t let my experience with one shop change that. I don’t mean to rant here today, but I wanted to share my experience. I’ll be back tomorrow with an actual ride report, and maybe some new product testing. Thanks for playing.
Posted by TheMutt at 8:31 AM

Wow. That experience has ME pissed at the shop. It really sucks when businesses don't respect you or appreciate your $$.

Dang, Chris! You would think even a big chain would have a little better customer service. Sorry that happened.

Yeah, it does suck, but that's why I wanted to share it. I didn't want to throw them under the bus or anything, but I have so many readers here that I just had to let people know.

Thanks. Your shop is on the good list, for sure. I do most of my own stuff, but if I need "professional help" I wouldn't hesitate to pay you a visit. By the way, I thought for sure you would give me shit about my homemade headset press. Maybe I should have used a hammer and a block of wood.

Those guys are a bunch of douchebags. The sale prices in there aren't worth the hassle of trying to deal with their attitudes. Most of those guys wouldn't make it in a real bike shop anyway. I stopped going in the Charlotte store a year ago for similar reasons as yours.

They blew me off a couple of times too. They are the Walmart of bike shops. They will hire anyone that has a pulse. I wont step foot in that store ever again.

Performance isn't so bad. They have some good things in there at great prices. You really need to be an educated consumer though. The people that work there are tools...with attitudes. They act like their crap doesn't stink. If their prices weren't so cheap, I would never go there.