We All Did It 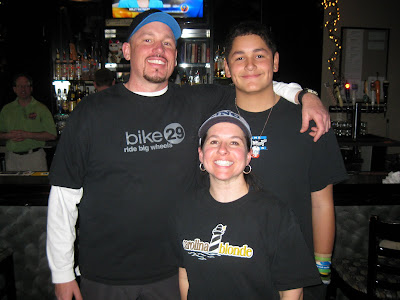 Wait, this was from the afterparty.


I guess I should start from the beginning. On one of the most gorgeous day of the winter so far, the whole Charlotte crew here at B-43 got out to race in the Winter Series. Well, except for the Dirty Party Cycle, who was getting his ride on at an undisclosed location. Anyway, the day started with me getting to play first responder, as one of the riders in the beginner class had taken a nasty spill on one of the jumps out there. It was time to use my Bike Patroller skills.


As Little Miss Sunshine got ready to race, I got word that a racer had done down, and someone said he was unconscious. I rushed out onto the singletrack with my medic bag, and tended to the wounded cyclist. He had slammed hard on his head, but when I got there he seemed to have his wits about him. We walked him out of the trail to the awaiting professional medical aid, which checked him out further. He decided that he was well enough not to accept a ride from them to the hospital, but later I learned that he didn’t remember the crash, or the walk out of the woods up to the start/finish line. He would end up being okay, minus some cuts on his face and a dented helmet.


Anyway, Little Miss Sunshine started racing while this was going on, and I managed to get out there while she was hitting the singletrack. She was enjoying every bit of this spring-like day. 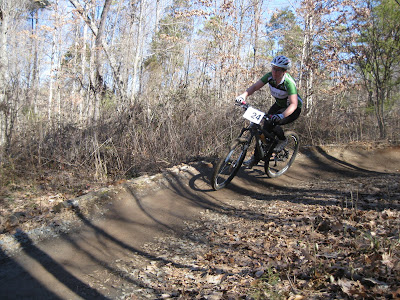 As the race went on, she was doing well. I tried to get photos from all over the trail, but my late start gave me few options. Here’s another shot of her on the approach to the start/finish line. 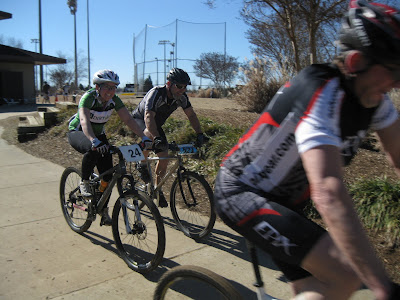 And just like that, she was done. Even though she had to race against some professional roadie women out there, she fared well. I think she ended up in 5th place, and she was pretty happy. That was just the beginning, as the next rider up would be the only junior member of B-43. 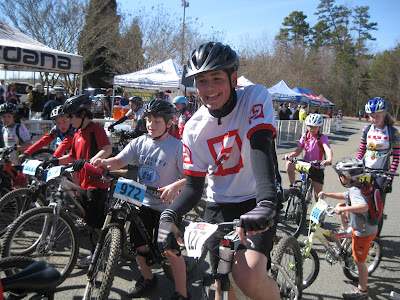 Yep, Lunchbox made his season debut, and this event would mark the first time his new 29er would see the race course competitively. When the signal was given, his nerves were brushed aside and he took off as fast as he could. 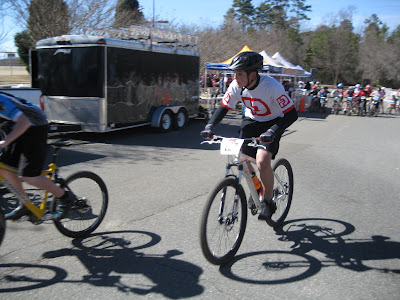 Even though he is new to the whole 29er movement (and clipless pedals), he handled the first lap like a champ. I rode up to the sidewalk area, and caught him speeding down to the start/finish line. 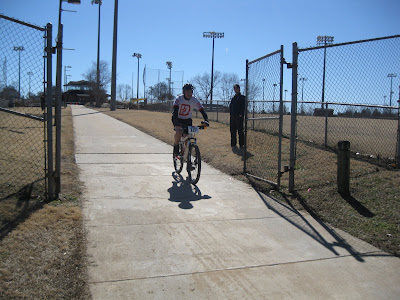 I decided that since he always gets out on the trail to capture photos of me racing, he deserved to see some photos of himself rocking the singletrack. He was pushing his big wheels as fast as he could, and putting on a good “tough guy” face for the camera. 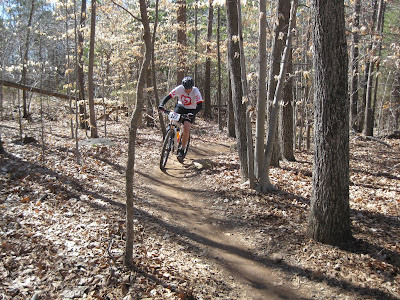 I hurried to the rock garden, hoping to catch him on the same lap (I cut through the fire road to beat him there.) This photo is blurry, but that was probably because he was going so fast. 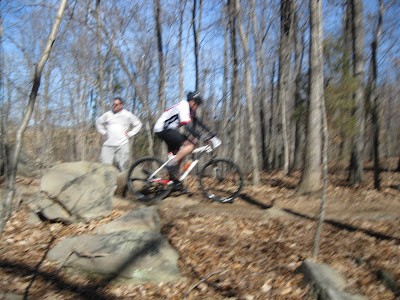 I rushed back into the singletrack, and this time he was so tired that he didn’t bother to put on a “racing face.” It didn’t matter though, because he was giving it all he had. 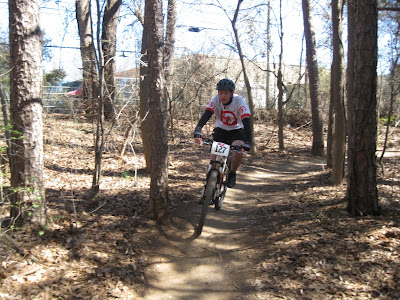 Maybe it was because he didn’t properly warm up, but that lap really did a number on him. He recovered quickly though, and pushed it through the berms to stay competitive. 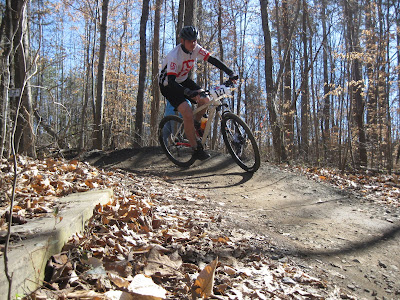 Again, I cut the trail to catch him on the same lap, and caught him climbing the fire road towards the final downhill section to the start/finish line. 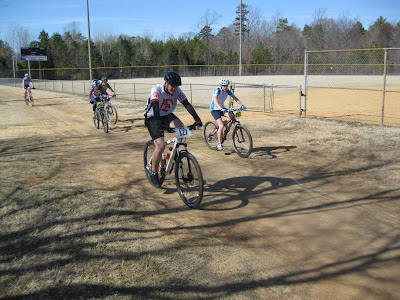 After that, it was one lap to go. I cheered him on, and took my place at the finish line to celebrate his first race finish of the season. He was so happy to finally be finished with this race, as you can plainly see in this photo. 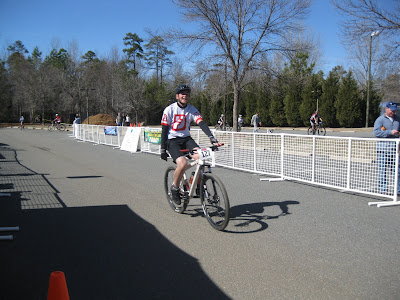 Yes, there are lots of photos here. That’s partly because I took quite a few, and also because I am too lazy to use the English language to describe everything that happened out there. Since today’s post was so long (and full of entertaining photos), I’ll cut it off here and come back tomorrow with my own race report. I can’t promise that there will be as many photos (since I was racing and could photograph myself), but maybe I’ll make it slightly entertaining. See y’all tomorrow. Same bat time, same bat channel.
Posted by TheMutt at 8:21 AM