Not much, really.  After riding bikes pretty much all day on Friday, I thought I would continue the trend for Saturday and Sunday.  That didn’t really happen.

One thing got in the way: 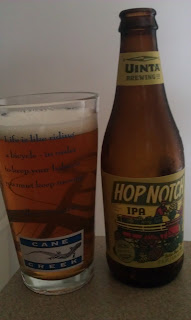 This is an IPA that I recently discovered, and it was pretty delightful.  Hop Notch IPA from Uinta Brewing, is pretty dang spectacular.  In fact, it’s one of the better IPA’s I’ve tried.  That’s saying a lot too, since you all probably know I’m a full-on hop head.

On Saturday, I got to sleep in for the first time in who knows how long.  I didn’t have to get up for a race, group ride, or work, so I took the opportunity to sleep in for a little bit.  I didn’t really make it much past 8 a.m. though, so I found something to pass the time.

No, I didn’t have beer for breakfast.

I cleaned up the house a little bit, then grabbed Darth-O (my geared bike), and took it up to the The Cycle Path to have the seals on the Fox fork replaced.  I was hoping to just buy the seals and take care of it in the shop while I was there, but I ended up just hanging around and shooting the shit…for hours. 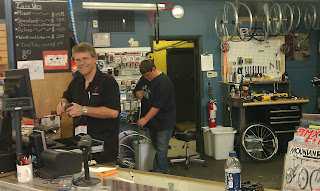 Look at Mark pretending to be busy.

I actually helped out a little around the shop, but never ended up getting to my own bike.  I left it there, and Mark said he will get to it soon.  In the meantime, I “borrowed” a bike for some top secret testing. 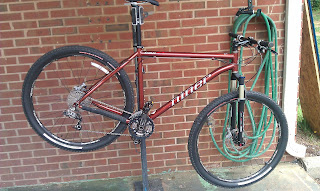 Yeah, I’m gonna give this Niner a try for a little bit.  Even though the geometry is really close to what I currently ride, the slightly smaller frame size always made me think that it would be too small for me.  I found out differently when I test rode a Niner down in Georgia, and I’ve been itching to try one again.

Unfortunately, the rain started coming down on the way back from the shop, so I didn’t get a ride in.  Sunday, it rained some more.  I didn’t really have time to ride anyway, since the family and I had to take a trip up the road to see my Mom on her special day.  We went out to dinner and hung out at her house, so I didn’t get any time on the borrowed bike.  The rain continued yesterday, but I did get a chance to ride it on my own little "private" trail last night.

I can’t keep it forever since it’s a demo bike (and I’ll have to go pick up mine anyway), but I’m hoping to get in a little more trail time soon, even if it’s only another short ride.

I like to change things up a bit every once in a while, even though I really hate change.