With two races to go in the Southern Classic Series, I’m sorta relived that it’s almost over.  I’m still having fun though, so in a weird way I don’t want it to end. Good people, good race venues, and pushing myself to get good results.  It’s been rewarding for sure.

This race almost didn’t happen for me.  I haven’t slept worth a damn in over a week.  I forgot to mention it earlier, but I was in a car accident about a week and a half ago while I was driving at work (in their vehicle.)  I was rear ended while I was at a red light, and while I didn’t think it was too serious at the time I’ve had a sore neck and a headache since it happened.  I finally went to the doctor on Friday, and after a quick visit I walked away with some meds and a note to take plenty of breaks at work and no heavy lifting.  Cycling is okay as long as I “take it easy.”

I’m not sure how to do that during a race.

I arrived early at , shot the shit with some fellow racers, and got myself warmed up. I was as ready as I could be. 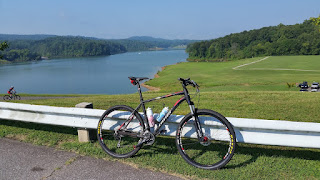 We took off, and as usual I sprinted to the front.  It wasn’t part of any strategy though.  I just wanted to hit the first little rock garden thingy without being behind anyone.  I did, and after that I let one guy get by me.  A short while later, I let another by.  I was taking it easy.  I climbed, descended, and kept the rest of the field behind me as best I could.  I felt okay I guess, but the roots were beating the shit out of me and making my head throb.  I just told myself, “Just hang in there for the final downhill.”

Before I knew it, I was flying down the last section of the course.  I rounded one blind corner and suddenly spotted a racer from a later class climbing UP the downhill.  He jumped out of the way at the last minute, likely sparing himself certain death if my 230 pound ass had hit him.  He was lucky.  I was spooked.

I breezed through the start finish line and hit the climbs again.  I felt stronger this lap, and climbed a lot better because of it. About halfway in though, the muggy air in the woods was starting to get to me and I hit the wall.  I thought for sure I was making good time to catch the leaders, but my pace was slowing.  I felt like shit and wondered if I had enough left to make it out of there.

I hit a short downhill and cooled off a little.  I suddenly felt better and put the hammer back down.  I momentarily forgot about my head hurting and gave it all I had to finish the race.  When I hit the final downhill I let it go again.  This time though, I kept a lookout for rouge climbers going the wrong way.  I made it out without incident and rolled through the finish line in 3rd place.

Good enough for a spot on the box. 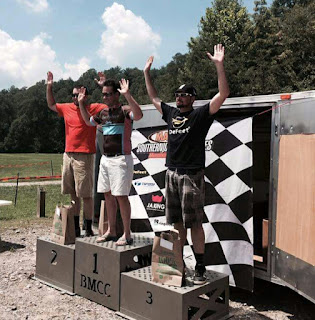 And more importantly, I’m pretty sure I secured my 1st overall in the series with one race to go.  I guess we’ll find out for sure in two weeks.

In the meantime, I spent the rest of the day sitting around enjoying a beer or two to make the pain go away. 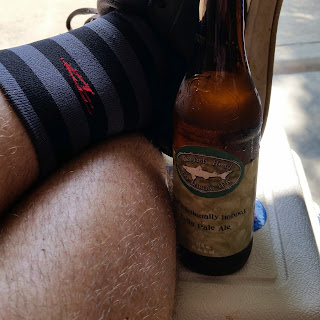 It was a pretty good day.  Racing is fun.  Even if it hurts.