I got some new bike bling da udda day.  While I tried to convince myself I didn’t actually need anything else, my want took over and eventually turned into need.  Got it?

My new Niner has been put to good use out on the race course since I got it.  My justification for getting it was to “have a few extra gears” and I didn’t plan to do anything else to it.  Once I realized how much I enjoyed having the option to ride shifty stuff, I started thinking about upgrades.  As an “entry level” bike, it was a wee bit on the heavy side.  Since I am too at 230 pounds, weight couldn’t be the only factor.  No, it was actually a performance issue…

I got tired of clunky wheel engagement and quiet hubs when I coasted.

So, I spent a little time online looking at prices.  Since I already have two other sets, I knew I wanted IndustryNine hubs.  Online prices were decent, but with no idea who would actually build them I had second thoughts.  Then I remembered that I’m a dumbass and should buy local.  I called up The Cycle Path and told them what I wanted.  They gave me an awesome price, and having had repairs done to my wheels from there in the past (and seeing other wheelsets they’ve built) I knew that I wouldn’t have to worry.

The result?  A set of I9 hubs laced to Stans Arch EX hoops, built to take any kind of abuse that I might throw at it on the race course.

I picked them up last Friday and I was excite.  I hurried home to mount up a set of Maxxis Ikons, and after the easiest tubeless setup evarrrr I was ready to roll. 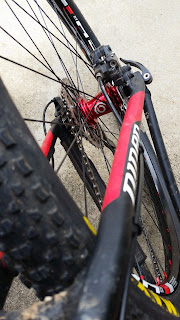 I took a couple of test laps around the neighborhood and that was good enough.  I haven’t ridden them yet since I needed to get back to the single speed thang, but I know that they will be just as awesome as the other sets I own.  I’m sure that the first “real” ride will be at my next race.  That will be a good test which I’m sure it will pass.

Big shout out to Mark at The Cycle Path for building me a set of custom wheels.  I joke with him about building wobbly wheels, but in reality he does it right.  I like spending my money here in NC.  My local shop got everything and built the wheels, and as a bonus the hubs are made just over there in the hills of NC.

Local is rad.  New bike shit is moar rad.
Posted by TheMutt at 8:14 AM