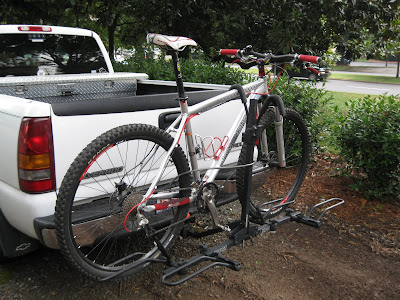 Well, it would appear so at least. I had The Big O strapped to the truck all day at work, and the plan was to head out to Colonel Francis Beatty Park down near Matthews for yet another race in the Summer Series. Mother Nature had different plans though. Around 3:30 p.m. or so, I got word via Twitter from the HMFIC of the race series that the race had been postponed. This was a makeup race from another rainout, so now we are really behind. More importantly though, I needed to get in some mileage in preparation for the XTERRA Whitewater. What would I do?


When I popped out of my hole at work, I noticed that it did indeed rain earlier. On the way home though, I observed that the roads were pretty dry. Whatever rain we might have received in my neighborhood had all but disappeared. Since I was pretty sure that most of our local trails would be closed, I decided to dust off the road machine and get in some kind of pedaling action. I hurried upstairs and changed into my roadie attire (full spandex, yuck) and grabbed the road bike out of the garage. The plan was to take a nice, easy twenty mile loop to uh, maintain my cycling fitness.


Around 6:00 or so, I hit the road. Even though my quads were a little sore from my run the day before, I didn’t feel too bad on the road bike. After about the first two miles, I started to warm up. I attempted to keep a twenty mile per hour average for the entire ride, and I was successful for the most part (traffic lights notwithstanding.) With all of the hype leading up to the 2010 Tour de France, I gave it my best Lance Armstrong effort. The only thing missing was a couple of random drug tests along the route. While I have no full-time roadie aspirations, I was pleasantly reminded that road riding can be fun on occasion. Moderation is the key, I guess.


This won’t get me completely ready for my XTERRA, but I had to do something. Twenty miles on the road last night felt pretty nice, but it was no epic distance by any means. The good news is, there were no near-misses with irate and inconsiderate drivers. That’s the worst part about riding a road bike. At least with mountain biking, I don’t have to worry about anything trying to run me over. The trees tend to stay put on the trail, so if I hit them it would be purely my fault. Maybe, instead of doing all of this “training”, I should just put a motor on my bike. That would be a big help.


Hopefully things will pick up around here, especially so I don’t have to bore you to death with tales of road bicycles and spandex. That just plain sucks, unless I start riding with this group: 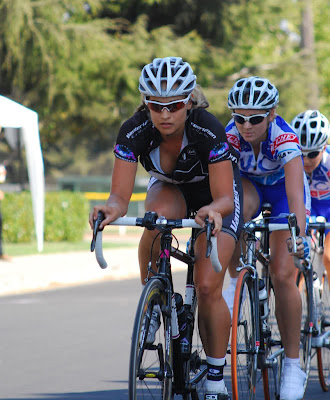