Well folks, it’s over. XTERRA Whitewater is over and done with…and we survived. While we were all certainly ready for this off-road triathlon, I have to say that it was one of the hardest things I have ever done. What? Seriously? Yep, and of course I’ll tell you all about it.


Two of the B-43 team members were stuck in The Sunshine State (Señor Oeste is working for The Man and Lunchbox is on a little vacation), but that didn’t stop the rest of us from meeting up at the U.S. National Whitewater Center at the crack of dark yesterday morning. Little Miss Sunshine and I met up with The Dirty Party Cycle and Mr. Shepherd, and we proceeded to get ready for what was supposed to be a fun race (and it was for the most part.) After we set up our respective transition areas we all posed for the obligatory pre-race photo: 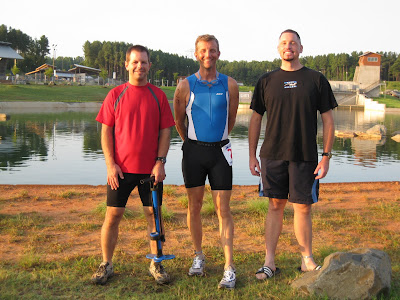 I’d like to tell you all that the nerves started to get to us, but that never really happened. Sure, I was a bit anxious, but that was it. I knew I was ready. I had actually trained for this one, and my bike was in tip-top shape. I was even feeling pretty darn good about running five miles. The only thing that made me feel a little sick was Speedo-Boy: 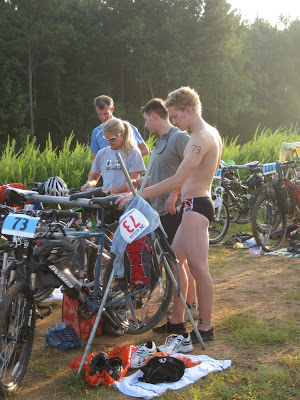 Ewww. I know that guy must have been a swimmer, but damn. He must have either lost a bet with his buddies, or else someone tricked him into thinking he was supposed to wear man-panties for a triathlon. We all hurried away from Speedo-Boy so we wouldn’t catch it (whatever it was.)


While I was putting the finishing touches on my transition spot, I bumped into my XTERRA mentor, Peter. He’s the guy that got me interested in this fine sport, and I was glad to see him. He competes in XTERRA events all over the country (even the World Championships in Hawaii), so when he talks I listen. He had nothing but good words for me today, and that definitely boosted my confidence. 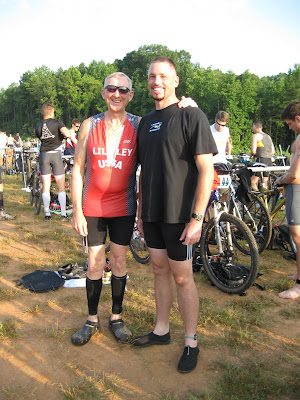 After a bit of a delay, we headed down to the ol’ river to get ready for the first part of the swim. We started the 550 meter swim in two waves. Mr Shepherd and The DPC started in the first, and I started in the second. I watched as my two B-43 teammates headed towards the first buoy, and I still remained fairly calm. After that first group reached the last buoy (about 6 minutes later), my group started. The water was so shallow at first that I just ran through it until it was deep enough to dive in. I was somewhere in the middle of the pack, and I was pretty happy with that. Actually, I was a little conservative on the swim since I got kicked in the crotch last year, but I still mixed it up with the group a little. After a small sighting error on my part after the second buoy, I headed back towards the shore. I felt great, and the biggest part of the race was over.


Here’s a shot of Mr. Shepherd running out of the first swim: 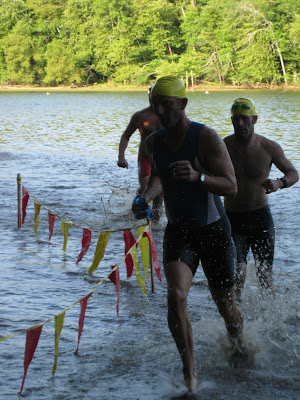 I finished the swim just behind Peter, so we ran the trail together over to the next swim leg. Little Miss Sunshine was also waiting for me, and ran with us a bit too, taking some photos. We crossed over the bridge and headed up the side of the island: 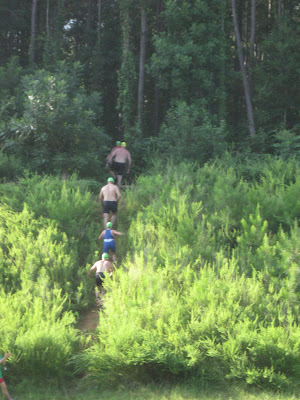 That’s me at the top.


We hopped back in the water, this time for a 200 meter swim. The water was really warm, and I pushed it hard through there. I knew this swim would be easy, so I wasn’t worried at all. As I neared the exit, Little Miss Sunshine was waiting with the camera. That woman was everywhere, and I was glad for it. 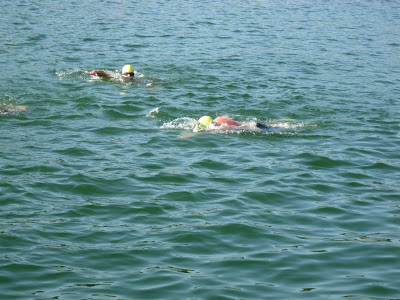 I’m in the center of the photo, and coincidentally there is the DPC on the left. Somehow I caught up to him, but I didn’t realize it until I got out of the water. We both headed over to the transition area and got ready for the best event, the mountain bike. 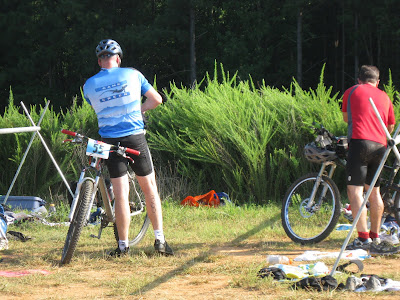 I finished my transition a little quicker that the DPC, so I headed out on the trail. I figured he would be right behind me though, so I wasn’t worried. I thought that we would ride together and crush the mostly-roadie-first-time-on-a-mountain-bike riders on our way to catch Mr. Shepherd. I felt great as I headed towards the trail. 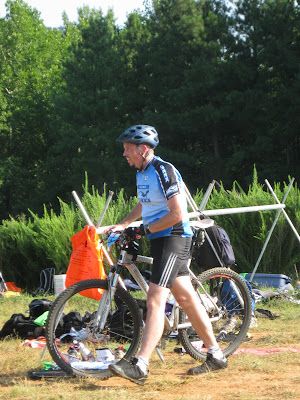 When I got on the trail, I gunned it. I was passing people left and right, ringing my bike bell as I went by. This was my trail, I thought, so I had the advantage here over the out-of-towners. Every time I passed someone, my confidence grew stronger. I knew the DPC was doing the same thing. When I came to the river crossing (where we started the swim), I saw Little Miss Sunshine again with the camera. I had passed about ten people on the trail at that point, so I was feeling good. 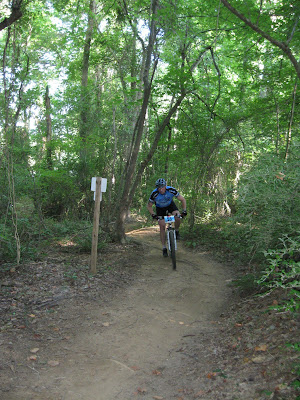 After hearing her cheers, I picked up the pace even more. I passed a few more people on the trail, and then I arrived at the Carpet Trail. This was a lot of climbing, so I dug in and tried to gain some more speed. I passed quite a few more people on the climbs (a rare feat for me indeed), and I headed for the final decent of that trail full of confidence. I bombed the downhill with reckless abandon, but all of a sudden I knew something was wrong. As I reached the bottom of the hill, my rear tire slid out. I looked down and saw that it had gone completely flat. Shit.


I quickly flipped over my bike to see what caused the flat. I didn’t see anything obvious, so I grabbed my co2 and inflator out of my Awesome Strap and tried to get some air in my tire. As quickly as it went in, it came right back out. No worries though, as I had a spare tube and some more inflators. I changed the tube and tried to pump it up, but it was flat too. Shit. I watched as everyone I had passed blew by me…my race slipping away. The DPC went by and asked if I was okay, and I think I mumbled something to him and then cheered him on as he passed by.


One rider actually stopped to help, but he didn’t have a tube. He did have a hand pump though, so I tried something different. I tied my tube in a knot where the hole was, and tried to pump it up. Something kept poking holes in the tube, and I couldn’t figure out what it was. I told the kind man to get out and finish his race, and that I would just run it out. He said, “I hate to tell you this, but it’s about nine miles. Oh yeah, You still have a five mile run after that too.” He was right. Could I really run fourteen miles? Since giving up was not an option, I did the next best thing: I rode my flat tire out of there. Even if it would later cost me a new rear wheel and tire, I would get out of there and finish my race.


Man, that shit was tough. The climbs were really hard, but I made it up Goat Hill and the Gasline climb anyway. The downhill sections were tougher than usual, since I had zero traction on my flat rear tire. I pressed on though, only walking when I slipped off the trail. I was moving along at less than a snail’s pace, but at least I wasn’t running with my bike. People were still passing me, and most of them said, “Oh, that sucks.” I usually replied with, “Well, I have no choice.”


After what seemed like forever, I finally approached the entrance to T2. Some people were already finishing the run at that point, so that discouraged me even further. I could hear the groans from the crowd as they saw me ride by on that stupid flat tire, but they were still cheering me on. I hurried over to change into my running shoes, and then I was off.


There were no photos of the run, but I ran the entire five mile trail at a pretty good pace. My legs were extra tired from riding so far with a flat, but I pressed through the pain. The time passed by pretty quickly, and before I knew it I was headed for the final approach. When I crossed the finish line, I was relieved. 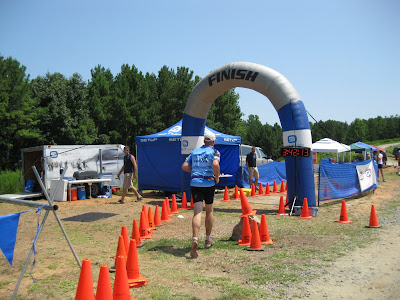 Three hours and forty-two minutes. By my shitty calculations, I must have spent and extra hour and fifteen minutes on the trail riding on that damned flat. I still finished though, so I was happy. The funny thing is, people finished after I did, and they had plenty of air in their tires. Mr. Shepherd, The DPC, and Little Miss Sunshine were all there cheering for me, as well as the rest of the crowd. I felt good for going through what I did, but now I had to worry about fixing The Big O.


Overall, the XTERRA Whitewater was a great event. It ran fairly smooth, especially since this was the first XTERRA that the race promoter has ever done. The only real complaint I heard was the lack of cold beverages at the finish line, which had the DPC going thirsty for a bit. That just sucks. But, other than that, I would call it a success. Even though I had mechanical issues, I still had a decent “race.” Flats and the like are just a part of mountain biking, and XTERRAs are not supposed to be easy. I think I used my mind more that my body that day though. The week ahead will be full of more challenges, so stay tuned to see if I post up anything on a daily basis. I’ll give it my best, but I can’t promise anything. Today’s post is long enough, so you can read it again for tomorrow if I’m not here. Peace out.
Posted by TheMutt at 7:34 AM

Damn that. I'd have posted my first DNF over a flat in that situation fer sure.

BTW- I think that those particular itty-bitty Speedo style garments are generally referred to as 'manties'. At least they are by me...

Fack...must of been one of those damn Vuvuzela thorns!!

Why are Americans afraid to wear speedos?

because most are fatties