Back To The Sunshine State

Unlike “normal” weekends where I have no plan and try to cram in a bunch of stuff, this weekend I actually have a plan. I'm leaving in a few hours for sunny Florida, specifically Jacksonville. I have the privilege of attending the SORBA Board of Directors meeting tomorrow, and I'll be representing the Tarheel Trailblazers down there. Why me? Well, I may have forgotten to mention that I am on the board of our local club here (serving as Vice President.) The bigger news may be that as of January, I'll be part of the presidency. We've opted for a co-president position this time around, so I'll be teaming up with TomTom to run this club into the ground, er, I mean help us grow and become a better club.


Sounds like a challenge. I hope we're up for it.


Anyway, I stand to learn a lot at this meeting tomorrow, but I won't bore you with the details. After the meeting though, we'll be riding. The ride takes place at a trail I rode a few years ago, Hanna Park. While not a difficult trail by any means, it should be fun. Being a native of Florida, I know that it's pretty flat down there (especially near the coast.) That probably means I shouldn't bring the Enduro™ bike. 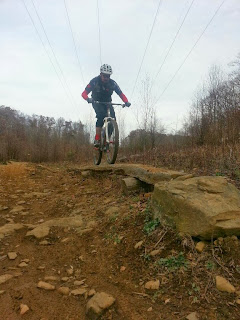 I'll pack my trusty rigid hardtail single speed, and hopefully won't spin like crazy trying to keep up on a group ride. If the ride doesn't last too long and I have time, I may head over to Santos in nearby Ocala for some really fun riding. I'm pretty familiar with that place since I grew up down there, so I know it will be fun. Maybe I'll bring my lights and go for a night ride. That's one thing I've never done down there.


There is a possibility that I could be tired of pedaling from just one group ride, so Hanna Park may be all I get. In that case, I may take a trip over to the longest surviving skatepark in the world, Kona. I haven't been there in years, and quite honestly I've missed skateboarding. Maybe it's time to get rad and all that.


Once again, that's quite a bit of stuff planned for one weekend. Luckily I have Monday off too. That's my birthday, but I may not have the energy to celebrate.


Still taking the day off from here though. See y'all Tuesday.