Too Busy For Bikes

My weekend was shit.  I had some (loosely made) plans that I figured I'd have to change.  Being on call for work is not conducive to making any kind of set in stone ride plans or for doing any other kind of activities that require advance notice.

Still, I complicated things by purchasing an adult puzzle. Since I'm a kayaker now, I've been spending a fair amount of time getting my shit together so I can fully enjoy being on the water.  In addition to that, the little lady will be getting a kayak soon too.  Since my boat is so big I can't carry another one on top of my gas guzzling SUV.  To make things easier I bought a little utility trailer Friday afternoon that I can modify to carry multiple boats.  The only problem was (in addition to having to customize it later) was the fact that it came in those two little boxes pictured above.

I had to put the damn thing together and decipher some pretty bad Chinese-English translations.  To fit everything in those smallish boxes, there were a lot of parts... 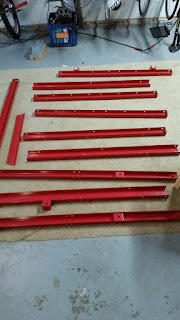 This was just part of one box.

Friday evening I laid out all the parts from both boxes (not all were pictured above), grabbed a frosty beverage, and got to work.  With the fear of getting the call to go to work, I hurried along.  You Tube videos I looked up said that it would take about six hours to assemble completely.

I did it in three.

Two hours in, the little lady came home from work.  We took a dinner break, I sent her off to bed, and went back out to the shop to continue.  One hour later (and one more beer) I was finished with the main part of it.  It was close to midnight, so my plan was to save the lights/wiring for Saturday.  I went upstairs, took a shower, and by about 1:00 a.m. I was out.

I tried to sleep in.  That didn't happen.  Early in the morning my work phone went off while I was still in bed.  I got up, let the dogs out, fed them, then hopped on the computer.  What should have been a simple issue with one of our customers turned into over nine hours of work.  I was on the phone/computer with people all day, and by the time I finished (and resolved the issue) it was too late to work on my trailer lights.  I went out to grab us some dinner, we ate, then I was in bed sorta early.

No bikes, no beers, no trailer work.  I was pissed but hey, it pays the bills.

Sunday was a new day.  I ran out to the garage and started running the wires on the trailer to see if I would need any additional parts/connectors.  Once I determined what I would need, I took off to buy a few items and get some lunch.  While I was on my way back home, the same customer from the day before called again.

Luckily it was a very small issue, and I was able to help get them working in about five minutes (over the phone.)  Back to the house, I ran the rest of the wires for the trailer lights and tested them.

I had a working trailer! 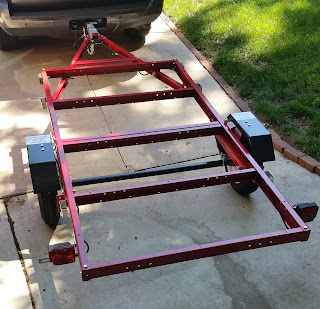 It's 4 feet by 8 feet with 12" wheels.  It will work great for my kayaks once I put a floor on it and build a rack.  That part is easy.  If I hadn't been on call for work, I probably would've had that part done too.  For now though, I'm happy to have a little utility trailer for my kayaks, or anything else that may require a trailer. 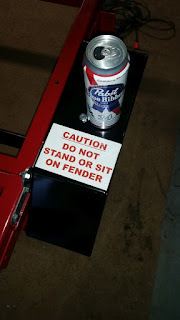 This little trailer was cheap, but it will do the job.  I saved a shitload of money by building it myself but that wasn't the best part.  I really enjoying doing things myself, so spending what amounted to an entire weekend doing this was pretty rewarding.

No bikes for me though.  I'll have to make up for lost time really soon though.

Email ThisBlogThis!Share to TwitterShare to FacebookShare to Pinterest
Labels: do it yourself, kayak, trailer