I'd Forgotten A Few Things


Just as I was starting to feel good about the amount and style of riding I'd been doing over the last few months to get ready for the Cross Florida Individual Time Trial, I got a touch of anxiety again when I realized that I had a little equipment maintenance to do.  You see, after taking a break from riding so much a few years ago I didn't have to do much of that for quite some time.  But since May I've been putting in quite a few miles and my bike (and other stuff) was starting to show signs of wear.

Two out of three of my mountain bikes are single speeds, which means of course that I don't have to worry about adjusting stupid gears and all that.  However, my geared bike is the one I selected for bikepacking (mostly because it was not really being utilized) and after riding it so much the past few months I needed to give it a little TLC.

Adjusting the shifting used to be a pretty simple thing for me, but I'm sorta rusty and it took me a while to get everything just right.  I mean, I guess it's right.  Even though that bike has gears, I still ride it like a single speeder.  That usually means that don't shift until I remember that I actually have the means to do so on that particular bike.  It's a habit that I've been trying to break, and it will probably help tremendously on that long ride next weekend.  You know, to keep me from killing myself from pushing too hard.

The whole reason I even own that bike is because I was racing my single speed against geared riders and it became a disadvantage as the season went on.  It wasn't always that way, but on some of the flatter courses I had trouble keeping up because I couldn't spin fast enough.  So when I got on with Niner and the opportunity came to get a different bike just for racing, I took it.  It helped for sure, and probably does for this bikepacking stuff as well.  Anyway, since I started wandering the earth on that bike I'd wanted to change the tire configuration.  It was setup all racey, which meant (for me) that I had two different sized tires.  On the front I had a Maxxis Ikon 2.35 and the rear was the same tire but in the 2.0 size.  I kept saying I would replace the rear tire when it wore out but I never remembered to do it.

Well, that's when the panic set in last night, because I went way past worn out...

That thing was pretty much bald and was quite possibly a safety hazard.  Luckily, I still have plenty of new tires in the shop here. 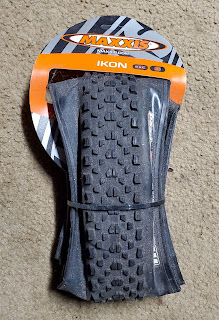 With three different mountain bikes and fewer rides (until I started on this adventure anyway) it had been a long time since I'd changed tires and set them up tubeless.  I did all the soapy water Stan's stuff and fought to get them seated, and finally got some new meats on my wheels.

I wanted to wait until I was closer to my Florida trip to do this, but even for me this was too close to last minute.  At least I will have time to get in a few rides before I head down there to make sure everything is good.  It's not like installing new tires in rocket surgery or anything, but it had been a while.  Panic for nothing I suppose.

Another item of neglect I found really has no excuse.  While I have several bicycles and rotate through them on rides (usually), I typically only use one pair of shoes.  And as a crankbrothers pedal guy (and still somehow supported by them), those soft brass cleats wear down pretty bad if you don't pay attention.  I knew they needed to be replaced, but I didn't realize that it was that bad.

Changing cleats on shoes is usually pretty damned easy.  In this case though it was a major pain in the ass.  I fought for more time than I'd like to admit getting those damned things off of my shoes but I finally did.  And, I managed to get the new ones on in precisely the same spot on my shoes.

That was pretty much it.  I realized bike maintenance is pretty boring (and even more boring having to read about someone else doing it), but it's necessary.  If you take only one thing away from all of this, remember that if you use those particular cleats then make sure you stay on top of them to make sure they aren't too worn out.  I realize a lot of you use other brands, but who gives a shit.


With my bike in proper working order I started to focus on my bikepacking gear.  For months now, I've been carrying a ton of shit on my bike.  This stuff was most likely crammed into a bag, never to be seen again even though I knew it was there.  Obviously I'd dig into these bags every once in a while (especially when I got my new tent) but for the most part I wasn't really sure if I had exactly what I needed.  In the back of my mind I was afraid to unpack most of it because I'd spent so much time trying to figure out where the good spots were for space and weight distribution.

I decided to tackle that beast and unpack everything to see what kind of shit I'd been carrying around all this time.  Aside from actually removing the bags from the bike (that would be dumb) I laid everything out on the floor of the shop. 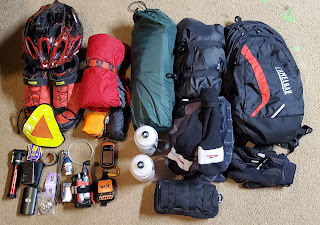 It wasn't as bad as I thought, but at least now I had a chance to go through my gear and make any last minute corrections.  I guess this is a good time to talk about what I have there, how I plan to use it, and where it goes on the bike. So, working from the top left of the photo moving across row by row (kinda), here goes...

Helmet and shoes.  Pretty important for a bike ride.  These items go on my head and feet, respectively.  Try to keep up here.

Wet weather gear, consisting of a rain jacket and pants.  If it rains (which happens a lot during Florida "Winters"), I'll be prepared.  If the forecast doesn't call for rain I'm bringing this stuff anyway.  It will still probably be cold down there, and since this gear is also windproof is can be used for extra warmth.  It's lightweight so I don't really notice it on the bike anyway.  I keep it on top of the seat bag, secured with the built-in bungee straps.

Tent.  If you've been following along, you know that I ditched the hammock in favor of a tent for several reasons.  I'm still happy with it, and it is stored in the seat bag.

Sleeping bag.  It might not look like a sleeping bag, but that's because I have it stored in a dry bag so, you know, it doesn't get wet.  It attaches to the handlebar roll/bag.

CamelBak.  I keep debating if I want to use this.  Over the last few years I'd weaned myself off of having a bag hanging on my back for most rides.  The exception was when I headed up to the hills, where hours in the saddle meant that I needed extra water.  I'm pretty sure this Florida adventure will require extra water, but for some reason I'm struggling with the idea of wearing a backpack.  I haven't used it for any of my bikepacking rides so far, but I'll test it out this weekend and decide from there.

Back on the left side...

Safety triangle.  So I'm more visible.  I'd like to not be dead so maybe this will help.  Safety first, bitch.  It attaches to the back of the seat bag.

Emergency sleepy bag/bivy.  In case it gets extra cold at night and my lightweight sleeping bag doesn't keep me warm enough, I can bust this out for extra insulation.  It's basically one of those emergency space blanket thingys, but in sleeping bag form (and a little thicker.)  It resides in the seat bag.

Inflatable camp pillow.  Um, it's a pillow.  For my head.  While I sleep.  It also resides in the seat bag.

Two water bottles.  For water.  Duh.  Since my frame bag takes up the space where the bottle cages go, these are in bottle bag things on the handlebars.

Change of clothes.  I plan to ride for multiple days, so I'd like to not be in the same nasty shit the whole time.  There is a jersey, baggy shorts with liner, and a pair of bib shorts.  And of course a nice, warm pair of DeFeet socks.

Windproof gloves.  These are good for really cold weather, but also work well for any temps not above 70.  I have other gloves if it ends up being warmer than that, in which case these will go in my jersey pocket.

Garming eTrex20X.  This is my main source of navigation.  It has the course map and all the cues loaded on it.  I also have my Garmin 800 (not pictured) attached to the bike for backup.

SPOT Tracker.  This is so you folks at home can follow along.  It will report my position so you can see my little dot cross the state along with everyone else.  Link will be shared soon.

Small first aid kit.  Just in case.  I don't have a spot on the bike for this, but I really want to bring it.  If I decide to rock the CamelBak, it will go in there.  I hope I don't need it, but it's probably a good idea to have.  It's not loaded like my trauma bag, but it will be good enough.

And, other than a few assorted snacks, that's it.  It seems like a lot of shit, but once I put it out there in front of me I realized that it's not that bad.  I've gotten used to the weight over the last few months, so I shouldn't have any issues.  I definitely feel better now that I've taken an inventory.  It's all back on the bike now, ready for this weekend's adventure/final shakedown ride.

I'll be back next week of course.
Posted by TheMutt at 9:01 AM