It's The Final Countdown

Over the weekend I wanted to take one final shakedown ride to make sure everything is ready to go for the Cross Florida Individual Time Trial.  Although I'm pretty confident that my gear is ready, I wanted to make sure my mind and body were ready too.  I planned a short-ish route of about 45 miles that would make me at least feel like I did something.  That's not much mileage compared to what I am trying to do this weekend, but it would have to do.  Besides, it's not like I can get into any better shape at this point.

When planning my route, I found out that I've started to get bored with my usual treks from the house.  So this time I did something completely different from my normal stuff.  I headed north towards the Lake Norman area, specifically to my favorite bike shop, The Cycle Path.  The goal was to get there in time to watch the annual Christmas parade (as it is tradition now) but also to get in a fair amount of singletrack to make sure shit doesn't fall off of my bike while I'm riding on the rough stuff.  And to make extra sure of that, I wanted to get as much off-road riding as possible. 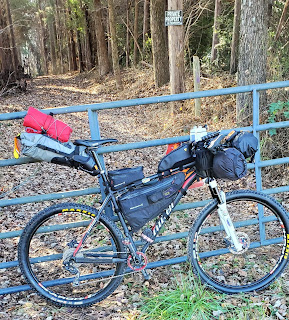 I planned my route without a ton of certainty, hoping that the cut-throughs I saw on the satellite view were ride-able.  I was rewarded more often than not. 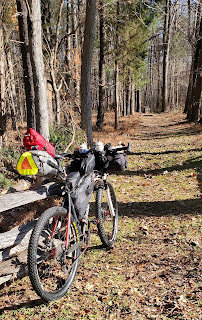 As usual, I had to ride on a few roads, but I tried my best to keep that to a minimum.  Cutting through neighborhoods happened quite a bit, but in one instance it led me directly into one of our local trails. 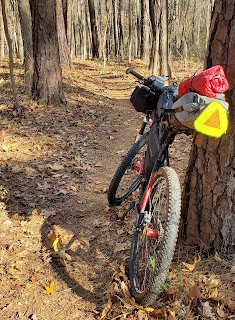 The trail was fun.  I hadn't been to that one in quite some time, so even though it was once very familiar to me it felt like a new trail that day.  Once I made my way through the singletrack to the exit, I realized that I did a pretty damn fine job with the whole weight distribution thing.  Handling was great, even with me carrying a ton of extra shit attached to my bike.  I patted myself on the back and kept rolling.

I reached the bike shop (after stopping to grab some foodz) and sat for a while, enjoying the parade and talking to my friends that were there.  It was nice sharing with them my plans for Florida (hey, they asked first) and also just to spend time with good people.  Eventually I had to roll out because I had non-bike plans later, so I hit the road.  I didn't plan the return route at all though, instead deciding to just "wing it."  I found a new (to me) greenway and and enjoyed the shit out of it. 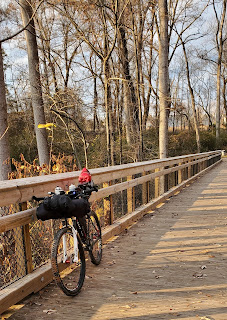 Even though I never bothered to check a map to see where this thing would put me out, I didn't care because I was having fun,  It was pretty back there and I had the place mostly to myself. 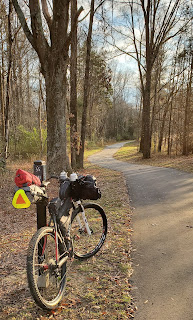 The greenway eventually ended and I popped out into familiar surroundings.  From there I just retraced my steps home and rolled in feeling pretty confident that I am ready for the big adventure.

My dog Carl though, was full of judgement for some reason. 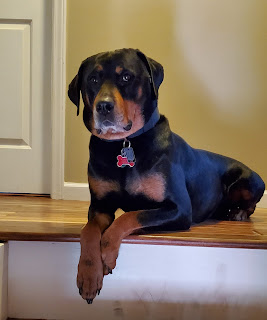 I think he was pissed that I was gone all day.  Wait until he figures out that I'll be gone for ten days.

Yup, I'm as ready as I can be for CFITT.  Equipment, fitness, and attitude.  I'm going down there to have fun, see some backcountry Florida, and push myself beyond my norm.  There's no turning back now.

I head south tomorrow.  It's indeed the final countdown.

I should be back here one more time before I hit the road.
Posted by TheMutt at 8:32 AM