Nothing Left To Do But Keep Pedaling

Next Thursday will be here before I know it.  That's when I leave for the Sunshine State, and two days after that I embark on what will be the biggest challenge I've even done on a bicycle.  Back in May when (out of the blue) I decided I was doing the Cross Florida Individual Time Trial I didn't realize how much effort I would have to put in just to get ready.  I mean, not only was I planning to ride more than twice as far as my longest distance ever, I also didn't know shit about bikepacking.  In the past six months though, I've sorta figured the bikepacking part out and I'm really enjoying it.  The distance part?  I guess we'll see.  I've done some pretty long rides with a fully loaded bike and all that, so I'm hoping a positive attitude can get me through my adventure.

Lately though, I've been a wreck.  As the day gets closer, I seem to suffer from more and more anxiety.  Although this is a "race" with many other people participating, it's really a personal challenge that I have to complete all by myself.  Each day I feel the anxiety growing, but I know as soon as I dip my rear wheel in the Atlantic Ocean and roll off the beach towards the west coast of Florida I'll settle in and be just fine.

In addition to this event being the longest and most difficult bicycling adventure I've ever decided to do, it's also the most selfish.  Once I made my decision I had the full support of my friends and family but it has come at a price.  Over the last few months I've spent time alone on the bike to prepare, which has led to me missing time with those same friends and family.  This is MY race and I'm solely responsible for getting ready and being able to drag my ass across the state, but I sorta miss being social.

That being said, I decided to do this for a few reasons...

First, I miss Florida.  The REAL Florida.  And what better way to see that part of the state than by bicycle, riding off the beaten path far away from most people and all the tourist-y shit that place is known for.  I plan to enjoy the scenery while I'm suffering, and seeing the Florida backcountry for three (or more) days should keep me motivated.

Second, I needed a challenge.  I was sort of bored with plain old mountain biking.  Riding alone with a fully loaded bike for a couple hundred miles and camping along the way seemed like a good way to switch it up.  It's been working so far.  I like being alone, and I've definitely been doing that a lot.

Third, who gives a shit.  Yeah, this will be a difficult challenge for me, but not everyone will see it that way.  My hardcore bike friends have done things way harder than this so it's probably not a big deal to them.  My non-bike friends?  They think the whole thing is crazy.  Maybe it is, but who gives a shit.  While I appreciate the support I've been given (and will hopefully continue to get), I don't have time for any negativity.

Did I miss anything?  Probably.  There are probably other reasons, but the simplest one is just that I want to see if I can do it (and of course have some fun along the way.)

Anyway, I'm not sure where I was going with all that.  As the day approaches though, I'm still getting ready.  After turkey was consumed last Thursday, I planned a ride for the next day.  It was Black Friday, but that doesn't mean a damn thing to me.  While a lot of people were out shopping, I was outside all by myself. 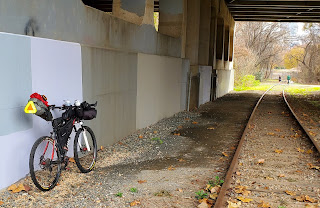 It was sort of eerie.  Even the local greenways were pretty much empty.

I did one of my usual routes, but I added some extra adventure here and there.  I tried to take cut-throughs that weren't there and ended up spending a lot of time backtracking. 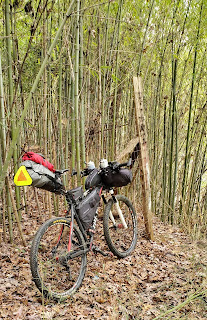 Although I had a modest mileage goal of around fifty, the main objective was to spend at least 6 hours in the saddle.  It's too late to add any fitness at this point, but it's definitely not too late to keep my mental game sharp.

Like most of my local rides, I spend much of the time on greenways too.  Two in particular I rode to and from both ends. 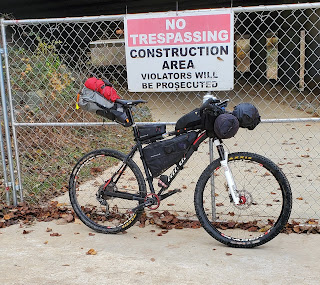 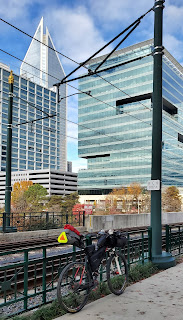 About six hours in, I was only about ten miles from home.  I figured I would come close to my secondary goal (mileage-wise) but I felt like I could stand some more time in the saddle.  But then I felt like I should be social for some reason.  I don't know why that thought entered my head at that particular time, but I obeyed it and took a detour away from my house and headed towards The Spoke Easy to break up my "training."

It was worth it.

What's unique about this is that it's the first time since I started bikepacking that I've stopped for a beer.  In the past I would always wait until I got back home to reward myself.  Even the overnight trips I did were without beer.  I know, that's odd for me.  Who gives a shit.  I had a second beer, shot the shit with some friends I hadn't seen in forever, then hopped back on the bike towards home. 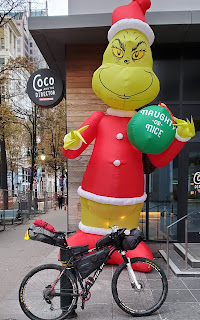 The beer stop was much needed.  On the way back home I was in a better place mentally (and not just because of the alcohol.)  I started to remember why I am riding bikes in the first place... for fun.  Damn all the stress, I'm here to have a good time.

When I got home I ended up with a little over seven hours of riding time (and yes that's minus the beer stop.)  I just stood in my garage thinking about what comes next and a sense of calm came over me...

Then I started looking at all the shit I still needed to do to get my equipment ready.  More on that tomorrow.

Yeah, I said tomorrow.  Two days of blogging in one week?  You betcha.
Posted by TheMutt at 8:38 AM

Mutt: If I can drag a 55 pound BOB trailer around the White Rim in Utah at 53 years old, I know you got this.