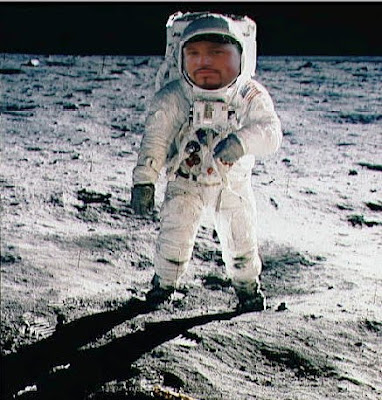 Well, last night I found myself with a little time on my hands, so I decided to make the most of it. My bike was a filthy whore, so I gave it a bath. I usually keep The Big O clean enough to eat off of, but I’ve been neglecting it for a while lately. Since I’m considering changing up the drivetrain I figured that it should be clean. After washing it, I grabbed some of these: 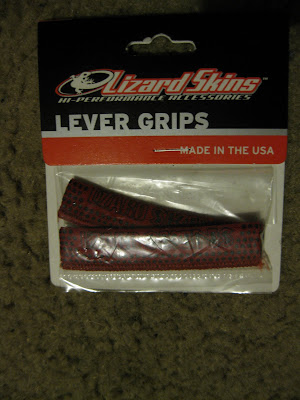 Yeah, I love Lizard Skins, but that’s not the main reason for using lever grips. Sure, they look nice, but they do serve a purpose: 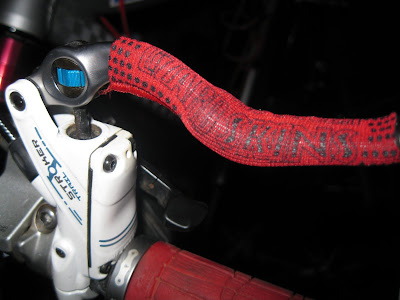 They keep my fingers from slipping off of the brake levers, and my bike just looked naked without them. Lizard Skins sells some pretty cool bike accessories, so I suggest you go see what you can find for your bike. Okay? Good. Anyway, after that menial task was complete, I got rid of this thing: 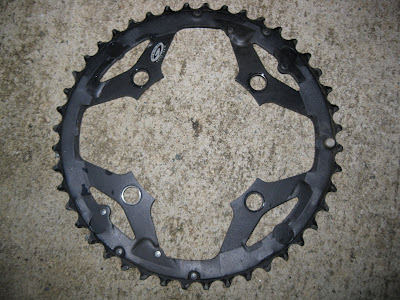 Yeah, that’s my big ring. I don’t need it, so I just unbolted the chainring bolts and took it off. Wait, why did I even bother modifying the three speed crankset when I have a new one to replace it with? Well, for starters, I’m a little hesitant to change over to the crank. Not the crank so much, but the bottom bracket. When I got the cranks (and included bottom bracket), I assumed that it would be compatible with the Shimano external bottom bracket I currently use. I was wrong (a recurring theme for me), so that meant that I had to use the Truvativ BB with the crankset. After reading some reviews on the GXP bottom bracket, I learned that it pretty much sucks.


All of a sudden I wasn't so enthusiastic about using my new crankset. I decided last night to see if the included bash guard on the Truvativ crank would fit my Shimano stuff, and it did. After taking off the big ring, I put the bash guard in it’s place: 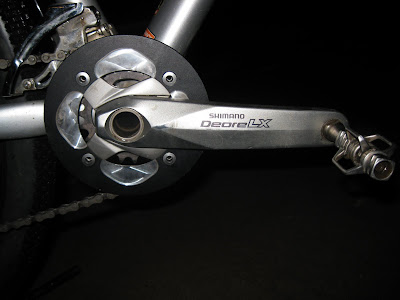 A perfect fit, and I was happy. I didn’t have time for much else, so I left it as a 2X9 setup. I will eventually remove the small ring, but I need a little extra time to completely remove the cranks from the bike. I did it the lazy way, but I don’t care. I had time for a little test ride, and it worked just fine. I won’t be shifting the front derailleur anyway, so I’m sure things won’t really be any different when I take that itty bitty ring off of there.


I’ll get to test it out thoroughly this Saturday though, when I head up to the Kerr Scott Trail System for a hell ride. I’ll be meeting quite a few of our local riders up there to ride on all three trails, one after another. Yep, Dark Mountain, to the Overmountain Victory Trail, to Warrior Creek, and back to the parking lot via the OVT again. We’re talking over forty miles of pain, er singletrack goodness. I probably won’t miss that big ring, but I’m sure I’ll be looking for some smaller gears towards the end of the ride.


As for tomorrow, I won’t be here. my boy and I are taking a much needed day off and heading out for a ride at Bent Creek near Asheville, NC. I’ll probably take the squishy bike, since Lunchbox won’t be down for any kind of hammerfest (and so I can be comfortable.) Hopefully I’ll come back Monday with lots of photos and stories. Hell, hopefully I come back alive. So yeah, that could be a reference to the upcoming Halloween “holiday.” Maybe I should be riding this: 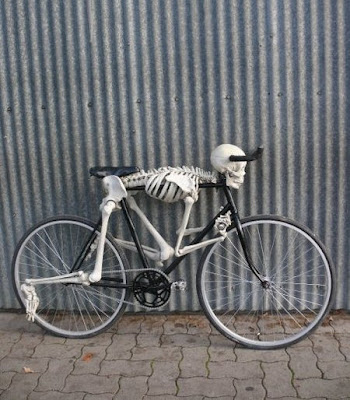