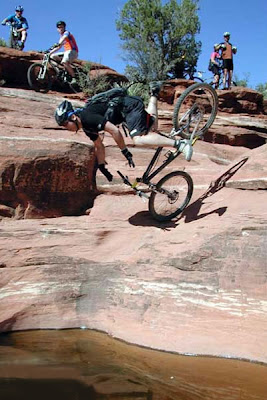 If you spend time riding a bike you probably spend some time crashing too. I don’t care how good your skills might be, falling down is inevitable. Shit happens, and it happens to all of us. I just read an article yesterday regarding this very subject, and it got me thinking a little bit (I’ve been known to do that form time to time.) Here’s what I’m talking about:


I was actually shocked that ER visits had gone down, at least according to that study. Are we really getting hurt less or are we just sucking it up and dealing with it on our own? Maybe those less frequent visits are due to the fact that people have little or no insurance, no funds with which to pay the out of pocket costs, or maybe they just don’t want to miss any work/school time. Those people probably suck it up and deal with it on their own. It puzzles me a little bit. I kind of figured that since the sport of mountain biking is growing so fast that injuries would actually go up, but I really don’t know shit about statistics. This little tidbit from the article kind of goes along with what I was trying to say though:


Some caveats: Because the study only looked at data from ERs, it doesn’t include information from smaller health care facilities or injuries treated at home. Also, how the injury occurred was self-reported, which could be a problem if the person was trying to conceal what stunt put them in the ER.

I can see it now:

Doc: “So, how did you do this? Your choice of clothing suggests you were riding a bike.”

Doc: “You mow the yard in spandex?”

Patient: “Yeah, but only because my sponsors want me to wear this when I race, I mean I like the way those bicycle guys dress. I would never ride a bike though. It looks too dangerous.”

I can’t say for sure that people are doing that, but I would be willing to bet that they do. Maybe your wife would be pissed if she found out you wrecked on the trail, especially when you convinced her that the sport was “safe.” Injuries happen, but some people just don’t get it. Hell, my boss always tells me, “Don’t come back in here hurt after riding your bike.” Funny, because people can get hurt doing all kinds of shit, with or without a bicycle.


I’ve been pretty fortunate with injuries on the bike. Most recently, I broke a rib (but you already know that.) Two years ago, I dislocated my shoulder after going over the bars riding around a parking lot. A few years ago back in Florida; I went over the bars and knocked myself out, getting a nice concussion in the process (I wasn’t wearing a helmet though.) I get scrapes, cuts, and bruises quite a bit, but nothing too major. I would imagine that it’s about the same for most of you as well. That's no reason to stop riding of course.


What’s the point of this? Hell, I don’t know. Just be careful out there I guess. If you have fun riding your bike and you love doing it, then nothing will keep you off the bike. And yes, you will crash, but that’s a part of mountain biking. Those trees don’t just jump out in front of you on the trail, do they?
Posted by TheMutt at 8:22 AM