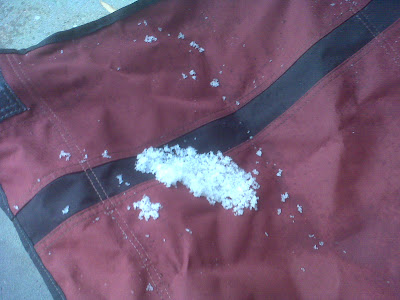 Okay, maybe not. When I woke up Saturday morning, I just had to get out on the bike. The local weather channel had predicted some precipitation for the afternoon/evening, so I knew that the morning would be my only chance. There was a problem though. It was cold, and I mean really cold. Also, Little Miss Sunshine informed me tat it was snowing outside. What? I ran outside and noticed that there were small snowflakes falling down, but you could hardly see them. I had to get on the trail, and fast. I awoke Lunchbox from his teenage slumber and we got ready to go.

We decided to hit up a short local trail, since I didn’t want to be stuck on some epic ride when the real snow started falling. Lunchbox and I arrived at the trail, and bundled up as best we could. My boy even got a chance to try out his new DeFeet arm warmers: 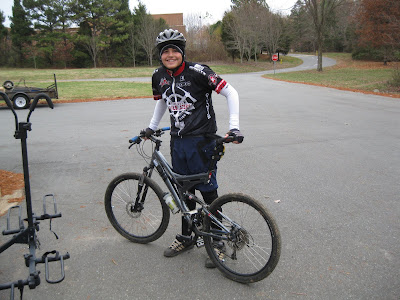 After taking a few minutes to get ready, we hit the trail. The faster we went, the colder it got. We’ve ridden our bikes in the cold before, but I guess we weren’t used to it yet. Our hands and feet were the coldest, but everything else was pretty chilly too. The ride wasn’t too bad though, and I was happy to be out on my bike for the first time in a while. Lunchbox said, “Hey, at least we got to ride a little.” And with that, we finished our single lap and packed up. We were happy to get back into my nice warm truck.


Our next stop would be Cornelius, NC, so we could watch the local Christmas parade. My pal Mark from The Cycle Path was gracious enough to let us watch the parade from his shop, since it’s right along the route: 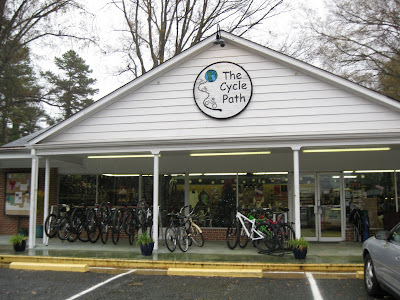 Just as the parade started, the winter weather came down from the skies. It started out as a little ice/sleet: 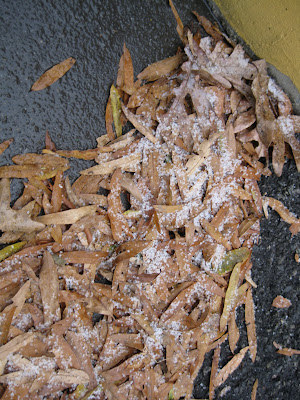 We stood out in the frigid wintry mix, and I got a few photos from the parade. A local unicycle team was at the beginning of the parade, which was very interesting to me since I do ride one of those one-wheeled things sometimes: 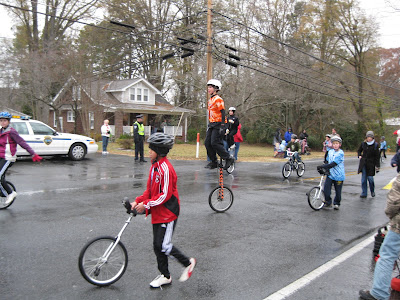 There were other cycling-related things in the parade too: 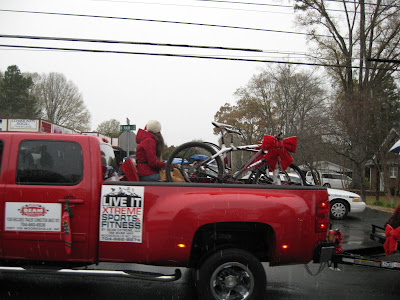 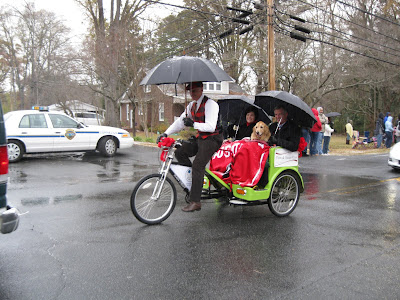 At this point, the sleet started turning to snow. It wasn’t sticking, but it still made for a nice Christmas parade (especially for a former Florida boy): 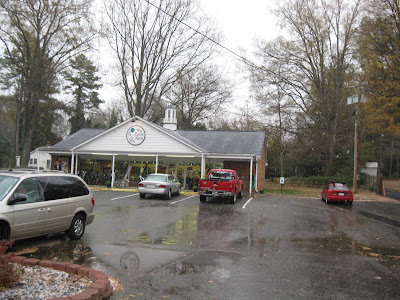 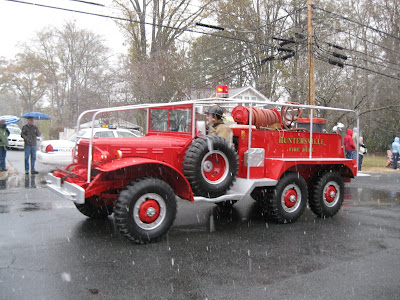 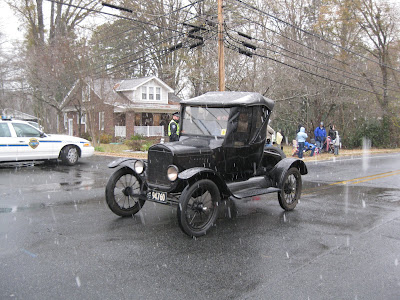 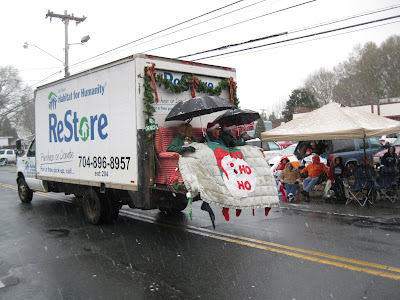 We saw some strange stuff as well, including this uniquely Southern float: 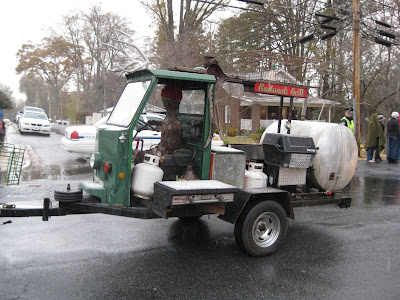 A local fitness promoter/business had their minions marching along with some of their accessories. These were odd: 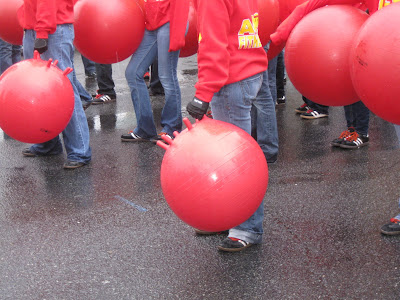 The local chapter of Girl Scouts came rolling by, and they looked like they were making cookies. 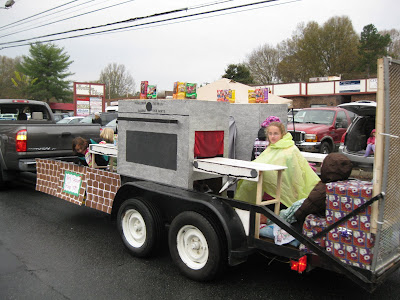 Suddenly, I realized why they call them “Girl Scout Cookies.” 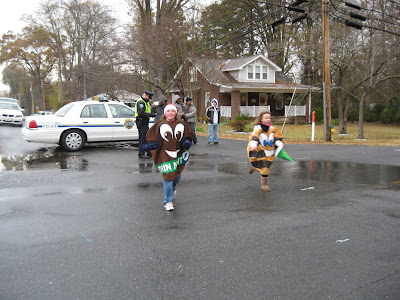 This just in: Girl Scout Cookies are made from real Girl Scouts. Yuck.

Remember, we are in the South, so it’s all about the “true” spirit of Christmas: 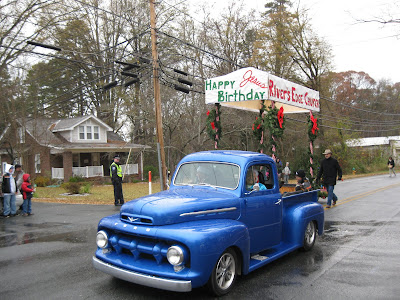 I wonder if Jesus has ever done anything for Santa Claus on his birthday. Hmmm.


Horses are a part of most parades, and this one was no exception. Check out the Christmas Desperado: 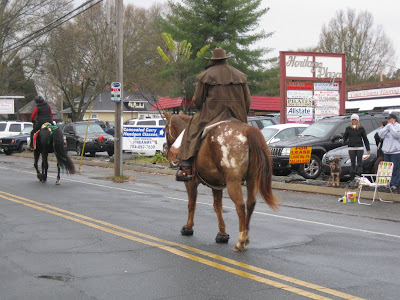 Of course, there were some Clydesdales (not big boy racers like me, but those big horses.) It made me want a beer, but certainly not a Crapweiser: 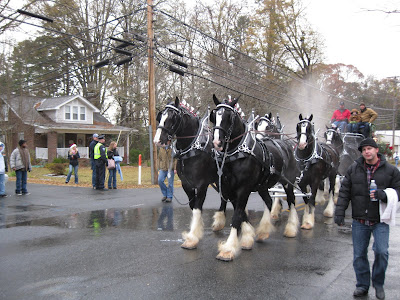 You can’t have a Christmas parade without Santa, so he showed up with his sleigh and reindeer: 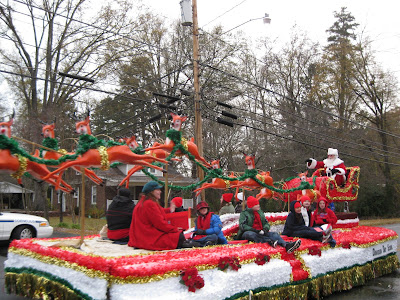 Now we were in the Christmas spirit. The parade was over, the snow had cleared, and we headed home. My next step was to get all the lights on the house and decorate the yard. I didn’t take any photos, since I was busy trying not to fall off of the ladder. Everything came out nice, and I didn’t even have one of those Clark Griswold moments. I even got a chance to check in on The Chili Man to see how his decorations were coming along. I didn’t get any photos, but I did manage to ride my 29er down to his house and deliver some beer. That’s just my way of spreading the Christmas cheer.

It was a good weekend, even though I didn’t get to ride as much as I wanted to. It’s gonna be even colder around here this week, so I’ll have to bundle up even more if I plan to go out for a ride somewhere. Anything to keep me off that damn trainer I guess.
Posted by TheMutt at 8:08 AM