I Was Drunk When I Wrote This 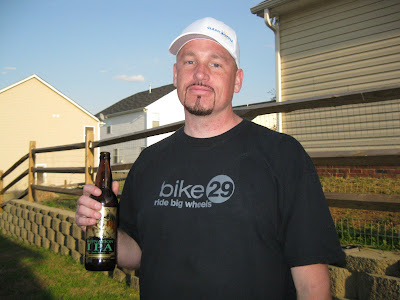 Okay, not really. I'm at work, so no drinking until later this evening. I am still pretty worn out though. After yesterday’s Shootout On Anglers Ridge, I feel like I just climbed Mount Everest. Sure, it’s just the beginning of the season, but this race seemed a lot tougher than I thought it would be.


I am busy as shit this morning with work and junk, so I don’t really have time for a full-on race report. For now, I’ll tell you that I finished much better than I thought I would (which was one place out of DFL.) I actually hung in there for a while, but had a few unexpected issues. I made some new friends, avoided some disasters, and actually had a lot of fun. It was hell, but I enjoyed it for some reason.


I’ll be back tomorrow with a much better report, and maybe I’ll even include some funny stories (but probably not, so don’t hold your breath.) Oh yeah, I’ll also have to talk about my Bike29 teammate and famous Internets blogger Rich Dillen. Stay tuned.
Posted by TheMutt at 8:45 AM

I was drunk when i read this :>