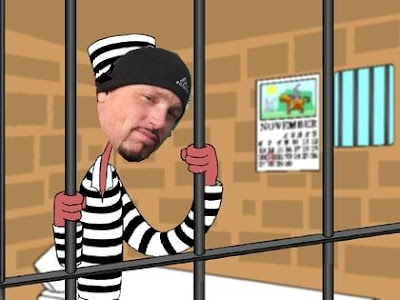 With the start of the Southern Classic Series looming next weekend, this will be my last “get out and ride for fun” weekend for a while. There are three races in a row, starting next Sunday the 13th with the Shootout On Anglers Ridge in Danville, VA. Next is Hobby Park, and then I get to travel to the unknown (to me) trails at San Lee Park. I don’t get a break at all, because the next weekend after those three races is the 6 Hours of Warrior Creek.


I guess that means I should get out and enjoy my last weekend of freedom for a while, before the race season gets in full swing. I will enjoy it all right, but I won’t be taking it easy. My plan is to head out to the U.S. National Whitewater Center for some good ol’ fashioned pain and suffering, and I’ve even convinced the Dirty Party Cycle to tag along. He seems to think that he won’t be able to keep up with my crazy pace, but he’s in for a surprise. Maybe he doesn’t read this shit I write on here, because if he did he would know that I am not in very good shape right now. We’ll see how that goes I guess. It should be fun.


Speaking of being out of shape, I have been working to remedy that. I’ve been riding a bit more, but I wouldn’t call what I’ve been doing “training.” I figured that it would take some pretty hard work to knock off the offseason weight I gained, but I really didn’t formulate any kind of plan to do it. Sitting at 240 pounds at the start of the Winter Series, I thought that it would take almost the entire season to get back down to my “racing weight” of 220 pounds (even though it only took two months to pack on the pounds.) I’m proud to announce that things are going as (not) planned, as I am now down to 231 pounds as of yesterday.


Wow, a whopping nine pounds. I haven’t done much of anything except ride more, so that’s pretty encouraging. I guess that means that I don’t have to cut down on my beer intake. That’s probably a good thing since I scored a lot of that tasty drink on my last trip outta town. 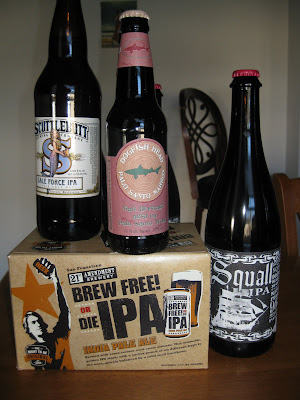 I seemed to have hit the mother lode, for sure. I grabbed another 6 pack of Brew Free or Die IPA, from 21st Amendment Brewery, along with some Smuttynose IPA. The real treat looks to be what I got from Dogfish Head.


The first (in the small bottles), is called Palo Santo Marron. It’s a brown ale, and it’s 12% ABV. Wow. I haven’t tried one yet, but I’ll let you know when I do. It looks like it will be yummy though.


Next is one of my all-time favorites, Squall IPA (not to be confused with Squab.) Squall is a nice, hoppy beer, even though it is only 9% ABV. It is really strong, but the taste is phenomenal. I haven’t had it in a while, so you can imagine my joy when I found a few bottles at the store. Yum. Yep, I scored an entire case of Heavy Seas Loose Cannon. They are out of Baltimore, MD, so I figured that I could acquire a good amount of it while we were in the D.C. area. In fact, Little Miss Sunshine and I spent an afternoon in Baltimore while we were away, but I didn’t want to bore with more of our vacation photos. The brewery is open for tours, but a quick check of Twitter while we were there informed me that they were closed that particular day. Nevertheless, I had some on draught at a local pub there, and also walked away with that big-ass case of it later on when we went back to the D.C. area. Total beer success, indeed. I believe the Dirty Party Cycle and The Chili Man will help me with my excess beer, so none of it goes to waste. Hell, I’ll pass some along to Dicky if I see him around.


That’s it for the day. It looks to be a nice day tomorrow, so I’m getting out to ride. I suggest you do the same.
Posted by TheMutt at 8:10 AM

had fun sat, don't get to be the "dirty" party cycle too much.


my bike thanks you for the therapy session and chain massage too.