So, over the weekend I got a chance to help out a local trail in need of some love. Bright and early Sunday morning, Lunchbox and I headed over to Fisher Farm, up in Davidson, NC. The trail boss had invited some folks to come out and help with some maintenance issues, and we were glad to get out of the house and get dirty. We all met in the parking lot, and were given our assignments. 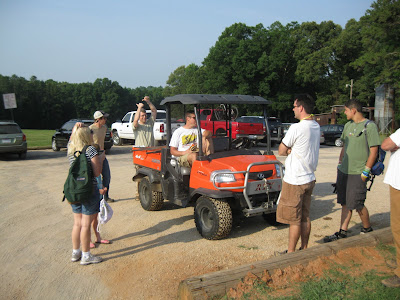 The plan was to use some fancy new material (better than plain ol’ gravel) to repair some spots that had a problem letting go of mud. After walking back into the trail, we found a pile of it and started loading up wheelbarrows to carry off into the woods. 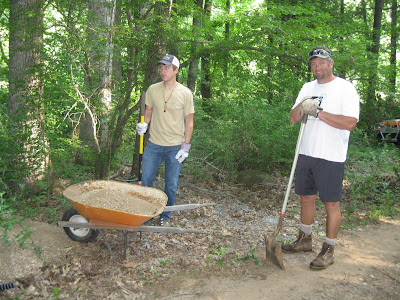 Also, we had to address some drainage issues. A few spots need attention, and our happy trail working crew got right on it. 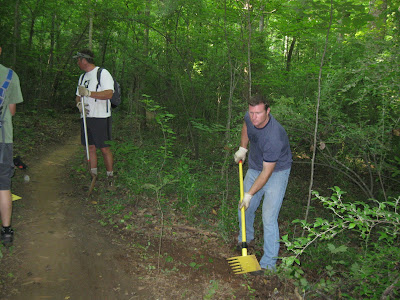 Even the trail boss got busy out there: 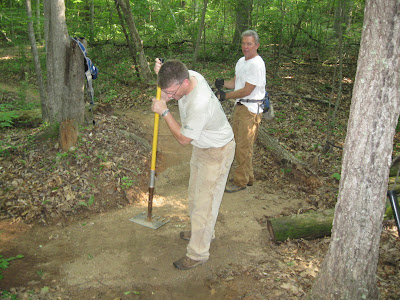 Lunchbox was there of course, and seemed to really enjoy fixing the trails he likes to ride. 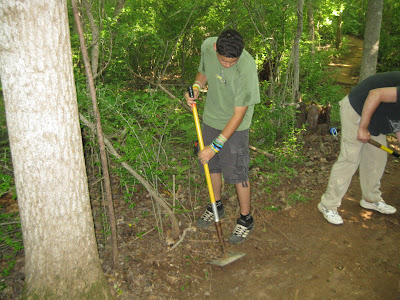 After a few hours in the heat, we had used up most of the pile of material and fixed everything that was on the list for fixin’. It was time to kick back and enjoy some ice cold watermelon for our troubles. 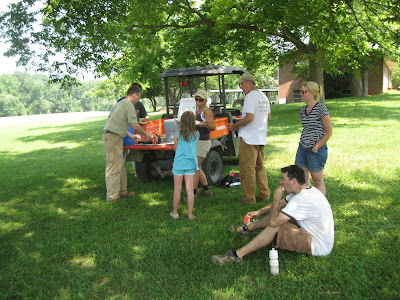 Everyone liked the refreshing treat, except for the MadSS and Lunchbox, who for some reason don’t dig the magical fruit. 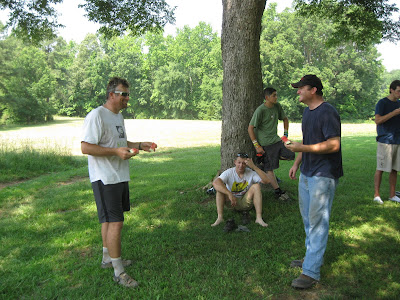 It was a job well done, and it was actually quite fun to be out there working. A few people headed out and got on with their day, while Lunchbox, the MadSS, and I hit the trail. Lunchbox was a little leery at first, since he thought the MadSS would try to kill him with his super-fast singlespeeder pace out there. He was reassured that it would be a modest jaunt through the woods, and agreed to tag along with us. Things would change though.


We started off at a nice pace, but Lunchbox was lagging behind a little. We would slow up a bit to wait on him, and pick up where we left off. When we came up to the first difficult option, I told him he could meet us at the exit, while the MadSS and I got our skills on. After a few short minutes, we got back on the main trail. Lunnchbox was nowhere to be found though.


The MadSS figured that he couldn’t be too far ahead, so the challenge was to catch my youngin’. We stepped up the pace quite a bit, and it was fun trying to keep up with my supersonic singlespeeding pal. We were looking for Lunchbox at every turn, and we were surprised that we didn’t even get close. After riding all the way to the end, there was no sign of him. We started to wonder if he had gotten lost (very hard to do out there.)


We waited for a bit, and briefly thought about going back out to look for him in case he had crashed and was off in the bushes somewhere. For some reason I glanced over at the parking lot though, and saw my kid sitting down relaxing. We rode over there and found out that he had finished a while ago. He even mocked our old asses when he mentioned how fast he rode out of there. The MadSS called him a sandbagger, and I agreed. He was playing possum the whole time, until we let him out of our sight.


I guess that’s when you know you’re getting old, when your kid starts beating you at stuff. Damn it. Time to train more.
Posted by TheMutt at 6:56 AM