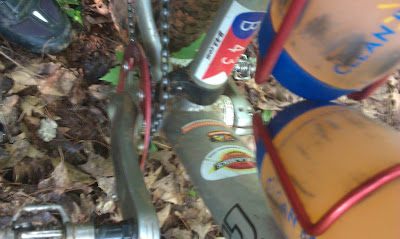 I’ve still been battling with chain drop issues, even though I thoughtI found a fix. After some local testing, I made a few more adjustments to my bike (and Lunchbox’s too.) When we rode at Dark Mountain during the Burn 24 Hour Race though, I dropped my chain five times. Lunchbox lost his three times, and we were both pretty frustrated. Hell, I even made a video out of it (including a bonus crash from me not paying attention.)

So yeah, this sucks. I was determined to keep trying to find the issue, since there was no way I wanted to go back to a full set of gears of front. There was one more thing to try though. I finally broke down and bought this: 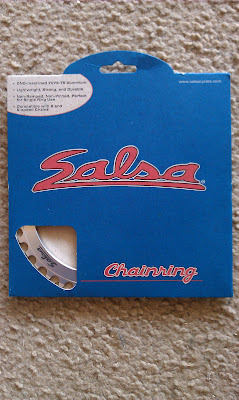 A new Salsa singlespeed 32 tooth chainring. Non-ramped, non-pinned, for my riding pleasure. I tried everything else, and this was the last resort. I put it on last week, and got out for a ride at Fisher Farm (after the trail work day.) After beating the shit out of my bike on the roots and rocks out there, I thought maybe I had finally gotten it right. I didn’t drop my chain once, and that was encouraging. I wasn’t completely satisfied though, so I decided that one more test was in order.


When I rode at North Meck da udda night with the Dirt Divas, I thought that this would be the proving ground. This is the same place where I first tested the Awesome Strap, and it is a fine place for such testing because it is rooty as shit. On the first lap out there, Lunchbox and I rode together. I haven’t made the switch on his bike yet, so his bike would be the control in this experiment.


No dropped chains for me, five for the youngin’. He was pretty frustrated, but I told him that it was actually good news. Since my chain stayed put during the ride when his didn’t, that pretty much told me that I had found a solution. I told him I would get a singlespeed ring on his crankset as quick as I could.


I’m pretty happy I finally figured it out, but I’m a little pissed that I took so long to do it. That damn chain dropping issue cost me a podium spot in the Catawba Riverfront Classic, and it caused me countless hours of frustration on “normal” rides. That looks like the end of my bike issues for now, until something else pops up. It always does.
Posted by TheMutt at 6:59 AM

You need a real chainguide, Paul's, Rohloff, MRP... something. That 3rd Eye sucks balls (many a misadventure I had with mine).