When the “race” part of Single Speed  was over, I felt like I just wanted to stay on the ground forever.  After having a few beers and a big ass burrito from a food truck though, I finally got off my ass just in time to watch the bike derby. 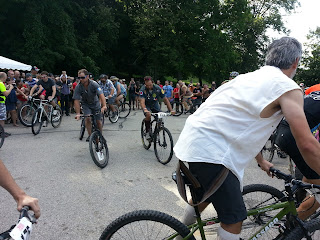 Dejay is in the mix to defend his belt, but he didn’t make it to the end this year.  He gave it a valiant effort, and it was fun to watch.  They also held a game of “bucket ball” to determine the hosting rights for next year.

I was in no shape to compete (and possibly bring the event here to next year), so I watched as I finished my beer.  After it was all said and done, it looks like next year’s road trip will be to .  Oh joy.

The afterparty was winding down, and with the after afterparty only a few hours away I wanted to go back to my room to clean up and put some ice on my shoulder.  The DrunkCyclist crew had other plans though.  They were meeting across the lake for some more fun, and as much as I wanted to go I had to decline. 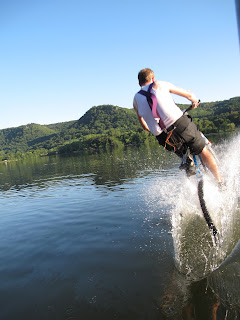 I went back to the room, took a hot shower, put some ice on my shoulder and crawled in bed.  I didn’t really intend to spend my time in in bed nursing an injury, but there I was.  I was depressed, hurting, and wishing I could just go home.  Before I got any more down in the dumps though, Good Guy Greg rolled in talking about how much fun they had on the water.  His smile immediately turned to a look of concern though.

“Are you doing okay?”

Surprisingly, I was feeling a little better.  My shoulder wasn’t gonna heal itself instantly, but my mood was better and I wanted to get the hell outta bed.  I (painfully) got dressed and we rode our bikes about a mile or so away to the party.  I wasn’t gonna let some stupid separated shoulder spoil my fun.  I mean, we had stickers to hand out. 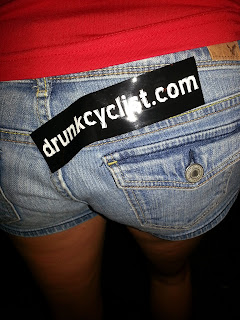 There was a live band, called DNF.  I found out they were called “Dad’s Nighttime Friends”, and they rocked it out.  Switching from beer to Jack and Coke, I was having a good time and enjoying the music. 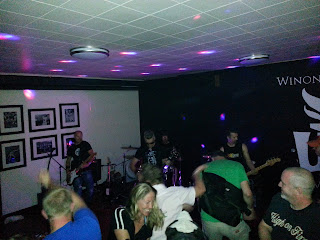 I mean, it was Drunk Cyclist time in the house and we were there to party. 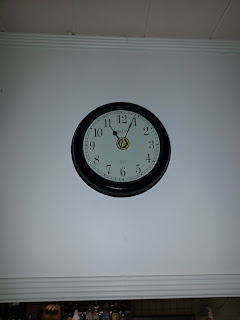 One of the oddest things I’ve ever seen took place at the party, and I still have no idea what it was.  There was a slice of tree on a table, and the locals took turns trying to hammer nails into it. 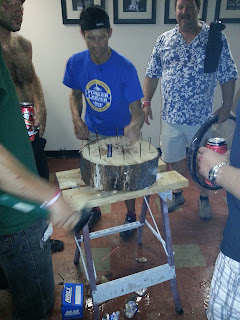 It must have something to do with being locked inside all winter and having nothing else to do.  The more they drank, the harder it was to hit the nails.  It was interesting at first, but then it got a little boring.

Well, until my man Dirty decided to try it with a full can of beer. 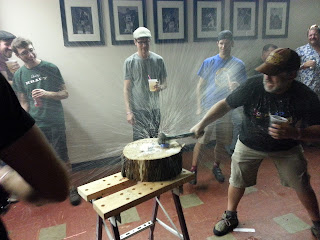 And he didn’t even spill of drop of his own drink.  Baller.

The band was finished, the bar was closing, and we eventually ended up out in the streets of the quiet little town of .  The Firecracker Salesman decided to unleash his arsenal, and the rest of us rode around annoying the piss outta the local college students. 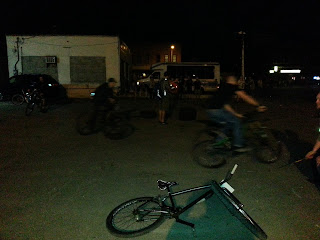 The grand finale was next.  A couple of shells were dropped into a pile of tires and we waited. 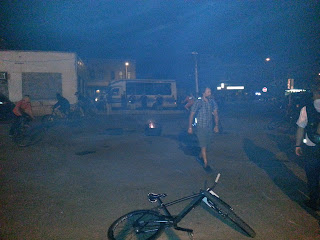 And that was it.  We left our mark on that little town.  Drunk Cyclist, 29nSNGL, and bunch of other single speeders from all over the country came in and showed that little town how to party.  The locals were even calling us “Sons of Anarchy”, which might have been funny if I watched TV enough to know what the hell they were talking about.

It was fun, but we had to go.  The next morning we would hit the road back towards .

That was another adventure, and tomorrow I’ll tell you all about it.
Posted by TheMutt at 8:49 AM