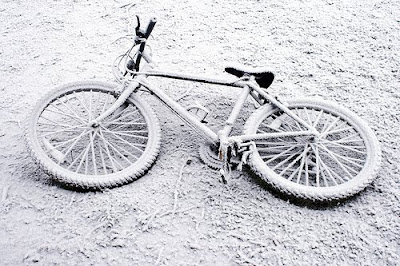 With no end in sight for the cold temperatures, I questioned my sanity in wanting to ride again on Sunday. I woke up early to find that all of our local trails were still open, but it was as cold as a polar bear’s ass outside. Where would I go? I briefly considered the U.S. National Whitewater Center, because it offers challenges not found anywhere around here, unless of course I drive to the mountains. I invited Little Miss Sunshine to ride, even offering to hit up North Meck in Huntersville, NC. She politely declined. Actually she said, “Are you CRAZY?” I guess it was too cold for her, even though she hails from somewhere near the Arctic Circle. I decided on something close by, the always fun Sherman Branch. I waited for Lunchbox to awaken from his teenage slumber to find that even he thought it was too cold. I thought for sure that he would want to go, especially since he received some extra warm riding gear for Christmas.


With no other crazy people in the house to take me up on my offer to ride, I loaded up the truck and headed to Sherman, Branch that is. Swimming pools, movie stars, no wait, that’s not right. I was going to a mountain bike trail. I grabbed even more cold weather gear and headed out the door.


When I hopped in the truck, I saw that the temps were just as unpleasant as the day before. My onboard temperature supercomputer gave me the lowdown: 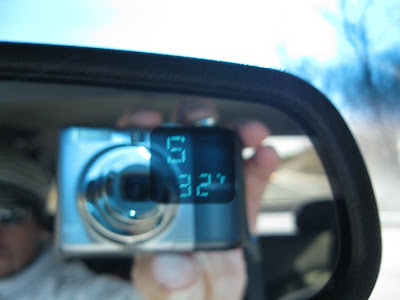 Great, another freezing day. At least I was prepared this time. I grabbed some items I normally reserve for the ski slopes: 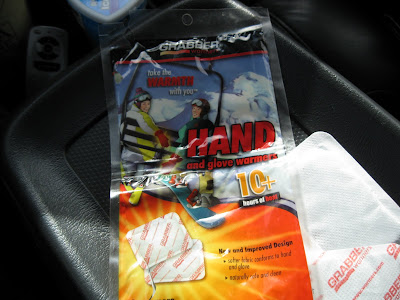 Now I would be ready. When I arrived at the trail, I slapped two of those bad boys in my gloves, and two in my shoes (between two pairs of socks.) While I was getting ready to ride, I ran into local race promoter extraordinaire, Neal Boyd, who had just finished his ride. After a brief chat about trail conditions, he was on his way. Before he left he said, “See you in two weeks!” Shit. Two weeks? He meant that the 2010 Winter Short Track Series was kicking off soon. I guess that meant that I should push it a little harder on the ride, because two weeks will be here before I know it. As I finished getting ready, I ran into a couple of guys I knew from the Summer Series.


They had just finished a lap, and their bikes were covered with mud. I asked about which part was the worst, and one of them replied, “All of it.” Well, I would press on anyway, since I needed this ride. The trail was open after all, so off I went.


They left a few minutes before me, and I saw them every once in a while. Those two are pretty fast, so I made it my goal to keep them in my sights, or even catch up with them. All went according to plan, even thought I had some issues keeping my traction. The trail had several frozen muddy spots, but it was definitely rideable. I kept my speed up as fast as I could, and I actually never went down. I came real close though. I was cold again, but not nearly as cold as I was the day before. I could tolerate the cold, but the mud was a different story.


After each mile, I could see the mud piling up on my frame and back wheel. It wasn’t the kind of mud that slings all over the place and gets you dirty, but rather the kind that gunks up your drivetrain. Good ole Goose still shifted fine though, but the miles were becoming increasingly difficult. By the time I hit the last mile, the mud was caked on so bad that the wheel hardly moved when I spun it by hand. When I finished the ride, here’s how it looked: 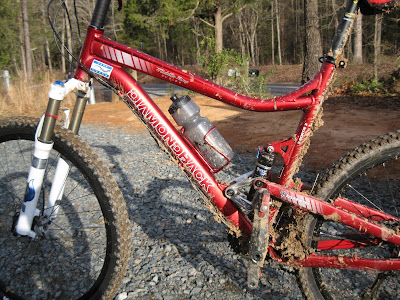 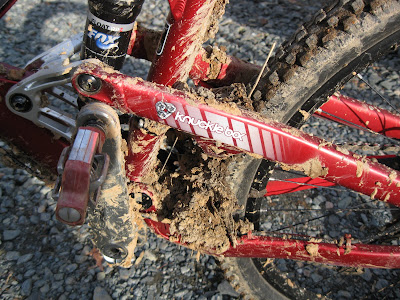 It was a great ride, and I had a lot of fun. My lungs even seemed to have recovered from the adventure I had the day before. I was happy that my “training ride” was successful. I never did catch those two guys though. Almost.
Posted by TheMutt at 9:02 AM

That looks fun. Was it really open?

Yes sir, it was really open. I would never poach on a closed trail. Well, maybe I would depending on the trail, but not Sherman. And yes, it was fun.