Every year around November, I get put on a buying hiatus.  I can’t purchase any presents for myself because Christmas is coming and it’s really hard for others to get me "things I want."  It's hard though, because I like to get my own shit.  I obey for the most part, but what do I do if I really need something? 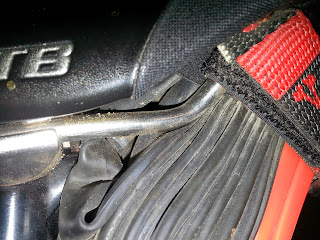 It might be kinda hard to see in the photo, but the rails are bent on my saddle.  This isn’t the first time that’s happened so I won’t blame it on the holidays.  It’s actually been like that for a month now, and it’s off just enough that I can feel it when I ride. 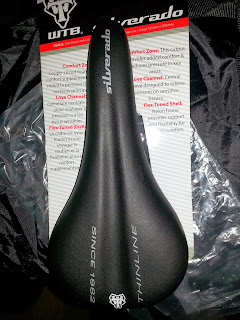 Yeah, I know.  Replace the one you broke with the same model?  Well, yeah.  I like those saddles.  In fact, it’s the only saddle that feels good on my bony ass.  I’ve been through a few over the years, but not enough to even think about switching to another brand.

In other news, it looks like I’ll get to ride twice in the same week.  Our weekly social ride is tonight, and if I’m lucky I’ll get out of work early enough to get in a lap before the group gets there.  This time of year it’s important to ride (for me, anyway) so I’ll take whatever I can get.

Short post today.  So what.  You’ve probably got Christmas shopping to do and all that.
Posted by TheMutt at 8:21 AM