Anyway, this could be called a race report.  I woke up yesterday morning with a strong desire to stay home.  I had such a shitty day the last time I raced that I wondered if I had it in me again.  Plus, I wasn’t really recovered from two laps in the heat with nothing to drink.  I know, who gives a shit.

I left the house and started thinking about my strategy on the ride up to in .  There were a few “fast” guys in a bigger than normal field. I figured that when I lined up I’d get my shit together.  My heart wasn’t in it at first, and that continued when we started the race.  I didn’t do my normal “sprint like hell and take the lead”, but I did get up somewhere near the front…

Until we hit that big ass hill. 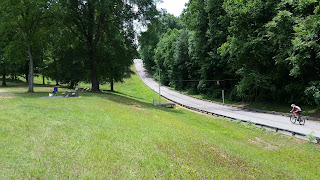 That hurt, and I suddenly realized that I wasn’t really ready for back to back weekends of racing.  As I hit the trail, the leaders sprinted away and I was left trying to find my legs and lungs.  We hit a downhill section and I recovered a bit, just in time to see a few people climbing the next hill fast.  I think I was sitting in sixth place but I was fading quickly.  One guy went buy on a climb and it turned into survival for me.  That’s no way to race.

The trail went up, down, up down.  I was getting bored and questioning my will to even keep it going. I didn’t mean for that race; I meant the entire rest of the season.  I had this internal struggle that I couldn’t explain.  All of a sudden though, I started feeling good.  I pushed it hard up a few climbs and recovered quickly.  Then we hit the technical section… 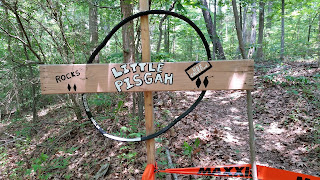 I’m not sure about the double black diamond designation, but it was nice to have something different.  Luckily I got a peek at this section pre-race (shout out to Jack H.) and I knew what to expect.  There were lots of rocks, which was a nice change from your run of the mill XC singletrack. 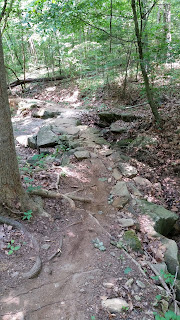 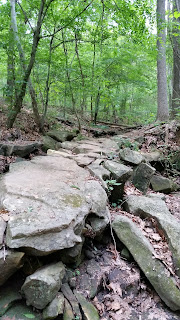 I breezed through it, cause I got skills (or luck.)  After that section I spotted a guy in my class, which was the carrot I needed to get my mojo back.  I made it my misson to catch him, no matter how long it took me.

I hit the last little section, passed through the start/finish line, and saw him up ahead.  After another trip up Derby Hill (with much less fatigue this time) I hit the singletrack with newfound energy.  I used less gears and stood up on the climbs, and after a few downhills I found myself nearly running over the guy I was trying to catch.  Rather than make my move then, I decided to ride behind him a while to wear him down.

It worked, because on the next set of big climbs I mashed away while he struggled.  I passed him and did my best to put a huge gap between us.  Suddenly I was racing again, and actually felt like I belonged out there.  It was too late to catch up the the Cat 1 guys, but I gave it everything I had and felt much better about myself.  I cleared the “Little Pisgah” section again without incident and, knowing that I was getting close to the end, gave it everything I had left.  I crossed the finish line nowhere near the podium, but feeling good about the effort I gave.

It’s not supposed to be easy.  But, it’s supposed to be fun.  I didn’t think I would be able to do this entire series again and have fun.  That happened in the past.

I won’t let it happen again.
Posted by TheMutt at 7:25 AM