Well. Another weekend of racing. I had family in town the three days prior to yesterday, and we stayed so busy that it wore me out. Beer drinking, wine tasting, and walking all over the place does not a good race make.

Of course I felt tired and sluggish when I woke up and started down the road to Spartanburg, SC... 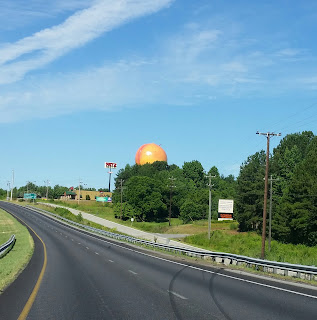 But on the way I started to feel peachy.  Ha.

I left a little later than I wanted, which gave me little time to sign in and warm up  (and of course shoot the shit with everyone I saw.)  We lined up, and before we took of we were laughing and joking around. My plan was to take it easy and see how I felt. When we started I did just that.

I ended up in third and we weren't setting a fast pace. The group stayed together for a while, until the three of us started pulling away. About two miles later, first and second pulled away.  I kept my pace to control my heart rate, and tried my best not to lose a spot.

The trail wast fast, and with only a few roots and no features I was just zooming along. The first lap was pretty uneventful until I came out on the road heading for the start/finish line...

I spotted second place heading out for lap two.  Now I had a reason to pick up the pace.  I sprinted to get back out on the course but he was long gone.  I no longer felt tired at least and was able to keep my effort high.  About three miles later I ran up on him but he didn't try to get away.  That was good except that I didn't have it in me to pass.

I was getting tired of slowing down and made a plan to pass.  I was taking the climbs better so the plan was to pass him on the next one.  Just as I made my move, he fell over. I slowed in the middle of the climb and asked if was okay.

He was.  That was good because I wouldn't feel right passing him if he was hurt.

I pushed hard, trying to build a big gap.  He would disappear and reappear, trying hard to keep my pace.  I pushed harder when my legs and lungs would let me. When I saw a familiar sight  (the last section) I gunned it. It was longer than I remembered. I started fading and wondered if I would even make it out of the woods.

Just then I popped out on the fire road and put the hammer down one last time.
I finished second. 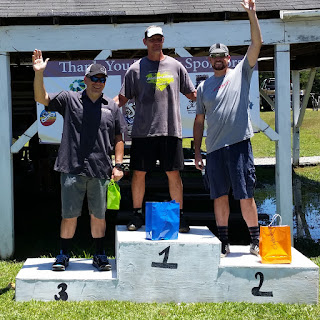 It was a hard effort, and a tough race. I left it all out there and came away with a spot on the box.  I was happy.

And yeah, I actually had fun too.
Posted by TheMutt at 9:01 AM