That race I did Sunday.  I was on lap two and figured that I had plenty of time to move up.  It was hot but I was plenty hydrated.  I felt good (legs and lungs anyway), but mentally I knew I had some work to do.  The only thing on my mind though was the fact that I had to do two more laps on a not so fun trail.

Well, I guess it was fun but my state of mind was wrong.  Suddenly, I remember what my friend told me about making sure to have fun when I raced and I realized that I could.  I started hitting every little jump and bump to catch some air, and taking the turns as fast as I could.

I even got all Enduro™… 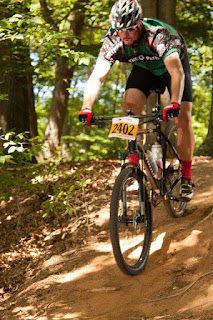 I don’t know who took this photo.  I found it on The Internets.  Sorry, but thanks to whomever it was.

Anyway, I was having fun, and stopped worrying about whether or not I caught anyone else.  I passed a guy (not in my class) and got passed by a few (also not in my class.)  I was working hard, but no longer feeling like racing was a chore.  Lap three was more of the same.

I finally finished, and felt good about myself.  I think I was in 8th place or something like that, which is okay considering the wheel issue I guess.  As far as the overall standings go, I might still be good.  I finished ahead of one guy who’s ahead of me overall, and with a few races left I have time to make some upward movement.

The main thing is, I really did have fun.  The course was actually pretty good, and the event was well organized.  I really can’t complain, even if I wanted to.

With a long “season” and series, it’s easy to get down.  I can’t be on my “A” game every time I hop on my bike and I’ve learned to accept that.  When it’s all said and done, maybe I’ll finish in the top three overall.  If not, hopefully I’ll at least come away feeling like I had a great time.

Only time will tell…
Posted by TheMutt at 8:34 AM