So, back to the Mulberry Gap weekend.  We took off in one big group, heading up the five mile climb to the top o’ the mountain. 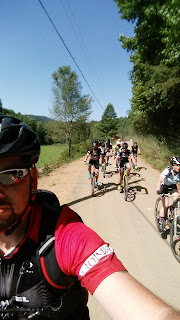 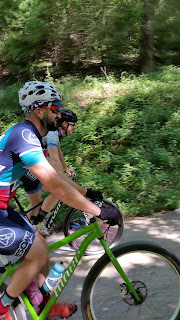 After a little bit I mentioned to him that we probably shouldn’t be keeping that kind of pace on a climb and he agreed.  Just as the conversation starting getting into why there will be no Wilkes 100k this year, the climb got steeper…

And I dropped off.

A few of us did as a matter of fact.  After a week of muscle relaxers and relaxing my muscles (i.e. sitting on my ass not riding a bike), all that climbing caught up to me.  It didn’t matter though, since Niner Mike made sure that no one got left behind.  It was a fun group ride after all.

Eventually we made it up to the lookout. 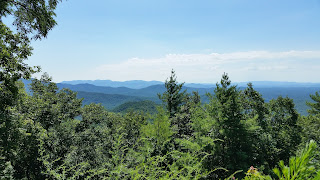 That view was definitely worth it, and the best part was that we were gonna start going downhill.  My legs were unresponsive at that point, so going downhill was a much needed break.  The descents were so awesome that I didn’t stop to take photos (probably a first for me), but luckily someone did when we stopped at one point to regroup. 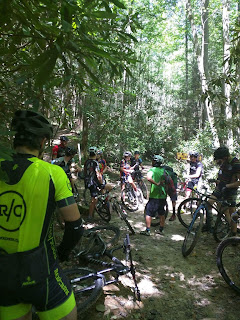 I flew through the descents like I was a pro or some shit like that.  In fact, I had no idea I could ride that stuff so well.  It was more about the bike I guess, with my Niner ROS9 with a drooper post doing most of the work.  There were a few climbs here and there but we rode mostly downhill back to the finish of our big loop.

The trail was quite rad.  Not quite as technical as The Pisgah, but technical enough to make you feel like you were actually riding in the mountains instead of some cross country dirt roadie track.  There were rocks, roots, jumps, creek crossing, and a shitload of blind turns.  I was going so fast that I almost peed a little.  That kind of fear on a bike is fun.

After the ride we gathered up in the barn before dinner.  We were socializing, and I took the opportunity to present Niner Chris (not me, the man in charge) with a gift that was handmade by Little Miss Sunshine.  She put her artistic ability and welding talent to good use to make him a one of a kind gift. 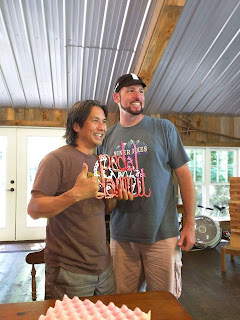 We met him at Interbike two years ago, and he make such an impression on her that she felt like making a gift for him.  She makes all kinds of art projects out of recycled bike parts (you already know this), and this custom piece is a fine example.  And in case you can’t really read it, it says, “Pedal Damn It.”

What an amazing weekend.  I had high hopes for Mulberry Gap and I was not disappointed.  Amazing riding, awesome people, and a nice getaway from reality.  Well, as one of my new friends put it over the weekend, “This is reality.  Not that other stuff.”

So this bullshit I do every day from 8 to 5 isn’t reality.  It’s just a means to an end.  I just work so I can go outside and play with my toys when I have free time. 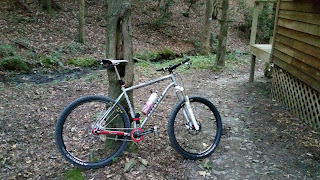 Really expensive but fun toys.
Posted by TheMutt at 9:18 AM