One For The Road

Lunchbox and I are currently on vacation. 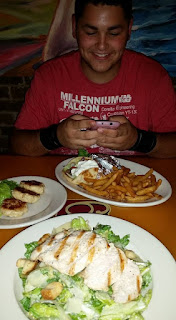 That kid sure can eat.

Anyway, I figured since yesterday was race day that I should at least post one update. So here I am.  You know that.  But yesterday I was at The Sizzler in Greensboro, the last race in the 2015 Southern Classic Series.  The kid and I left the house early and headed north.  I figured that since I sorta had 1st place overall locked up that I didn't need to work that hard in the last race.  While we all gathered around waiting to start though, they started doing call ups.  That's something I've never expereienced so it made me have good feelz.  When they called me up as the leader of the series, I thought that maybe I should put in a little effort.  A few minutes later, we took off. 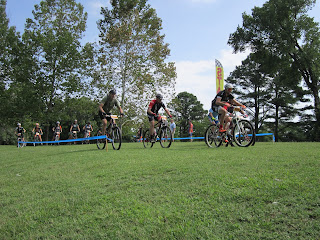 I resisted the urge to take off fast at first.  The pace wasn't blistering, so I stayed up front and hit the trail in 2nd place.  Then, the climbing started.  Not being on my bike since my trip to Mulberry Gap last weekend really hurt my fitness and I immediately began to suffer.  I let one guy by and dug in, hoping that I had enough to finish the race.  I pushed as hard as my tired body would let me and kept 1st and 2nd place in sight.  We stayed together for a while but I just couldn't keep it up. I was hurting, and wondered how many more places I would lose before the day was over. Towards the end of the first lap I dropped one of my water bottles.  I was in trouble.  Eventually I came through the start/finish line and notified Lunchbox that I lost one of my bottles.  I passed through and headed back out for more. 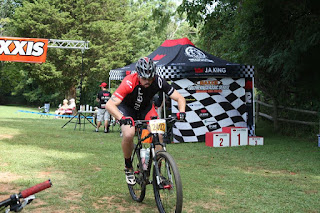 Lap two and I was feeling a little better.  I was attacking on the climbs, and giving it everything on the flat stuff.  I knew for sure that I would catch up to the leaders.  I was moving fast, but I didn't see anyone ahead of me.  I kept thinking about that damn water bottle (that I would no doubt need later) and it was screwing with my head.  Just then, one particular section seemed familiar to me so I started looking for it.  Magically, it was sitting upright on the side of the trail.  I stopped to pick it up, knowing that it would hurt my chances to catch anyone ahead of me.

I passed through the start/finish line and tried to make up for lost time on the third and final lap. I was moving quickly, hanging on to the hope that the two guys up front were wearing down.  That lap went by much quicker, and when I hit the grassy field I gunned it towards the finish line.

I held on to third place. 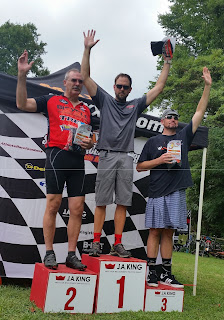 That podium spot definitely secured my place in the series lead.  Right after that photo, I got called up again...

to stand on the top step. 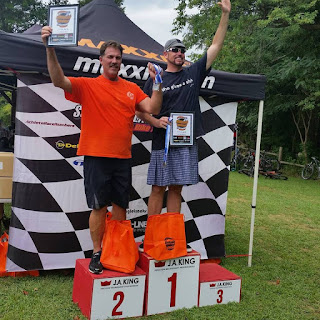 It was a good day.  I had a blast racing the whole series, and actually I'm excited to do it again next year.  Srsly.  I worked hard and had fun, and with a little luck had some success this year.  I guess I should start looking at some other events to do before the year is over.

Now if you will excuse me, I'm off to my vacation.

See y'all next week sometime.