Well, I’m back.  After lots of planning, our long vacation was over before I knew it.  I hate when that happens.  I guess that’s why you should stop to enjoy what you’re actually doing every once in a while.  It started with a race, some driving, some sightseeing, moar driving, some riding…


Since I mentioned a race (and I have lots to talk about), I’ll start there.


The 2016 Southern Classic Series kicked off down near Sumter, SC the Sunday before last, and conveniently it was on our way to Florida.  I worried the day before about which bike to bring (geared or single speed.)  I would pull one bike down, look at it, put it up, get another one down, and repeat.  Having never ridden anything down there, I couldn’t make up my mind.  I eventually said, “Who gives a shit” and decided to race Darth Maul, my rigid single speed.  I heard that it was sorta flat down there with a few climbs.  I needed to suffer to start the season right, so I knew I made the right decision.


Because we were leaving for an extended vacation, we had to get up extra early to load everything up in my truck.  It was along drive so early in the morning, but I made it with plenty of time to pick up my race number and get warmed up. 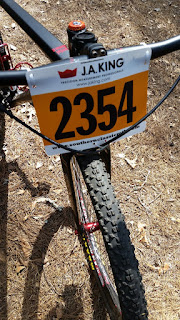 When everyone started lining up, I got the familiar pre race jitters.  I tried to calm myself down, saying that I was just there to ride (sorta fast) and see what happens.  I was the only one in my class with just one gear, so I told myself that I wouldn’t take off fast to get up front.


When the race started, everyone took off (it was a big class too.)  I had trouble clipping in my left foot, but I got in as the group started picking up speed.  I started spinning fast, and before I knew it I was in second place right on the leader’s wheel.  I felt pretty good, so I kept that pace.  We starting putting a big gap on the rest of the group.  “Holy shit.  Maybe I’m in better shape than I thought” I said to myself.


The trail was wide open for the most part, but pretty flat.  All that fast spinning was getting to me though, and about a third of the way into the first lap I started slowing down.  One guy caught up and passed me.  Then another.  Eventually I was down to sixth place.  I took it easy, and with no one in sight behind me I decided to try to recover to see if I could catch back up.


The course was two twelve mile laps.  At full speed (and spinning) it was tiring.  There were a few climbs here and there, and they gave me momentum.  One climb in particular was really steep, but I powered through it pretty well.  It was towards the end of lap one, so I started getting myself ready for the big comeback.  I passed through the start/finish line, neglected to grab a full bottle of Nuun from Little Miss Sunshine, and sped through the beginning of the second lap to catch the lead group.  Soon after entering the woods, I started catching up to and passing people.  A few were in my class.  After counting those that had started in my group, I realized that I had worked my way back into third place.  “Hmm, podium chance” I thought.


But all that damn spinning was wearing me out again.  Instead of putting a gap on everyone behind me on the climbs this time, my legs were too tired to mash properly.  I pushed harder, but that only made it worse.  When it flattened out, one guy passed me again.  This time, for good.


Fourth place.  Not bad I guess.  Except that I still had a long way to go and I was out of water.  I was able to keep a decent pace on the flat stuff again but I was slowing down on the climbs.  No one was behind me though, and I saw third and second place up ahead when the trail got all twisty.


And then that big ass hill showed up again.


There was a crowd at the bottom doing a little heckling, and although they were doing a fine job (and helped tremendously on the first lap) I was struggling.  I got about three quarters of the way up and my legs locked up.  I was in excruciating pain and I couldn’t move.  Not sitting, no walking the rest of the way, no nothing.  I watched as two more guys passed by.  There was nothing I could do.


As the pain slowly started to subside, I shuffled my feet (still couldn’t bend my legs) to get moving towards the top.  I managed to grab my leg to get off of the bike, and slowly started stretching.  Once I got loose enough to bend my knees, I hopped back on my bike before my body knew what I was doing.  The last part was relatively flat, so I spun like crazy to get that shit over with.  I crossed a small bridge, and got behind a guy that had just passed me.


I obliged, even though he could’ve easily outpedaled me to the finish with his many gears.  I crossed the line in 5th place I think, but more importantly, I wasn’t last, didn’t die, etc.


And I looked pretty damn good. 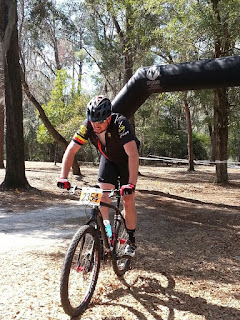 No team kit because no team wants me, so I’m still my own team. Who gives a shit.


Our friends from the Lowcountry showed up to ride after the race, so we shot the shit with them for a while so I could “recover.”  I damn sure wasn’t ready for the season to start, but I was ready for a vacation.


A few hours (and miles) later, the little lady and I ended up in Saint Augustine, having some good food and beer at a local watering hole. 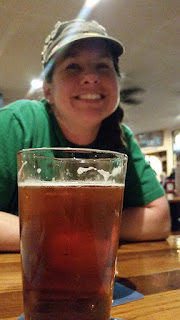 If you’re ever down there, check out the Sunset Grille.  It’s so awesome.


We spent the rest of the evening relaxing and planning our next move.  It was gonna be a long week and we were ready.


Are you?  Good, because I haz lots more tomorrow.