I missed yesterday.  No one is paying me for this stuff (thankfully.)  I may get into the reasons tomorrow, or maybe I won't.  Who gives a shit.

I really took it easy over the weekend.  It was the series finale for the winter short track, but I didn't bring the party.  With the rest of my heckling crew either out of town or sick, I decided to just bring my buddy Carl out for the day. 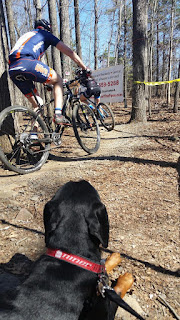 With no party responsibilities, it was nice to have my pal with me.  The only thing close we got to heckling was a wee bit of creepy baby hand action. 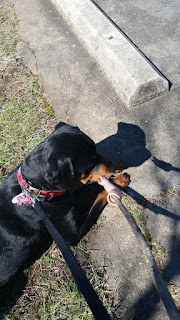 I did get a little shit from some of the racers for not bringing the party, but that's how it goes sometimes.  Also, in my quest to be what's wrong with this sport, I heard quite a few comments like:

"We need you out there!"

That was nice to hear.

I stayed out there a while, and it was nice to hang out with friends.  They all love Carl.  He loves the attention.  And I loved a nice, relaxing day with good weather.

Back on the home front, I guess I should mention that it was also Anniversary Day for me and Little Miss Sunshine.  She encouraged me to get out of the house for the day (She was on call for work), but that didn't stop me from celebrating.

I cracked open one of my home brews that had been aging for over a year. 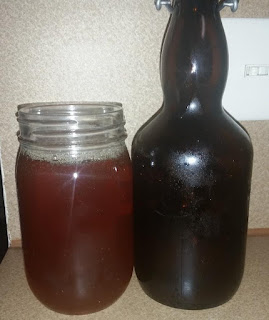 Okay, I kid.  Although I did open that beer (and drink it), that's not how we celebrated.  We're actually taking a big trip next week (like we do every year.)  We don't give each other fancy gifts and go out for expensive dinners.  That's just stupid (for us anyway.)  We just have fun together, and gift giving for this occasion is discouraged.  But, that didn't stop me from giving her one anyway. 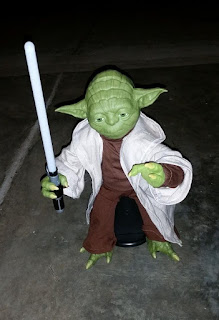 Yes, we love Star Wars.  And no, it's not the same size as her (only slightly smaller.)  Little Yoda there will train you to use The Force, and bestow wisdom upon you like only a tiny little Jedi Master can.  It's actually pretty rad how he moves around with his lightsaber flailing about.

Carl hates it though. 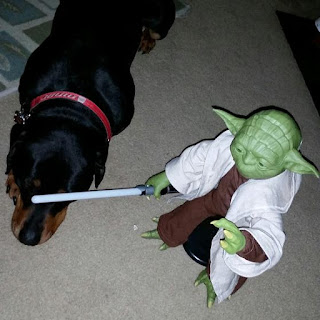 Meh.  It's what we do.  We've been through a lot of good and bad over the years, and we try to keep this thing going any way we can.  Mostly that's done by having fun, since everyday life can stress you the hell out.

So what if we're a couple of Star Wars nerds.  It's what we do.

See y'all tomorrow I guess.
Posted by TheMutt at 8:32 AM