One ride wasn't enough.  I had to do it again.  And even though I struggled with my first ride back, I got a taste of happiness and wanted more.  Only four miles nearly killed my legs and lungs, so why not tack on moar miles?

I grabbed the skinny tire bike this time for some roadie action.  I figured it would be easier to cover a longer distance, and maybe a little easier on my sore ribs. 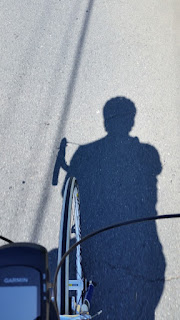 You know, so I can ride with one hand and take pictures with the other.

Before you give me shit, I wasn't being serious roadie.  I just wanted to get out and pedal on a really awesome day.  I mean, real roadie douchebags don't wear baggie shorts. 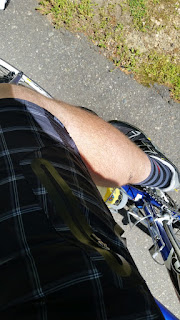 Just douchebags like me trying to ruin the sport.

Anyway, I had a short route planned on some local roads.  Most of the time they're safe around here because of bike lanes. 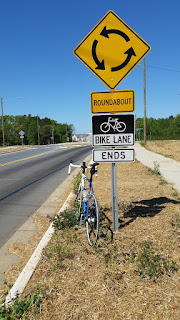 But there is a shitload of construction going on, which means the bike lane ends when it never really existed. 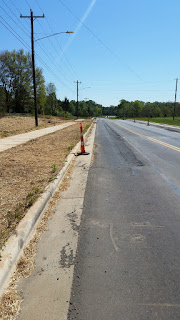 It wasn't just bike lanes though.  The road construction/temporary road repairs made the ride bumpy at 125 p.s.i. which meant pain.  I'd almost forgotten that my wrist was still sprained, and the bumps were none too kind on the ribs either.  That made me long for the days when I had my own, private road that was brand new (i.e. smooth) concrete. 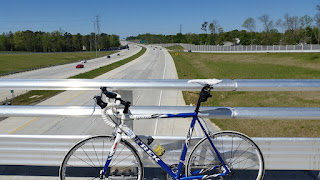 I don't mean to complain.  I was enjoying my time on the bike.  I just wanted to get onto some smoother surfaces and away from traffic.  I high-tailed it over to the local greenway, where things were moar better. 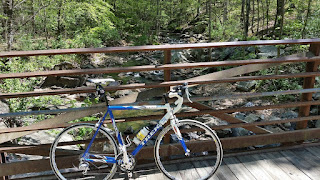 That was the best part.  You know, being on the bike again.  I was happy, and I waved and smiled at everyone I passed out there (opposite direction of course.)  And other than my injuries, I felt better physically too.  Eventually I wandered my way back home, where I could enjoy a nice reward for my effort. 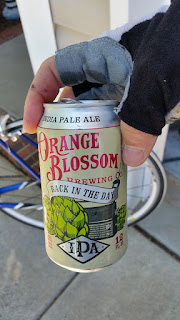 I'm still gonna hurt for a while, but at least I can pedal a little bit to keep from going batshit crazy.