I love riding bikes.  It's mostly what I do in life these days.  With two ribs still on the mend, I'm really trying to keep from overdoing it by getting on the trail too soon.  Sure, the doctor said I can ride "when I'm ready."  However, I know that if I rush this shit I'll take much longer to recover.  My goal was to stay off the trails for at least six weeks, doing nothing but road and urban rides until I was completely healed.

Well, I'm a victim of my own stupidity and sweet singletrack in close proximity to my residence.

On my urban ride, I somehow ventured onto the gravel part of the greenway because I thought I was feeling up to it.  Along the way I remembered that one of the best trails around, RTS, was right under my nose. 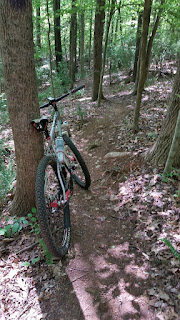 The bumps were minimal at first, but riding a single speed hurt me some.  Having to stand up to climb (and pull up on the handlebars) put quite a strain on my ribs.  I dealt with it because it was fun.

The trail isn't too rooty, and I'd gotten a little used to the pain while climbing.  And then... 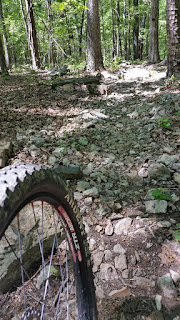 Who gives a shit.  It was too late to turn back.  The joy of singletrack helped me forget the hurt.  I hit more rocks. 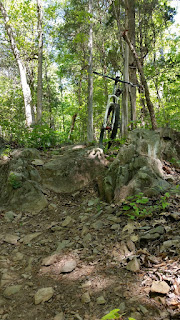 Fun.  Srsly.  I was outside, on my bike, in nature, enjoying a sweet trail close to home.  I said nature, right?  Look at this tree... 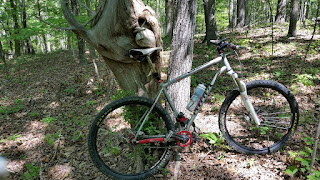 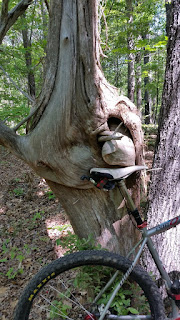 It was an awesome time.  Almost like I'd never been off the bike.  It was just like Beggar's Canyon back home. 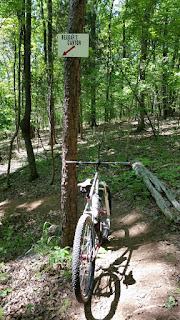 Star Wars reference because I can.

Mentally, it was great to be back in the (real) saddle again.  Physically?  Well...

I may have a little bit of a setback.  We'll see.