I skipped yesterday not because of my extended bouts of laziness, but because I was le tired.  I "worked" again all weekend, and this time it involved a road trip. 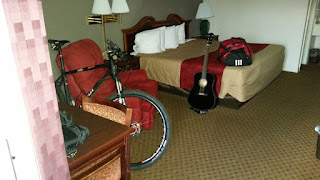 From the photo above, it's probably pretty obvious that I'm not talking about working at my real job.  Yes folks, I worked another race for the North Carolina Interscholastic Cycling League.  This race was held in Mayodan, NC and to be honest, I had no idea where that was (even after looking on a map.)  I figured that a trail in a park in the middle of nowhere would not be much fun, but my attitude change when I rolled up to Farris Memorial Park. 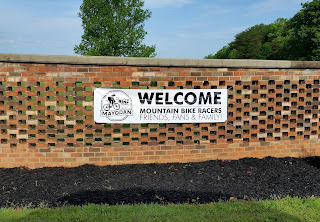 The town of Mayodan really pulled out all the stops and welcomed our league with open arms.  There were signs/bike decorations all over town, and I have to say that I've never felt more welcome at any race...ever.  And the park I thought would be full of nothing was full of decorations too. 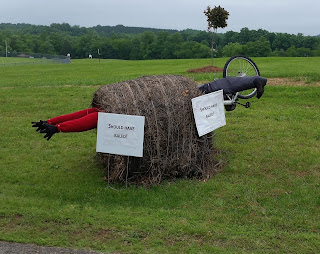 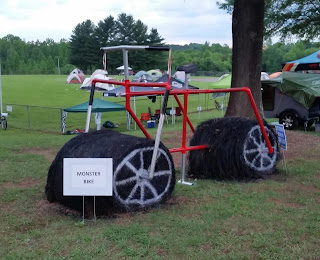 I was amazed at this place.  For such a small town, this park had it all.  Standard ball sports stuff, a gold driving range, mountain bike trails (of course), paddle boats, fishing, and even a mini golf course. 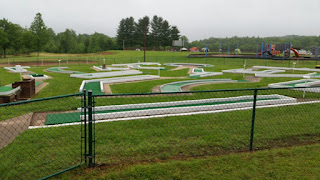 The league staff gathered around and broke off to start setting up.  The infield of the course was amazing, looking so pro that I almost forgot that this was for high school and middle school students. 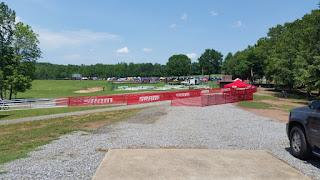 And the trails.  Wow.  I had low expectations, but I was blown away.  The trails are machine built (which means fast and flowy), but they made use of the terrain and included lots of features.  I mean, there were tons of rock gardens.  It was awesome.

I rode the course several times, since we had to set it up for the racers.  It was hard work but I had a blast. 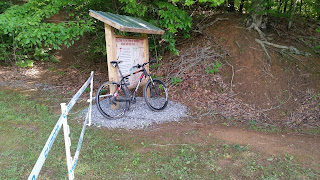 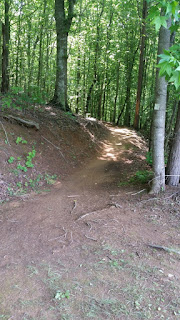 It was super hot outside and we worked hard, but the course was ready to go for the next day.  I chilled out at the park well into the night, playing guitar and enjoying the atmosphere.  It was late and I was tired, so I headed back to my hotel just as the storms were rolling in.

The next morning I was up at 6:00 a.m.  I hit the road a short while later, and the skies looked less than ideal for a kids mountain bike race. 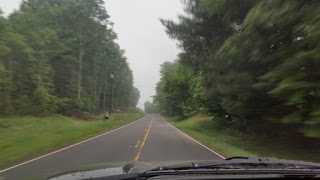 The rain mostly held off though, wetting the course just a bit.  At least the weather was cooler though.  Anyway, after checking the course again and getting everyone ready to go, the first wave of racers lined up to start their race.

I've seen it before at our other races, but I'm still pretty moved by it. 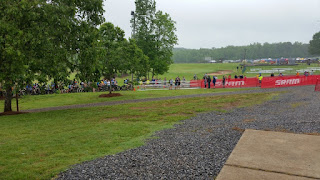 It was an amazing weekend.  The kids had a good time, and I'm pretty sure every single one of them loved the course (I asked as many as I could.)  The Mayor of Mayodan and other important town-folk were there too, and they seemed just as excited as we were.  We're doing a great thing here for these middle and high school athletes, and even though it wore me out I was feeling really happy.

I'm "retired" now from racing, but that doesn't matter.  This feeling is better than anything I had when I did this stuff just for myself.

Funny how that works.

Special thanks to the town of Mayodan and Rockingham County for making us feel welcome and working with us to make this a successful event.

I can't wait for the next race in less than two weeks.
Posted by TheMutt at 8:32 AM