So, now that you know why I've been doing the amateur homeless person thing, I can start getting into more of the specifics.  My friend James from down in South Carolina does the bikepacking thing quite regularly, so I've been hitting him up with random questions and soliciting advice for things that I hadn't figured out on my own.

Spoiler alert, I usually make my own decisions and then tell him what I'm planning to do.

One thing I didn't really think about for the whole "suffer across Florida thing" was the camping aspect of it.  I've been camping quite a bit, and I've even used my hammock sometimes.  For the Big Florida Bike Death, I figured all I would have to do was ride a bunch and build up to some crazy mileage... and camp at night.  Easy AF.

Then James hits me with, "You need to do some overnights."

For some reason, that clicked and I didn't even question it.  I mean it makes sense to practice for the way I would be riding down there but that wasn't really what I was thinking.  What I really needed was to see how my body would react to riding all day, sleeping in a hammock, and trying to ride again the next day.  Doing back to back rides from my house after sleeping in my comfy bed wasn't going to cut it.  I needed to really camp.

Since my last long ride was out to Crowders Mountain, I figured that would be a good route to do again (but camp in between of course.)  I didn't want to have my sleep interrupted by camping someplace I shouldn't though so I looked for a campsite to reserve (for safety or some shit.)  The weekend I had planned didn't have anything available.  I looked at nearby Kings Mountain State Park in South Carolina, because the smart guy I am said I could add some extra miles no problem.  Well, they were all booked up too.

I found another campsite here in Charlotte (at the McDowell Nature Preserve) that fit the bill, except that it was only a twenty mile bike ride away.  I really needed to ride a much longer distance that would test my body and camping setup so I had to come up with a plan.  I started looking at some of my past routes and got slightly creative.  I figured I could just ride a really long distance the first day, camp, then ride the twenty plus miles home the next day.  It wouldn't be a death march for day two but at least it would be a big enough ride to see what kind of toll riding the day before and sleeping in a hammock would take.  I reserved my spot and planned my route.

I knew it wouldn't take all day to ride the forty five miles I had planned for day one, so I left around noon.  The heat of the day would add to my suffering and could be beneficial to my "training."  It was still summer when I did this (last month), so it was plenty hot.  I meandered along my route and made it to Gaston County...

Even though I end up on the road quite a bit, I'm getting really good at finding shit off the beaten path.  The combination of roads and not so roads will be similar to Florida anyway, so it's all good.  Anyway, I finally made my way back to the little greenway over there and took it to the end.

Then, more roads.  At least I manage to find lightly traveled roads, and it's not like I'm taking the most direct route anyway.  A couple of hours in I decided that food was required.  I carry some snack stuff with me, but in Florida I will be "living off the land", which means stopping at commercial establishments is okay.  Piss poor planning at this point in my journey (I was sort of in the middle of nowhere) left me with two options... Random Mexican Restaurant or Subway.  Usually Mexican food and bikes pair well together, but that would be a shitty idea for a bikepacking trip.  Pun intended of course.

They also sell water and that popular sports drink, and as you can see I stocked up.  I still had a long way to go but plenty of time.  With a full belly I pedaled through the southernmost part of the county looking for anything to keep me motivated.

And then I finally did see something that kept me going, but ironically I had to stop to get a picture of it.

I crossed into South Carolina, and at this point my superior Google Maps scouting led me to some more off the beaten path type stuff.

I may or may not have been trespassing.  I'm not sure.  I didn't see any signs so it's okay.  Well, except this sign...

After I popped out of the woods I was in "civilization."  And let me tell you, it sucked.  I was in the Lake Wylie area and it's busy AF down there.  Drunk boaters driving all over the place looking for post-lake food would normally make for a dangerous situation for some dude riding a bike piled full of bags of things.  Luckily there were sidewalks to keep me safe.  I tried to quickly get through that mess, but not before grabbing some provisions for the night.

All stocked up, I grabbed a picture of the lake and saw the woods where I would be staying.

One big final climb and I made it to my destination. 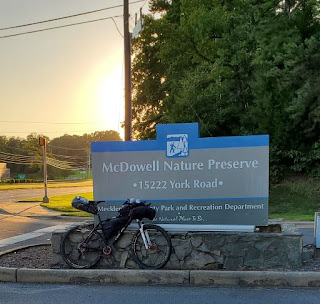 Riding into the park, I felt a little sense of accomplishment.  I had to stop at the gate to check in, and the lady there said, "Where is your car?"

"From where?" she asked.

She just kind of shook her head and walked away.  It was a boring conversation anyway, and I needed to get my camp setup before dark.  It didn't take long before I had a home for the night.

I felt pretty good but I was tired.  I'd ridden a little over forty five miles and I was hot, sweaty, and hungry.  I cleaned myself up (wet wipes are awesome), ate some food, and just relaxed in my hammock hoping to fall asleep.

That would prove to be more difficult than I thought...