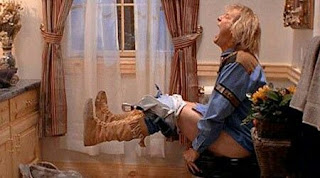 I attempted to get back to blogging a while back and stopped again.  No excuse.  I'm just plain lazy and forgetful.  I'm really trying, Ringo.

So let's just jump right in.  I've been pretty regular on the social medias during my hiatus at least, posting pictures of rides I've been doing.  And yes, I've been riding...  a lot.  Those that follow along know that I've changed things up a bit but only a few know exactly why.  I have some big shit planned (coming up in a few months), but there is a reason why I started planning this big shit.  And not just so I could write the work "shit" repeatedly.  Shit.  Uh, I mean, who gives a shit.

I always used to say, "I ride all kinds of bikes, but I'm primarily a mountain biker."  I said that shit like it meant something special.  And it did (to me), at the time.  I loved riding in the woods on trails more than any other kind of bicycle riding. 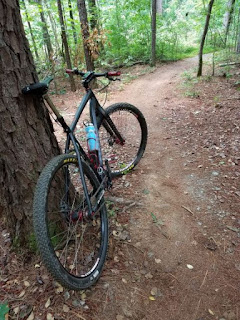 Noticed I said "loved."  I somehow got into a funk and just got burned out on the whole scene.  Local trails were boring to me.  Mostly because everything is pretty much the same nowadays (with few exceptions.)  People want that fast, smooth, and "flowy" shit, so everything you see is just that.  But it's boring.  I like that stuff sometimes, but when that's all everyone wants to ride (and build) it gets old really quick.  And I really don't get it either.  Most folks I see are riding full suspension machines built for them thar hills because they are "comfortable", but my full rigid singlespeed is just as comfortable to me.  I enjoy suffering though.  I'm also an idiot.

And that's the other thing.  Everyone keeps jumping onto the next "new thing", trying to play keep up in a game that's designed (by bike industry people) not to be won.  And honestly, it's not just prevalent in the bike world.  People do that all the time in everyday life.  Some may call it clever marketing, but I think people are just sheep and want what everyone else tells them they should want.  I'm no innovator or trendsetter by any means, which I guess explains why I don't feel the need to stay with the times.  But if this shit keeps up, everyone will be riding electric bikes on paved paths and pump tracks, comparing Strava times likes it's an old fashioned dick measuring contest.  No, thank you.

Anyway, this is not a rant and this is just like, my opinion , man.  I made the conscious decision to do my own thing, because trying to do what everyone else does is just so exhausting.  Racing was fun for me when I did it, and sure, I miss riding with most of my bike friends.  But while they are worried about their PRs and how much travel that new bike they saw has, I just want to go on adventures.  That's really what this is all about...

Adventure.  I yearned for it.

When I was a kid I rode my bike everywhere and is was always an adventure.  When I started riding again as an adult, I was able to capture that feeling of adventure again.  Eventually, I started being like everyone else and didn't even notice that feeling was gone.  But when I was stuck in a job that kept me traveling all the time, I managed to find some adventures every time I went to a new city.  Unfortunately, that turned out to be the only time I was able to ride.  Once I was free from traveling for work, I decided I would try to do more adventure riding.

It started with the road bike, mostly because loading a bike on my truck, driving to a trail, and riding in circles didn't seem like much of an adventure to me.  But the road wasn't really doing it for me.  I wanted more, and I definitely missed being off road. A buddy of mine told me about a shortcut to the trails near my house, so I started exploring that area.  Those boring (I've ridden them a bunch over the years) trails became fun again, because of how I got to them.  Not having a predefined path to ride was exciting... 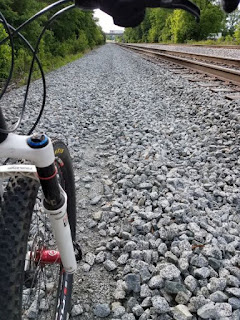 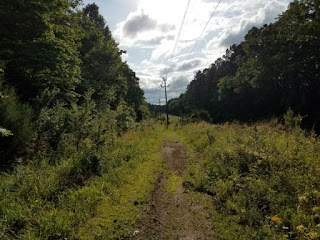 I started doing that for a while, and the destination didn't even matter anymore.  I was having adventures in the woods, instead of trying to see how fast I could finish a particular trail.  Then it dawned on me...

Is this what those bikepacking people do?  I wasn't sure since I had never really paid much attention to it before.  I thought it was just another form of gravel grinding, i.e. dirt roadie shit.  Maybe it was, but it was starting to look fun to me.  It was riding a bike, and bikes are supposed to be fun.  I needed to find my fun again...

Could this be it?

Just like everything else I do, I jumped right in.  I did a little research, made some ridiculous plans (more on that later), and even asked one friend who I knew had some great knowledge about bikepacking (shoutout as promised to James.)  I took a bike that hasn't seen much use since I stopped racing, and starting putting some bags on it. 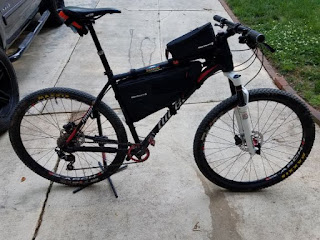 What was I supposed to put in those bags?  I had no idea.  I just knew I needed bags.  Then I started planning rides.  Hours of staring at Google Maps, local knowledge, and a little luck allowed me to find some cool(ish) routes.  I hit paved roads, gravel, powerline cuts, and singletrack.  And even some bushwhacking for good measure.  Riding bikes was fun again. 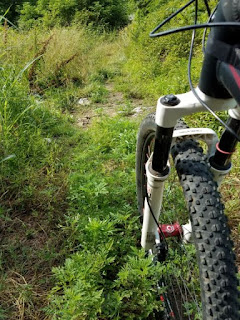 This was a dramatic change for me.  I had been in a funk and bikes just weren't as fun as they once were.  I remember being on a trail, even riding with friends, wishing we would hurry TF up and get to the end.  I was never in the moment, instead just going through the motions.  Once I started these new little adventures though, hours would pass before I would realize that I was tired and probably should start heading home.  It was a huge difference for sure.

And it was only the beginning.
Posted by TheMutt at 8:18 AM