When I left off yesterday, I was settled into my hammock for the night.  The ride to the campsite that day was hot.  Real hot.  It wasn't really an issue since I like the heat.  Once I was setup for the night I did everything I could to cool off though, which mostly consisted of drinking fluids and a wonderful wet wipe whore bath.  I was comfortable in my hammock for sure.  Even though it had been hot all day, once the sun went down the temperature was quite pleasant.

My setup was pretty simple.  I had my hammock with the rain fly over it.  There was a zero percent chance of rain, but I wanted to set it up anyway for "practice" since I know that December in Florida can be wet and I will most likely need cover down there.  I had a little inflatable pillow that packs away small and is very comfortable.  It wasn't supposed to be too cool that night so I had no sleeping bag, instead packing a couple of those emergency space blankets in case of you know, emergencies.  Besides, at this point the only sleeping bag I owned is a big bulky one that I got in the Army sometime back in the 90s.  Not ideal to pack on a bicycle at all.  And other than some fleece pants and a t-shirt that I wore as pajamas, that was it.  I figured I'd be good.

I was tired from being out on the bike in the hot sun all day and my setup was awesome for relaxing.  However, I wasn't sleepy.  Since I was sort of in civilization, I ended up watching Netflix on my phone until I got sleepy.  That took a lot longer than I thought, but I finally dozed off somehow.

Sometime in the wee hours of the night I woke up chilly.  Not freezing, but very uncomfortable.  Even though I didn't think I would need a blanket or sleeping bag I'd neglected the fact that I needed a liner in my hammock.  All of my body heat was escaping through the bottom and I couldn't go back to sleep.  While that was a dumb mistake, somehow I had the foresight to put one of those space blankets in the pocket of my hammock.  I grabbed it, and in the darkness of night I'd managed to remove it from the package, unfold it, and wrap myself up like a burrito.  If you've ever unwrapped one of those things, you will understand how difficult that was.  Anyway, I figured that I would be good to go and would fall right back asleep.

That did not happen.  I tossed and turned (normal for me anyway), but every move I made in that blanket sounded like I was in a fight with a potato chip bag.  I was so annoyed and couldn't stop thinking about how I needed at least a lightweight sleeping bag from here on out.  Lesson learned.  Eventually I fell back asleep and didn't wake up until daylight peered through the opening in the rain fly.  I woke up, answered the call of nature, and started tearing down my campsite. 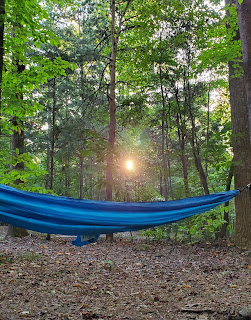 Whatever chill I fought in the darkness was gone with just that little bit of sunlight.  I wasn't too tired and for some reason felt like I'd managed to get a decent amount of sleep.  While not an ideal night in the woods, I already had several things upon which I could improve.  As I munched on some shitty, processed breakfast pastry thing and a large can of coffee/energy drink combo I finished packing up everything and rolled out of the campsite towards home...

It was only a little over twenty miles to get home, and I was pretty excited about the route I had planned.  Lots of gravel roads through beautiful forests.  As a bonus, it was so early in the morning that I had those roads to myself.  Definitely the best kind of ride.

My biggest concern before my first overnight bike trip was how my legs would respond after riding all day, sleeping in a hammock, and riding again the next day.  It turned out not to be a big deal.  Sure, my legs were a little tight and my ass was sore from the saddle, but spending time in a hammock with my legs elevated made for a good next day bike ride.  The first part of the ride home was pretty hilly with some punchy climbs thrown in for good measure, and I had no issues at all.  I was exploring the woods in the early morning hours on a beautiful day, having a blast trying to figure out where these mystery roads would take me.

Trespassing?  Who gives a shit.

Eventually my time in the forest came to an end and I wound up near the airport here in Charlotte.

I don't live too far from there which meant that my adventure would soon come to an end.  I was a little disappointed, but very happy that I'd done something like this.  As I spun through the last couple of miles towards the B-43 Worldwide Headquarters, I starting going over what went wrong/right for my first overnight bikepacking adventure...

Distance:  I had really underestimated the amount of mileage I could do for this trip.  I've been spending every weekend since May putting in big miles, but for some reason I was afraid of not being able to get home if I pushed to hard before I camped for the night.  What a crock of shit.  Next time I do an overnight trip I'll push myself harder.

Gear:  During each ride I'd done up to this point, I've been carrying everything I needed for an overnight trip, even though this was the first one.  Weight is not an issue since I'm used to it now, but I realized that after waking up cold in the middle of the night I should probably invest in a lightweight, pack-able sleeping bag of some sort.  And it wasn't just about the cold either.  The emergency blanket should be used for just well, emergencies.  The noise from that shit was irritating AF and it slid around so much during the night that it barely kept me warm.  That was the biggest lesson learned.

The actual ride:  I had no issues with the ride and total distance whatsoever.  I felt good the whole time, and that's no doubt because I've been riding so much with all my shit on the bike.  I know my body pretty well at his point too, so staying hydrated and fed is something I don't even worry about anymore.

Overall, it was an awesome trip.  Even though the end game here is to drag my ass across Florida, I think I may have found a new hobby as well.  I really like camping anyway, and riding my bike to/from makes it moar better.

The next step in my "training plan" is to build up to even longer distances as I begin planning the next big overnight trip..
Posted by TheMutt at 8:23 AM