I'm Only Happy When I'm Suffering

Just so you can keep up, this is part two from the last time I posted...

More climbing.  That's what you get around here, especially near Crowders Mountain.  My legs hurt, mostly because this was the longest ride I'd attempted in a very long time.  About two miles into my return trip, I started having regrets about not camping overnight.  But then I did something I've done a million times...

I embraced the suck.

My legs hurt.  It was hot.  My bike was loaded with everything but the goddamn kitchen sink.  Who gives a shit.  I had to get home under my own power.  So I kept going.

I made a brief stop to check out the view though. 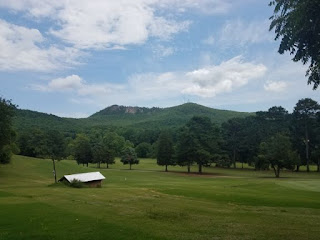 After a little while, my legs felt sort of okay.  I remembered back when I rode all the time and this type of mileage wouldn't have been shit to me, so I used that memory to keep pushing forward.  The plan was to build up to something bigger, and you can't grow without some pain.  I started looking for little victories.  That shitty road section, the steep ass climb, the energy sucking grassy easements.  Anything that I could tell myself was progress. 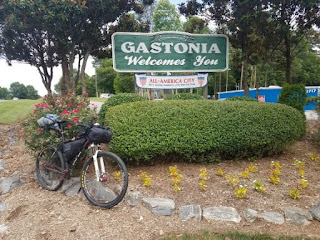 Though it's sorta right next door, Gastonia seemed forever away.  But it was closer to home.  I was taking a different way home and made a wrong turn that put me on the main drag, but at least I had the safety of side walks.  I stopped to check the map to correct my course (to get TF out of civilization as much as possible), and when I turned around I saw a shit storm brewing. 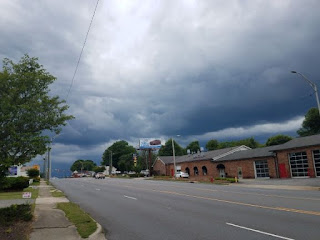 Okay, maybe I didn't think actual shit would fall from the sky.

That was some ugly sky action creeping up on me.  Before I had a chance to make a plan, it started pouring rain.  I had a rain jacket with me, but pouring rain turned into a storm that a light jacket would not repel.  High winds, lightning, and stinging rain sent me for cover.  Since I was in "civilization", cover was easy to find.  I darted towards a bank drive through to wait it out. 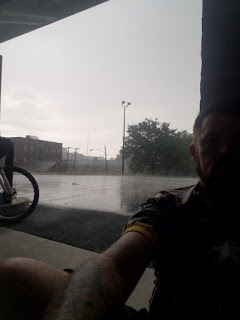 My legs didn't need a break, but I also didn't need to get struck by lightning.  However, since my legs felt okay I was worried about taking an extended break.  So I used my time wisely to stretch. 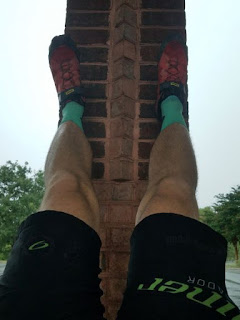 After what seemed like forever (which was only about 45 minutes), the rain slowed and the lightning stopped.  I kept going because I had to.  With the sky still looking really ugly, I took my chances and got off the main drag.  It was barely sprinkling at this point, and the cool rain felt good to me.  After some more cut-through shit I found myself crossing one of the two rivers in my path on the way back home. 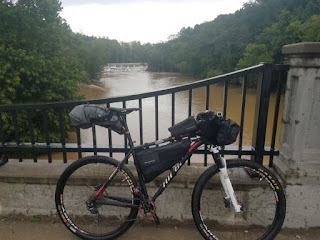 That was another small victory for me, but I was actually running out of energy.  I was so close to home but daylight was fading.  I pressed on through the hurt, eventually crossing the Catawba River and making the climb back towards home.  A power line cut and a shitty road section later and I was home.  The whole thing took me over ten hours, including the time I waited out the storm.  The time is important, because my goal is to improve upon this in the future.  Little victories, remember?

I'd completed a hair over 50 miles, which was the longest bike ride I'd done in quite some time.  Despite some bad weather and a little discomfort I was home safe and sound.  The important lesson I learned that day was that I could actually do all that in one day, as opposed to the stupid plan I had of doing an overnight and riding it in two days.  I also learned that I am actually happier when I'm suffering.  Or at least when the suffering is over.

I still had an overnight trip on my mind though, but I would have to ride a longer distance to make it worthwhile.  So, I started planning some longer day trips to build up to an acceptable distance for an overnight.

I'll get into that next time I guess, and maybe tell y'all what the big goal is.
Posted by TheMutt at 8:19 AM