Other than just needing some adventure?  Well...

Who would want to ride for so long that their ass goes numb, every part of their body hurts, and they can barely see straight?  Well, I would.  I mentioned in the last post that I am an idiot.  There's more to it than that though.  The simple fact is, I ride a desk all day inside a climate-controlled environment.  I get up and walk all over my building, up and down stairs on occasion, but mostly, I sit.  Our bodies are not designed for that shit.  Everyone wants to take it easy, relax, etc., but is it really relaxing when you don't do a damn thing in the first place?  I'm not saying that having a job like this isn't difficult, but it's not hard on the body.

I know most people (here where I work and I would venture to guess most other places as well) do the following:  Wake up, climb in a little box on wheels, drive to another box, sit all day in that box, and when work is over climb back into that box on wheels, and ride back to the home box for the night.  Sure, there's eating, laundry, etc. but lets face it...  They are in a box all damn day.  Those same people complain about the weather (right now it's too hot, but soon it will be too cold.)  But why?  The weather makes you uncomfortable for what?  Maybe fifteen minutes out of the day while you get in/out of the aforementioned boxes?  And you need to relax?

GTFO with that nonsense. 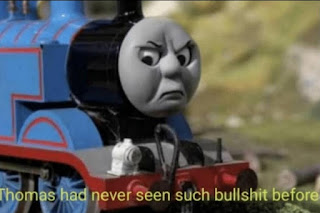 Some days, I spend all day inside those boxes too.  You know, because life.  I guess that's fine sometimes.  But most people I see spend the majority of their lives this way.  I guess it's because they don't want to be uncomfortable.  Or they just like bitching about anything and everything.  I'm no expert though.  Who gives a shit.

Anyway, back to bikepacking.  When I decided to suddenly become a bikepacker (or amateur homeless person, thanks Dicky) I went all in.  The rides got longer, the bike bags multiplied, and I suddenly figured out what kind of shit I needed to put in those bags.  I started with short day trips, but I knew I would eventually get to using this: 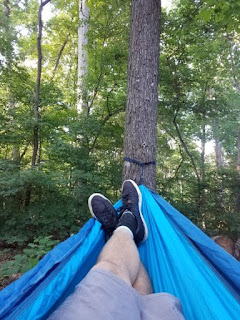 I've slept in that hammock in The Pisgah before, but not because I packed it on my bike and rode there to do it.  So naturally I wanted to do an overnight trip, and my pal James told me I should (because of the big plan thing I haven't talked about yet.)  I didn't want to ride way too far, camp, then ride home (for fear of not having the legs to actually make it) so I planned something small(ish.)

I found a good route of mostly back roads and off-road to Crowders Mountain State Park, west of here.  I figured at twenty five miles out and twenty five back I'd be okay, and with all those trees I could throw up a hammock pretty much anywhere.  I know, fifty total miles in two days doesn't seem like much, but for someone that had been riding very little it was a huge step.  My fitness was like my love for riding...all but gone.

With a solid route and all my gear loaded, I was ready.  Then some home stuff took away my second day, my my stubborn ass wouldn't change the plan (much.)  I'll just ride out there, set up the hammock as if I were camping, pack it up, then ride home the same day.  I wasn't sure if I had that distance in me, but you know my motto... Who Gives A Shit.

I took off, meandering through some back roads across the river towards the monadnock that is Crowders Mountain.

I took some quiet roads... 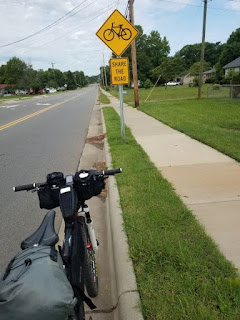 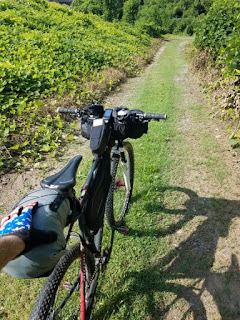 And even a greenway conveniently heading in my direction... 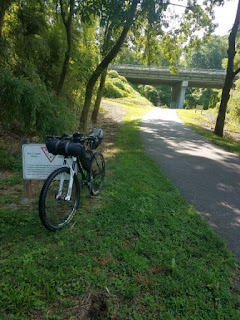 About fifteen miles in, I stopped for food/drinks at the last sign of civilization.  Then I looked up and saw my motivation for the day... 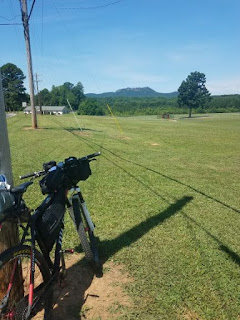 After that it was back roads and even a really backwoods dirt road I stumbled upon.  I took a chance with it, even though there were shotgun shells scattered everywhere and dogs running around. 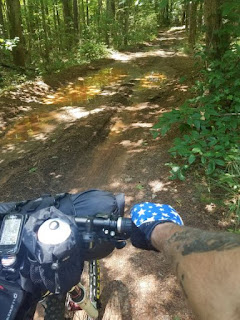 I made it out, hit a little section of paved road, then a steep ass climb finally put me at my destination... 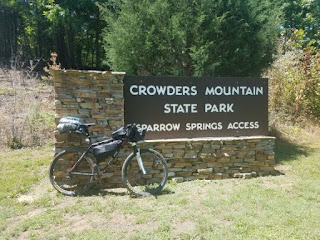 I was pretty tired, mostly because that was one of the longest rides I'd done in quite some time.  I set up my hammock, ate my lunch, and relaxed while I wondered if I had the legs to get home.  I sorta felt okay, but I really wish I could have just slept in that hammock for a while.

After digesting my food and getting re-hydrated, I packed up my hammock, etc. and started my journey towards home.  My legs felt like shit.

Tune in next week to see what happens next, even though it's pretty obvious that I'm not still out there.