It Was A Race I Guess

Last night was yet another installment of the Summer Series, and I was there. While I’d like to tell you that I tried my best to have a great race, that wasn’t the case. Sure, I enjoy racing on occasion, but last night wasn’t one of those times. With the XTERRA Whitewater coming up soon, I’m using these races as training rides. There’s no need to kill myself out there fighting for position, especially since most of these guys are a lot faster than me. I just showed up, signed up, and hit the trail. 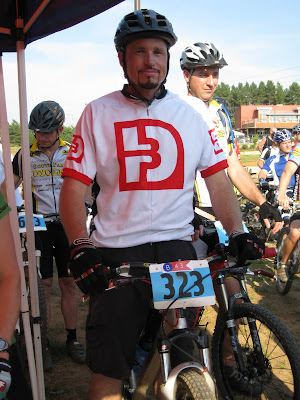 First, I’ll tell you that it was hot. Even though I spent all of my life (up until the last three years) living in Florida, mid to upper 90’s is hot no matter where you’re from. It didn’t bother me too bad though, except for the fact that I was a little dehydrated. Drinking copious amounts of beer the night before probably didn’t help with that, but I did make an effort to rehydrate myself all day prior to the race. I’m not a camel though, so it seemed like a wasted effort. 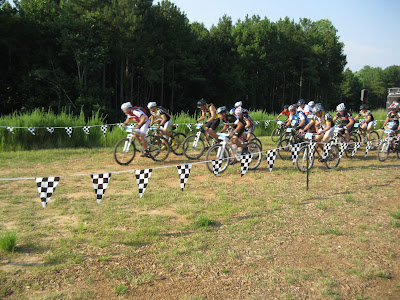 When the race started, I took off at kind of a leisurely pace. I stayed towards the middle of the pack, and didn’t really fight for position. It was nice to not have all of the pressure of a race weighing me down, especially since I didn’t have the usual pre-race jitters. While I was riding, er racing, all I could think about was the XTERRA. I paid close attention to the climbs, trying to plan some sort of strategy. Since I was in a race though, I probably should have paid attention to that. I kept up with the pack for most of the first lap, even without trying too hard. Sure, these guys are fast, but I was right there with them for the most part. It’s amazing what you can accomplish without even trying (and without the pressure of a race.)


I continued on my training ride/lap one, and I felt pretty good. Well, except for the fact that I was really thirsty. I drank from my bottle on occasion, but I tried my best to ration it so I would have something left for lap two. Since I didn’t plan on needing so much water, I didn’t have anyone waiting at the start/finish line to exchange water bottles for me. I did however, see Little Miss Sunshine waiting for me with the camera as I came through to start lap two. 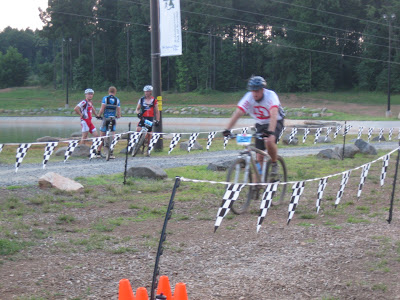 The photo isn’t blurry because of Little Miss Sunshine’s poor camera skills, rather it was due to the fact that I was actually going kind of fast. I’m not sure why I turned it up at that particular moment, but I wouldn’t continue that pace much longer. I slowly gave up my mid-pack position, and settled in to a “training” pace. I would love to tell you that I went out fighting, but that would be a lie. I kept up a decent pace though, and actually enjoyed most of the rest of the “race.” I was able to attack all the climbs pretty well, and I handled the descents with ease. I just didn’t feel like pushing as hard as I could, and I was okay with that. When the race finally ended, I didn’t even check to see how I did. I got in a good training ride, and I was satisfied. I guess I’ll turn it up after the XTERRA Whitewater, but for now I’ll just use the Summer Series as part of my training. I mean, if I get too serious in these races, I could end up getting hurt or even breaking something on my bike. That would suck.

This guy from last night’s race knows what I’m talking about: 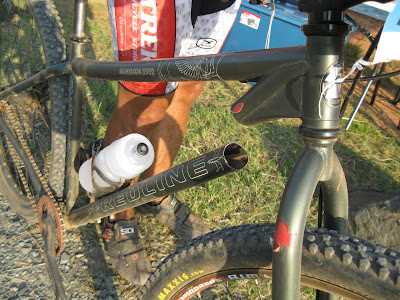