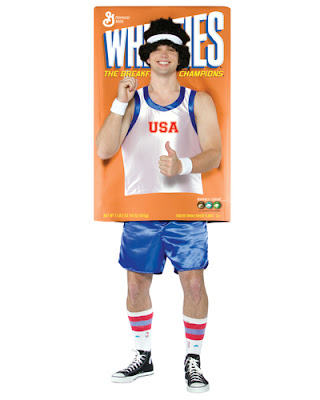 Oh yeah, that shit is only for superstars. Even though that description comes nowhere close to describing me, I still had dreams of getting my ass (and the rest of me of course) on some sort of cereal box. This past Saturday, I had the chance to “compete” in the North Carolina State Games. Here is a description of the State Games I jacked from the website:


I arrived on the scene way too early for the start of the race, so I took my time getting ready. Eventually, I hooked up with the MadSS and went out for a warm-up lap, which was pretty fun. Since it was already super hot outside, it didn’t take long to warm up. At this point I should also mention that the warm-up pace that the MadSS uses is faster than most people’s regular pace. It felt good though. Hopefully my racing number would be lucky for me: 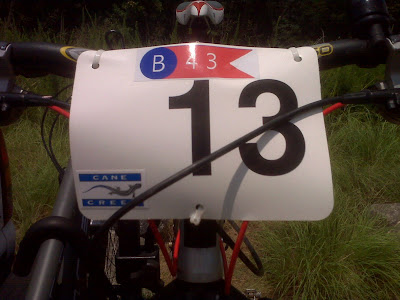 
When we lined up at the start, I felt ready. I looked over and saw Little Miss Sunshine with the camera ready, and the Space Cowboy was standing near her, fresh off of his volunteer trail marshaling duties. We were given the start signal, and I kind of took it easy. Just when I thought it would be a nice leisurely ride, I heard the Space Cowboy yell out, “You’re gonna let him have the holeshot?” Shit, he was right. 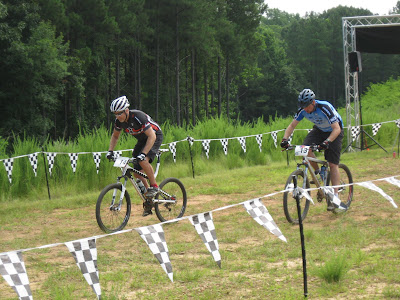 Just like that, I turned it on. I fought my way past the leader to enter the trail first. I pedalled my ass of to stay in the lead too. This guy wouldn’t quit, so I mashed even harder. I was hoping to take it easy, especially since I would be doing two laps out there. He was going for his personal best however, so he was willing to battle it out. I took a sharp, bumpy turn, and something weird happened. While I was up off of my seat, one of the roots jarred my bike, sending the tip of my seat into a not so pleasant place. Ouch. I let my fierce competitor by at the top of a climb, and bid him farewell while I recovered. I stuck to him as best I could, but I was hurting. I managed to finish the lap, and actually started gaining speed while I did it. I came across the start/finish line as fast as I could go, soaking in the cheers of the crowd. 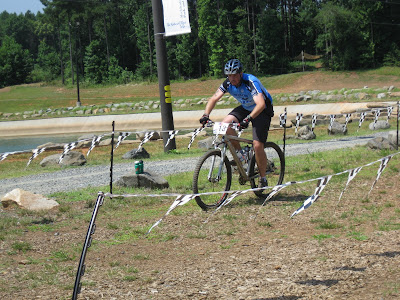 Lap two felt a lot better. I had plenty of energy, and my uh, pain had subsided a bit. I hammered away in hopes of catching the leader, but he was nowhere in sight. I didn’t care, since I was riding my best at this point. I pushed as hard as I could on the climbs, and took the downhill sections without using too much brake action. I was definitely faster, but would it be enough? I had no idea, but I was gonna go down fighting. In addition to competing for a medal, this was also another “training ride” for the upcoming XTERRA Whitewater. I was putting it all out there, no matter what happened.


Near the end of the second lap, I still hadn’t seen Mr. First Place Guy. Did he DNF due to a mechanical or a crash? Was he hiding in the bushes somewhere to take me out and guarantee his win? I had no idea, so I kept looking around while I pedalled faster. When I came out of the woods for the last time, I shifted into the big ring and hammered away. I came across the finish line as fast as I could go, hoping that I made the cut. I guess I had fun though, because I was smiling. 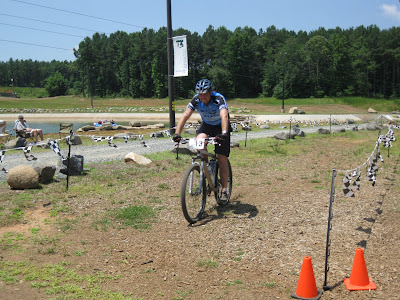 I found out that I didn’t catch my fierce competitor, but I was still happy. I fought hard in this race, and I was proud of my efforts. When my name was called for the podium, I quickly put my Cane Creek jersey back on and went to get my medal. 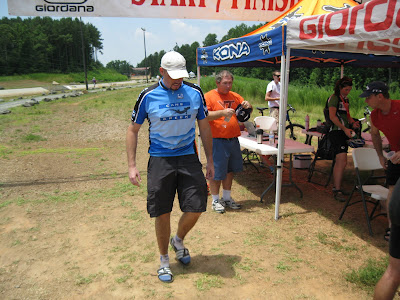 Little Miss Sunshine was waiting there to award me with my silver medal, which I graciously accepted. I know, it looks a little suspicious that my own wife awarded me a medal, but I did in fact earn it. You conspiracy theorists can go to hell, or send me plenty of hate mail. Either way will be fun, since I love conspiracies. I took my place on the podium, next to my nemesis (for the race anyway.) 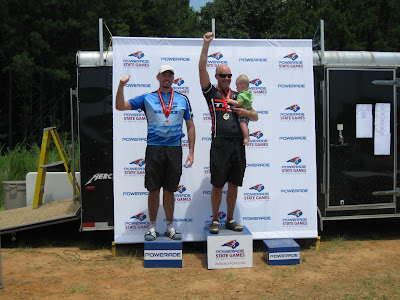 After standing there on the podium, I realized how he was able to keep the lead. He must have had some tiny motor on his bike, powered by that very small human he’s holding. That’s okay though. Next time I’ll get some kind of motor thingy myself, and I’ll let Lunchbox power it for me. He’s a much bigger human, which will allow me to crush the competition next time. We’ll work on that when he gets back from Florida.

I had a great time at the North Carolina State Games. The event ran smoothly, which is not surprising since it was put on by my pal Neal from Charlotte Sports Cycling. He always puts on top-quality cycling events, and this one was no exception. Even though I’ve been on the podium before, this one felt great (it’s been a little while.) I won a silver medal, and I actually had to work for it. Only in America. 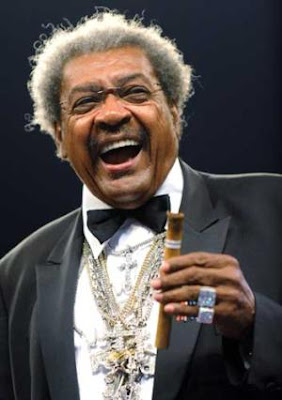